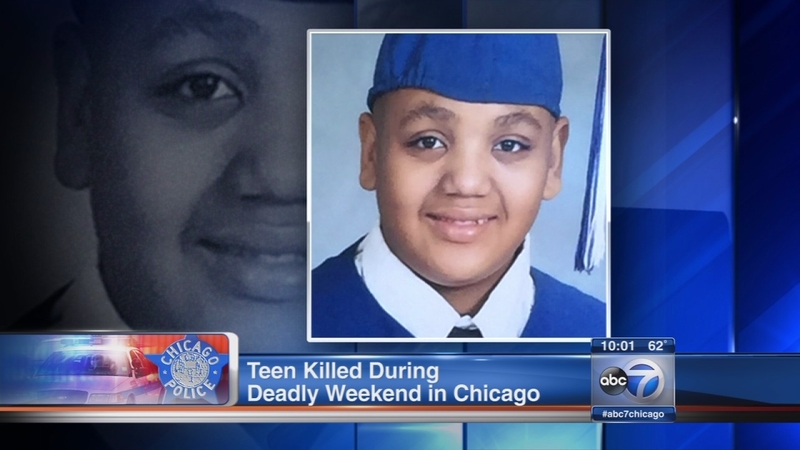 CHICAGO (WLS) -- A 14-year-old boy was killed and a 15-year-old boy is recovering after a shooting on Chicago's South Side Saturday night, police say.

Police say a car drove by on the 4400-block of South Greenwood and someone inside started shooting.

The 15-year-old is recovering at University of Chicago Comer Children's Hospital with two leg wounds. Police are still searching for the shooter.

Mayor Rahm Emanuel plans to move hundreds of police officers from desk duty onto the street to fight crime. Unfortunately, it is too late for 14-year-old Tyjuan Poindexter, who had just begun his freshman year at Wendell Phillips Academy when he was killed Saturday night.

As police circle the North Kenwood block, neighbors took advantage of the nice weather by spending time outside Sunday night. A quiet night in a neighborhood that is just six blocks north of President Barack Obama's house.

Twenty-four hours earlier, it was a much different scene near the corner of 44th and Greenwood. Tyjuan Poindexter was killed in a drive-by shooting as he and some friends were walking to a nearby school park.

"There were a lot of rapid shots, about five to seven shots, something like that," said neighbor Carolyn Evans.

Evans lives just steps where Tyjuan was killed and another boy injured. Police say neither Tyjuan nor the other boy who was injured had criminal records or any gang affiliations. Tyjuan's family says his mother was over protective of her son, never allowing him to go out on his own with friends until he begged her Saturday night. She gave in only to get a devastating phone call minutes later.

"We didn't want him to go (Saturday) after school, he kept bugging his mama to go," said Michael Gabb, Tyjuan's grandfather. "Next thing he know, my wife called me to tell me he got killed."

With another deadly weekend in Chicago, Mayor Emanuel announced Sunday a plan to move 319 police officers out of administrative roles and put them back on the street to fight gun violence.

Evans welcomes more officers, but says in her neighborhood, a constant police presence didn't save Tyjuan.

"That area right there is well-patrolled," she said. "There's always officers or police vehicle sitting in that area," she said.

Neighbors said what would help would be more officers on foot or bicycles.