Sister Jean, 101, cheers on her beloved Loyola Ramblers at 'The Big Dance' in Indianapolis 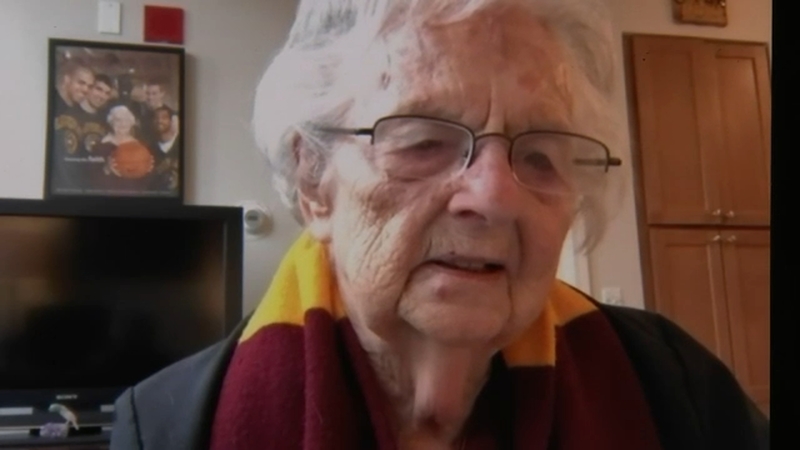 CHICAGO (WLS) -- Sister Jean is getting ready for another chance to shine in the national spotlight.

She's in Indianapolis this week, to cheer on her Loyola Ramblers in the NCAA tournament.

"Being Cinderella happens I think only once in a lifetime," said Sr. Jean Delores Schmidt.

At 101 years old, Sister Jean has had a pretty good lifetime. But her beloved Loyola Ramblers are no longer the Cinderella story they were in 2018 when as a number 11 seed they went on a roll that took them all the way to the Final Four.

It made their then 98-year-old chaplain, Sister Jean, a celebrity.

RELATED: 'Most fun I've had in my life': Sister Jean says as Loyola heads to Final Four

"She's a very unselfish, giving person. The university is blessed to have her and just stands for and what she represents," said David Kupiece, President, Loyola Alumni Board.

But Sister Jean has been unable to be together with her beloved Ramblers basketball team. She has watched all the games but because of the pandemic she has not been able see them in person. She sends each player an email and a prayer before and after each game.

"It's been lonely without seeing them because I always felt free to go to practices and went to every home game," said Sister Jean.

In fact Sister Jean has not been on the Loyola campus since last year's basketball season came to an abrupt end because of CCOVID-19 last march. She is excited to be able to return to the NCAA tournament. She's filled out a bracket that has her Ramblers beating the University of Illinois in the second round and making it to the Elite 8.

It's an exciting time for the university but Sister Jean said she is most excited about being back around her team.

"These young people keep me young, even though I'm 101. I consider myself young at heart," she said.