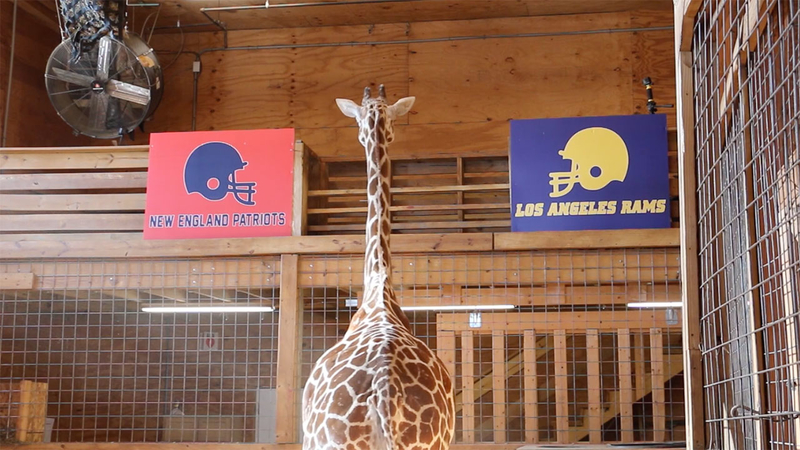 HARPURSVILLE, NY -- This Super Bowl, April the Giraffe has her sights set on the New England Patriots.

The giraffe whose 2017 pregnancy captivated the world chose the Pats over the Los Angeles Rams in a matchup from her upstate New York home. Staff members at Animal Adventure Park set up two signs in April's enclosure, with the Patriots to the left and the Rams to the right. Video released by the park showed April as she walked up to the signs and poked around before extending her nose toward the Patriots sign.

Super Bowl 53 marks the second year in a row that April has chosen the Patriots -- her neighbors to the north -- who fell to the Philadelphia Eagles in Super Bowl 52.

Though April is beloved by many, not all of the giraffe's fans agreed with her prediction.

"Good, that means the Rams will win since she chose the wrong team last year!" one Facebook commenter quipped, with another joking that the giraffe was suffering from pregnancy brain.

For 2019, though, the odds are on April's side. As of Jan. 31, New England has a slight statistical advantage for a victory, according to FiveThirtyEight. The website gives the team, headed to their third consecutive Super Bowl, a 53 percent chance of winning versus Los Angeles' 47 percent shot at clinching the Lombardi trophy.

Things on the internet are made to be shared, and there are some stories that rise above the rest and take on a life of their own as they dominate the internet.