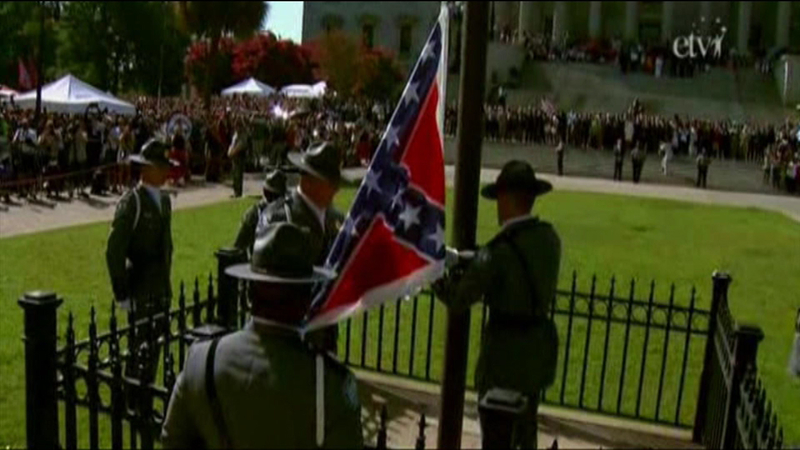 CHICAGO (WLS) -- Reactions to the Confederate flag's removal are as varied as the people you ask. The event not only sparked emotions, but also a debate about whether the banner's removal would have an effect on race relations in America.

Yaki Hillery says he knew it would happen someday.

"Some things are truly designed to expire," he says. "This is a situation where it has expired."

Friday morning the Hyde Park barber, along with some of his clients, witnessed American history as the Confederate Flag was removed from South Carolina's statehouse where it flew for 54 years.

The rebel flag's demise comes after it was featured in an online, racist manifesto by alleged shooter Dylann Roof which emerged following the massacre at Emanuel African Methodist Episcopal Church in Charleston in June.

Other Chicagoans watched the flag come down while eating breakfast at the iconic Valois Restaurant.

"I think the Confederate flag doesn't symbolize what it means to be united as one people," said Tammy Stelnicki.

"It definitely makes everyone more comfortable coming to the U.S.," said Thomas Morales.

Retiree Mary Ward, a native of Mississippi, says the brief ceremony was emotional and moving.

"I was taught if you see that flag displayed, it's a bewarement being an African American or black person," she said.

Historians say that while the Confederate flag started as a symbol of the unified southern states' secession, it has come to represent inequality and discrimination.

"Historically, it does represent a society that totally embraced the idea that African Americans were not equal," says Russell Lewis of the Chicago History Museum.

Flag supporters continue to rally around their banner. The Sons of Confederate Veterans Camp Douglas 516, located in Chicago, shared a post on their Facebook page calling the flag's removal "...a politically convenient insult to the legacy of millions of South Carolinians."

The post's author also vows that, "...as this particular flag comes down, thousands more are being lifted, for the St. Andrews Cross stands not for hate, but for love."

While many try to absorb the significance of the flag's removal in South Carolina, resistance to other confederate symbols is growing. The Virginia division of Sons of Confederate Veterans is preparing to go to court over their specialty license plates, where has their flag-themed banner displayed prominently.

THE CONFEDERATE FLAG COMES DOWN IN SOUTH CAROLINA

For the first time since the civil rights movement, the Confederate flag was removed entirely from the South Carolina Statehouse, in a swift ceremony Friday before thousands of people who cheered as the Civil War-era banner was lowered from a 30-foot flagpole.

Many people believed the flag would fly indefinitely in this state, which was the first to leave Union, but the killing of nine black church members during a Bible study in Charleston last month changed that sentiment and reignited calls to bring down Confederate flags and symbols across the nation.

The crowd, estimated at up to 10,000 people, chanted "USA, USA" and "hey, hey, hey, goodbye" as an honor guard of South Carolina troopers lowered the flag during a 6-minute ceremony. Gov. Nikki Haley stood on the Statehouse steps along with family members of the victims and other dignitaries. While she didn't speak, she nodded and smiled in the direction of the crowd after someone shouted: "Thank you governor."

Haley supported the flag before the shooting, but the Republican had a change of heart in the days after the killings and led the push to get legislators to pass a bill before the end of the summer. She signed the legislation Thursday.

As she looked on, two white troopers rolled up the flag neatly and tied it with a white ribbon. They handed it to a black trooper who brought it to the Statehouse steps.

Highway Patrol Cpl. Rupert Pope downplayed the significance of their race in the ceremony.

"We're all gray," he said, with the other officers nodding in agreement. 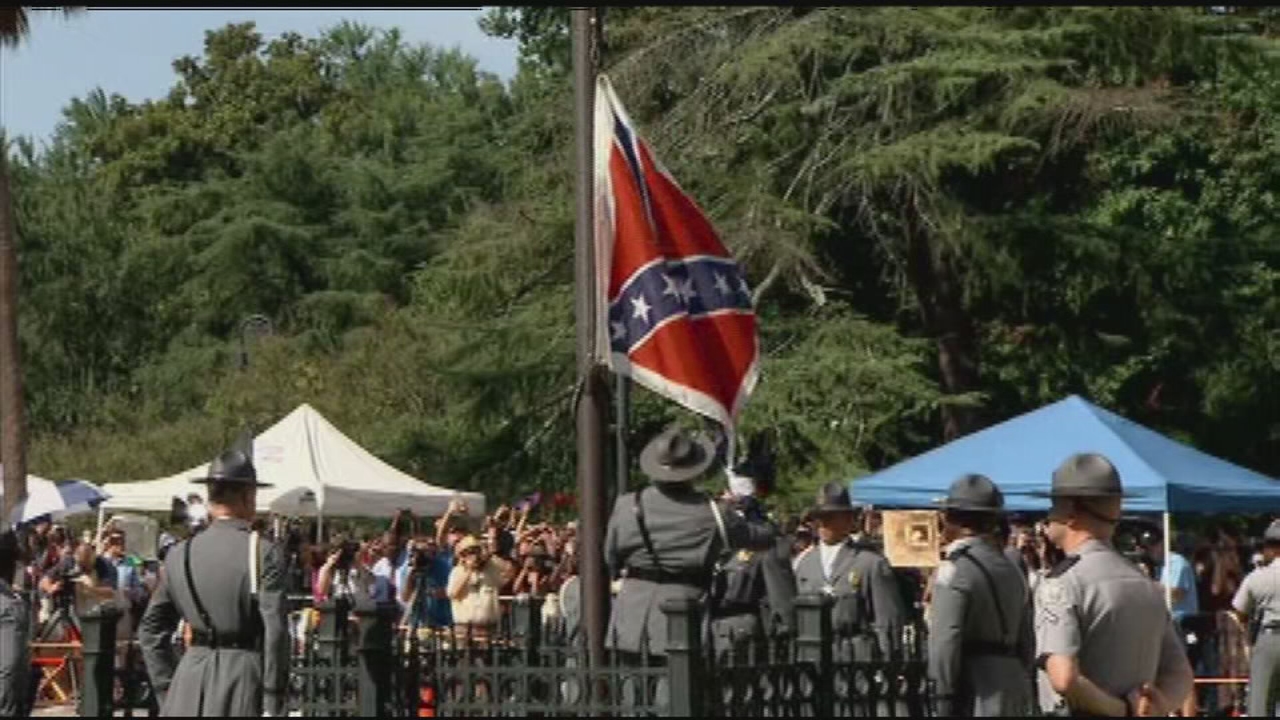 President Barack Obama tweeted minutes after the flag was down, saying it was "a sign of good will and healing and a meaningful step towards a better future." Obama delivered a eulogy at the funeral for state Sen. Clementa Pinckney, who was also pastor of the church where the killings took place.

The honor guard was the same group of men who carried Pinckney's coffin into the Statehouse for a viewing last month.

A van brought the flag to the nearby Confederate Relic Room and Military Museum. There, it eventually will be housed in a multimillion-dollar shrine lawmakers promised to build as part of a deal to get a bill passed removing the flag.

South Carolina's leaders first flew the battle flag over the Statehouse dome in 1961 to mark the 100th anniversary of the Civil War. It remained there to represent official opposition to the civil rights movement.

By Friday afternoon, both the flag and the flagpole had been removed.