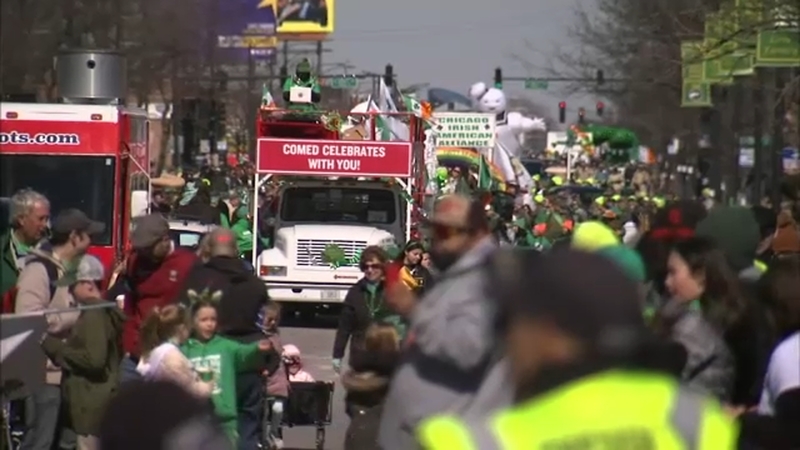 A traditional Irish parade kicked off at noon near 103rd Street and Western, and marched its way to 115th Street.

The community, local businesses and leaders are happy and proud to welcome people back once again.

"To be able to get back to the parade and get back to that little bit of normalcy, we're really excited for that," said South Side Irish Parade co-chair, Don Larisey.

With about 100 floats, 15 bands, and hundreds lining the streets, it's the tradition that keeps bringing people back to the South Side Irish Parade.

I've been here since I was just a small child. I grew up in this neighborhood so I love it," said Joanne Rush.

"That's just a tradition in our family," added Barb Ramos.

Darrell Schuyler said he's been dressing up for the holiday for 12 years.

"Every year I add more and more to the outfit," he said. "I did my hair the first year and after that, I've added every year. I added the kilt, the socks, the shillelagh and everything else and all the kids love it."

"It's probably the busiest day, especially for businesses up and down Western Avenue, so it's good to get everybody back out and start spending money again," said Dan Letz, owner of Letz Box Chicago.

Letz said it's also a very important day for them after such challenging times.

"Our businesses are supported, our bars and restaurants. This is a big day for everybody and there's a lot of people that come to see us in our neighborhood and our community -- maybe just for the parade, but it turns out a lot if you want to come and enjoy the neighborhood," he said.

It was still a bit freezing out there, but the city was pretty excited to keep some traditions going in the neighborhoods.

Chicago's Northwest Side Irish parade was also Sunday at noon.