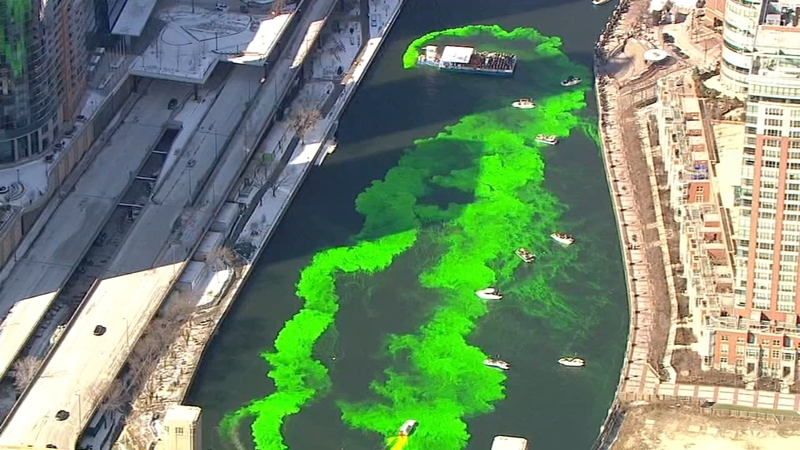 CHICAGO (WLS) -- The Chicago River now runs green! The St. Patrick's Day parade was also back Saturday after a 2-year hiatus, and the crowds were ecstatic.

Chicago's river is once again green and the city's St. Paddy's Day Parade is back after a 2-year hiatus.

"It has been completely crazy. It's a line out the door all the way to the alley," said America Escobar, manager at Miller's Pub.

The day began with a tradition: the dyeing of the Chicago River.

Chopper 7 HD flies over Chicago River as it's dyed green on Saturday.

"This is amazing after all those years of suffering, and the sun is out," said Onur Celik, who was joining in on the festivities.

Last year, the city still dyed the river green -- but did it as a surprise as to not draw large crowds in the midst of a pandemic.

Now, making its return in its 67th year, the Chicago parade drew thousands of people.

"We come every year so we've really missed it the last two years," said Deirdre Kochuearambil.

"You know, it feels good to get back to a new normal," added Jada Smith.

People rang in the holiday by Shamrock'N the Block at Old St. Patrick's Church in the West Loop.

Businesses reaped the rewards after a long pandemic drought.

"We opened at 8 a.m. and by 8:30, we were already at max. It's been like that all day," said Conor Okeeffe, general manager at Emerald Loop

"It's fantastic," said Kavir Dalawari. "It's popping in here, yeah!"

Chicago's St. Patrick's Day Parade will honor essential workers. One of them is this year's queen Kelley Leyden, who works on the South Side as a Chicago police officer.

Fans from all over the country and all over the world descended upon the Windy City Saturday, even those from Ireland itself, who wanted to come check out our Chicago-style celebration.

"Everybody is Irish today in Chicago," said Mary Linehanfoley, who is visiting from Ireland. "It's just amazing here. You have a great country and everybody is so welcoming and every year. Nice good people."

"It's unbelievable," said Cathal Rasmussen, who is also visiting from Ireland. "Super city and we're so happy and so proud to be here. We've had a great week and we're hoping to come back again next year."

The green dye will stay in the river for about 24 to 48 hours, so make sure to come down here and see it while you can.

How can I watch the Chicago St. Patrick's Day parade?

The Chicago St. Patrick's Day parade was broadcast live by ABC 7 Chicago at noon Saturday, but if you missed it, you can watch live on television, abc7chicago.com and wherever you stream ABC7. The broadcast will be posted online to watch on-demand.

Judy Hsu and Ryan Chiaverini hosted the special, with Meteorologist Larry Mowry covering the excitement and pageantry on the street.

What else is going on in Chicago on St. Patrick's Day weekend?

Archer Avenue St. Patrick's Day Parade, Saturday, March 12
The Archer Avenue parade steps off at noon at 53rd Street and South Oak Park and proceeds south on Oak Park to Archer Avenue; east on Archer to Narragansett; south on Narragansett to 5600 S. Narragansett. The parade is expected to conclude at 2 p.m. and will benefit "Get Behind the Vest," a Chicago Police Memorial Fund effort, to provide bullet proof vest covers to police officers.

South Side Irish Parade, Sunday, March 13
The South Side Irish Parade steps off at noon at 103rd and Western Avenue, marching south to 115th and Western Avenue. Parking restrictions in the area begin at 8 a.m. and will remain until 3:30 p.m. on Sunday, but anyone parking in the area that day should read signage before parking. Expect parking restrictions on both sides of the street from 103rd to 112th Streets along Western Avenue. The staging area is located on Western Avenue from 99th to 103rd Streets and Bell to Maplewood Avenues. Street closures along the parade route as well as the staging area begin as early as 9 a.m. The parade is expected to end at 3 p.m., the disbanding area is located on Western Avenue from 115th to 119th Streets. For additional details, visit southsideirishparade.org.

Northwest Side Irish Parade, Sunday, March 13
The parade steps off at noon at Onahan School, at 6634 W. Raven St. proceeding south on Neola Avenue to Northwest Highway and north to Harlem Avenue in the Norwood Park neighborhood. Northwest Highway will be closed to vehicles at 9am. Parking restrictions are in effect along the route beginning at 7 a.m. and continue through 1:30 p.m. Both sides of the street on Neola, Raven, Northwest Highway, Normandy Avenue, Imlay, Neva, Palatine and Natoma along the route will be affected. For additional details, visit northwestsideirish.org.

Daniel Murray, 87, started the parade nearly 20 years ago to honor his wife who died in 2002. His daughter Liz, who serves as parade organizer, expects a good turnout.

"We're ready for it," said Elizabeth Murray-Belcaster. "We're really ready to put on a good show. I think the participants in the parade, the dancers, the bands that we have, everybody's excited to be back."