All Day Affair: The time Adrian Peterson dominated the Bears 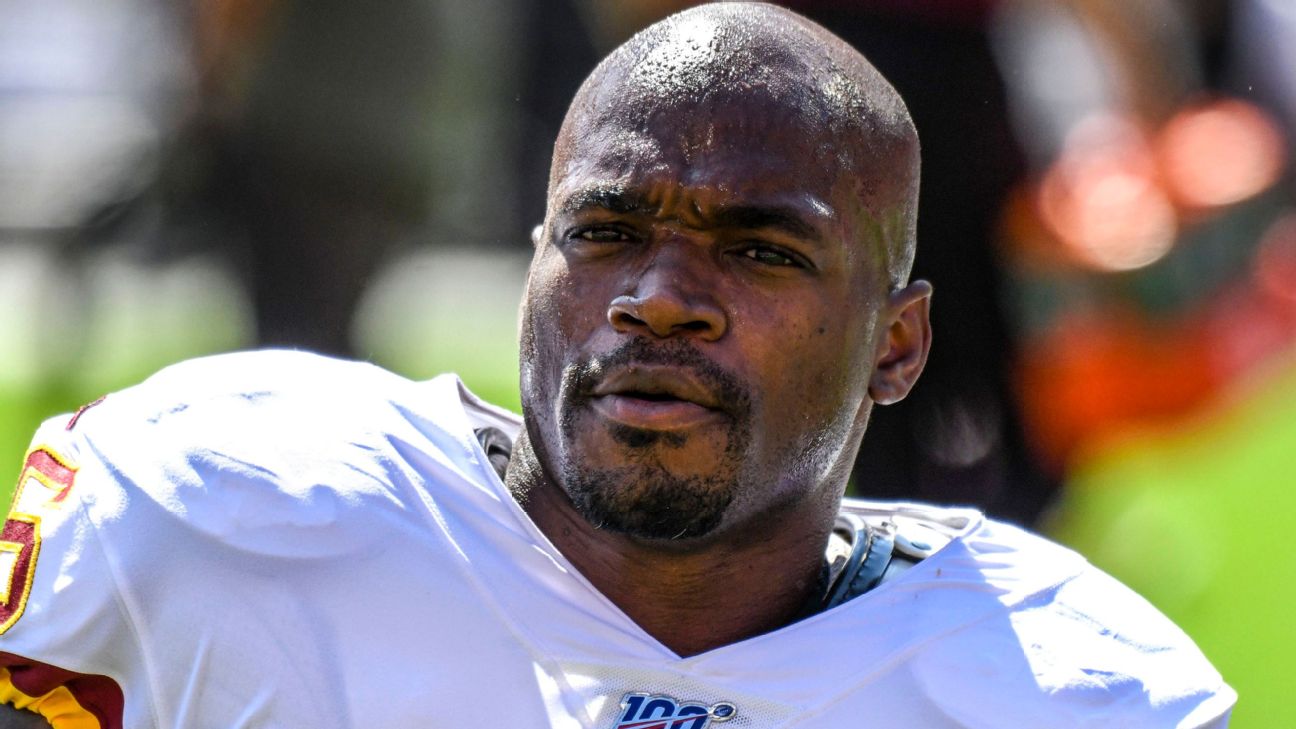 ESPN
By John Keim
ASHBURN, Va. -- His introduction to Walter Payton occurred via the internet. A young Adrian Peterson searched for footage of the former Chicago Bears great. He saw Payton run over defenders; he saw him cut one way as a defender fell another; he saw him sprint past defenders on long touchdown runs.

Eventually, Peterson saw something else: himself.

"I would say I'm more similar to Walter Payton than anyone else," theWashington Redskins running back said as his team prepares to host Chicago on Monday (8:15 p.m. ET, ESPN). "A lot of people say Eric Dickerson because I run upright, but if you look at Walter's and my game, I would say it's similar as far as getting it by any means."

Which is why Oct. 14, 2007 -- a date Peterson loudly introduced himself to the NFL in Week 5 -- meant so much to him. He rushed for a Minnesota Vikings franchise record 224 yards against Payton's old team and at Soldier Field, Payton's former home. Nobody has rushed for more yards or gained more all-purpose yards (361) against the Bears.

All of this coming against a team whose defense led a run to the Super Bowl the previous season.

"That's what made it a big game for me," Peterson said. "It was something I was looking forward to, not only that but playing in this historical stadium where Walter Payton played. It's like, come on, how can you not be prepared to play there?"

There's a reason Peterson has his white No. 28 Vikings jersey from this game framed in a glass case at his home in Houston.

As Peterson prepares to play the Bears once more, it's worth remembering that game. Three weeks later, Peterson made an even louder pronouncement with 296 yards rushing against the Chargers. But Peterson never had more all-purpose yards in one game than he did against the Bears -- and it ranks as the third most in NFL history.

"I get in that zone and get locked in and my nose is smelling that end zone," Peterson said.

His nose must have been working like a bloodhound on a hunt: Peterson found the end zone three times. Here's how it went down:

Peterson's speed to the outside was among the reasons Minnesota drafted him No. 7 overall in 2007. But it stood out even more seeing it in person during the team's rookie minicamp. The quarterback in that camp, Jimmy Terwilliger, had a tough time on the outside zone handoffs.

"I remember how hard he had to run away from center to reach the ball out to stretch it to Adrian," said Brad Childress, the Vikings coach at the time and now a senior offensive assistant with Chicago. "You couldn't deny what kind of speed he had to the edge and watching him cut up was like: Holy cow!"

This play ended with another "holy cow." Peterson again ran untouched on an outside zone to the left, running through a wide gap in the defense five yards downfield. He remained untouched for the first 12 yards. Then Peterson took over: He broke a tackle at the 46-yard line, cut inside a safety sprinting from the middle, stutter-stepped and left cornerback Charles "Peanut" Tillman (a future first-team All-Pro) leaning backward as Peterson bounced around him to the right.

"He was all-of-a-sudden, and once past that initial wave, be careful," former Bears All-Pro linebacker Brian Urlacher said. "That was his whole career. He was so all-of-a-sudden. You didn't want the DB to be one-on-one with him. You always had to make sure you took leverage with him and force to the help. It wasn't like you were tackling Jerome Bettis. That's not to say he was easy to tackle -- in no way shape or form was he easy. But once you got hold of him he went down. You just couldn't get hold of him."

Urlacher said the Bears were well aware of Peterson. He had rushed for 383 yards and a touchdown in the first four games that season. The linebacker had even seen highlights of Peterson from his Texas high school days.

"He might have come out of high school and been good in the NFL," Urlacher said.

Peterson made it look easy on this day, too.

"Just some great blocking and just the effort I was putting in there to get to the end zone," he said. "I was just out there playing football, enjoying myself."

Peterson has used vision and speed to help accumulate his 13,343 rushing yards. This play provided a perfect example of both. He starts right and, as the Bears linebackers flow hard with him, a gulf opens to the left.

Cornerback Danieal Manning has contain, but out of the corner of his eye Peterson saw him falling for quarterback Tarvaris Jackson's boot action. As Manning starts at Jackson, Peterson quickly stutter-steps and bursts to the middle of the field. He shakes another defender, cuts outside to the left and is off.

"That's a great example of feeling that flow," Peterson said. "You feel the flow and actually trusting your eyes and use your God-given ability and quickness, the explosive power to stop on a dime and get back and take over.

"Vision is key to everything. You can take care of the body and all, but you have to have the eyes to be able to see that crease, or to see a hole develop, or to see if a linebacker is scraping over the top."

As on the first touchdown, it became a footrace between he and Tillman. The cornerback dove helplessly at Peterson's feet at the 10-yard line.

"He went from zero to full speed in two steps," said Urlacher after rewatching the play. "It was amazing how fast he was running at the line; he hit the holes and it felt like he was running full speed every time. Maybe he wasn't, but it looks like he was. I saw Peanut trying to catch him; he's not gonna catch him."

Peterson said, "Tillman tried his hardest to get there."

Once again: excellent blocking from the line and speed from Peterson. A one-handed swipe at his legs nearly seven yards downfield failed, as did an attempt by Manning to knock the ball out at the 10-yard line.

"I don't know what he was thinking," Peterson said of Manning.

But this play was indicative, once more, of Peterson's burst. For the day, Peterson averaged a career-best 11.2 yards per carry, a career best.

"If everyone's in their gap, then there's no place to run," Urlacher said. "The problem is he runs through arm tackles. If you pop your head out of the gap for half a second, he's gone. You can't peek and see where he's going. If you do, he's running through the gap. It's his ability to set guys up good, too. He'll set you up and the cutback makes you peek, and once you peek he's gone."

Minnesota blew a two-touchdown lead in the final four minutes and, with 1 minute, 38 seconds remaining, Chicago opted to kick to the rookie.

"Because our kickoff coverage was good," Urlacher said. "Until it happens, you never expect [opponents] to break one on you. We thought we could pin him and didn't. It's not like Devin Hester back there, plus he's still a rookie. We didn't know what we didn't know because he was still a rookie."

Peterson, catching the ball at the 9-yard line, returned it 53 yards to set up the game-winning field goal. It was his fourth return of the day; the first three totaled 75 yards. Hester, a first-team All-Pro return man and receiver gained 272 all-purpose yards that day; he was upstaged.

"We had practiced [Peterson] at kick return, but he wasn't going to return kicks in that game," Childress said. "Right at the end of the game, he had a tremendous game and he says, 'Coach, let me take the kickoff return.' It was good blocking, but sheer force of will."

This was the sort of game Peterson knew he could have; it was the kind of game that Minnesota dreamed of after the draft.

Minnesota knew. That's why the Vikings engaged in subterfuge before the draft. They sweated out Arizona at No. 5, knowing the Redskins -- who picked sixth -- already had their back in Clinton Portis.

"We were so happy Arizona took [lineman] Levi Brown," Childress said. "We were like, 'Yeah!' We were putting disinformation out on [Peterson] that the collarbone was broken and wasn't going to heal and was chronic. He only knew one speed, even in walk-through on Saturday morning we had to grab him by the back of his pants to slow down so he wouldn't run into the offensive linemen. When I watch him with the Redskins, it's full blast."

After the Chicago game, teammates chanted Peterson's nickname -- "All Day! All Day!" -- in the locker room after the game. Peterson, too, knew what this game meant.

"You had some good guys on the other side of the ball," Peterson said. "You had Urlacher; [linebacker Lance] Briggs, Tillman. That Chicago defense was good and me coming in as a rookie and really trying to prove myself. That was the first time we played a defense that solidified 'we're serious as an offense and I'm serious as a ball carrier.'" 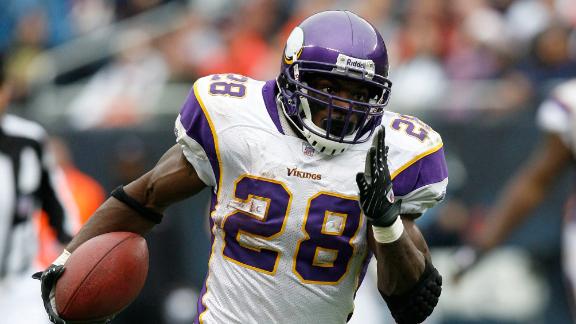