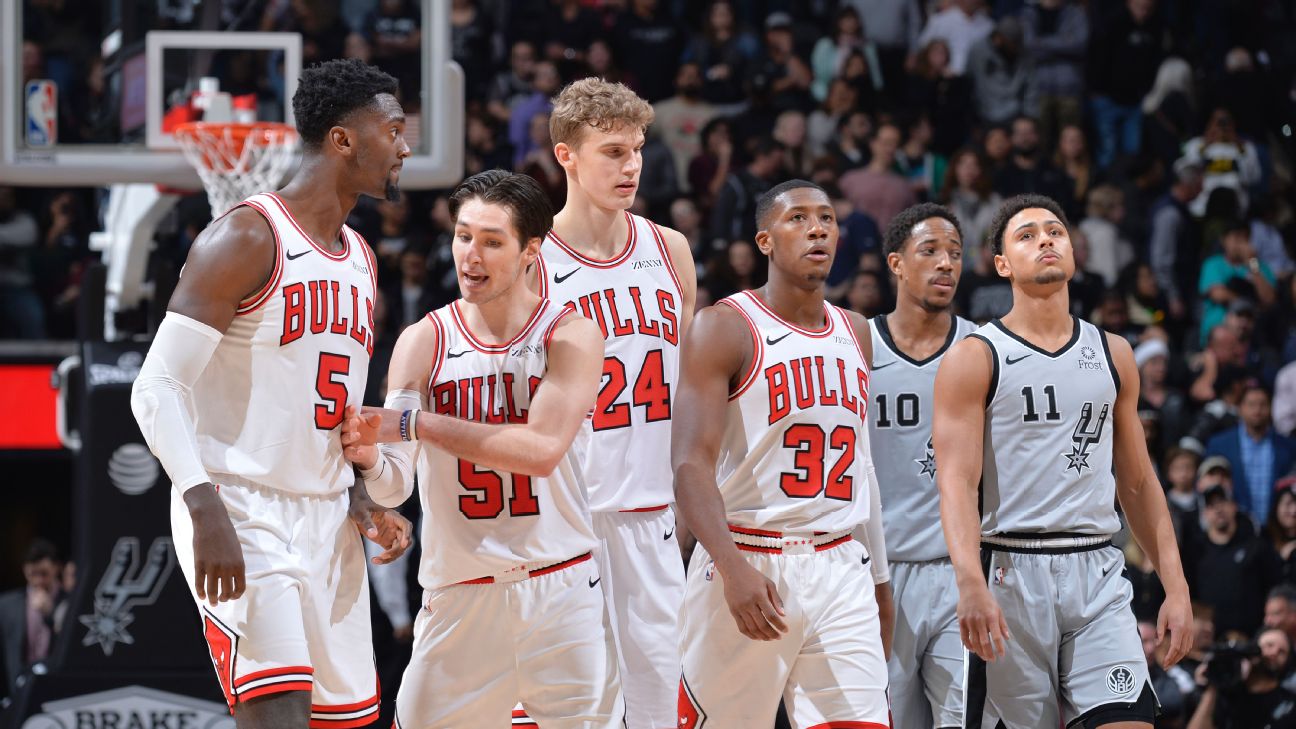 SAN ANTONIO -- Both coaches tossed about the T-word for different reasons Saturday after the Chicago Bulls crushed a 21-point deficit to top the San Antonio Spurs 98-93 -- souring a flawless 4-0 start to San Antonio's six-game homestand.

Out the door and down the hall more than 100 feet, the word "tough" took on a different meaning inside San Antonio's locker room.

"That's a tough loss," Spurs coach Gregg Popovich said. "I give Chicago a lot of credit. Coach Boylen had them ready, and the character and fortitude they showed being down at the half by 19 is a real tribute to what they are trying to establish in Chicago. Their defense took us out of things. We turned it over because of their pressure. The ball stopped moving, and at the right time, they started making some shots down the stretch. They deserve a lot of credit, and that's a real tough loss for us."

Hot shooting (58.8 percent) and fast starts from LaMarcus Aldridge (7-of-9 for 21 points in the first half) and DeMar DeRozan (4-of-8 for 12 points) propelled the home team to a 62-43 advantage at intermission, which typically bodes well for the Spurs, considering they hadn't blown a lead of 20 points or more all season.

But the outcome in this outing marked the fifth-largest lead ever surrendered by the Spurs in the Popovich era, and the Bulls pulled off the rally without shooting guard Zach LaVine, who caught a flight back to Chicago earlier that morning to undergo further evaluation on the left ankle he injured Thursday in a loss to the Orlando Magic.

LaVine won't play on Monday, when the Bulls close out their current two-game road trip, and Boylen said the team doesn't yet have a definitive timetable for when the guard will return to action.

Chicago didn't need LaVine in this one.

"We were down 19, came back out in the second half, and I think we fought well," said Dunn, who made his first start in his third game back from a left knee injury. "In the first half, we weren't making shots. But I thought we played good defense, and they made tough ones. We kept guarding in the second half, and we executed in the fourth quarter."

San Antonio held a 21-point lead with 10:48 remaining in the third quarter, before the Bulls stiffened defensively and started attacking downhill on offense.

Feeling like they had settled for too many jumpers in the first two frames, Boylen stressed "drive the ball, drive the ball" in the locker room at halftime, but he also assured the Bulls that the outcome in this one was "not gonna turn with offense. It's gonna turn with defense."

Chicago would finish the final 22:48 of the game on a 55-29 run, while limiting San Antonio to just 31 points in the second half. And the Bulls couldn't and didn't rely on the 3-ball to get back into contention. No, they hit 16-of-27 from inside the arc during the comeback, as Dunn and Markkanen matched San Antonio's entire output over the last 22 minutes with 29 points on 12-of-19 shooting.

"I thought in the second half we drove the ball better," Boylen said. "Lauri got downhill. Kris got downhill. Defensively, I thought we were pretty good. I'd have to look at the film, but it looked like we knocked a lot of balls loose. We were flying around pretty good."

So good that DeRozan, who took more shots than anyone on either team after the 10:48 mark of the third quarter, missed 10 of his last 14 attempts as the Spurs missed 10-of-11 from deep over that final 22:48. Dunn and Markkanen knocked down more buckets by themselves than the entire San Antonio squad after it built that 21-point lead.

The Spurs only compounded matters with six turnovers over the final 22:48 to Chicago's one, while being outrebounded 23-17.

Aldridge would go on to score just eight points in the second half.

"Unforced turnovers kind of slowed our momentum and kind of gave them comfort," Aldridge said. "They picked up their intensity. They denied us in certain areas. We should've upped our intensity also. We came out sluggish. They came ready to go. They took the game from us. They doubled [me] more and clogged up the lane more. I don't know why they didn't do it in the first half, but they did it in the second half."

"Their defense fueled it," he said.

Dunn poured in his last points on a floater with 38.8 seconds remaining, an 18-foot pull-up jumper with 8.3 seconds left and the two free throws with three ticks left on the clock.

Overall, Chicago scored on each of its last five possessions of the game.

"It shows a lot of heart for the team to climb back," Markkanen said. "Obviously, it takes energy to dig yourselves a hole, and then we've got to climb back up. But it just shows what we can do. If we play like that as a team, we have a chance to beat anybody. So we've got to get the whole 48 minutes."

Saturday's win was a welcome respite for the Bulls after a tumultuous couple of weeks that featured a coaching change, the worst loss in franchise history, a near mutiny, injuries, and benchings.

Boylen spent two seasons as an assistant on Popovich's staff and won a title with the Spurs in 2014. Popovich didn't know Boylen when he first hired him but "liked his toughness, his sense of humor."

"His knowledge of the game was readily apparent," Popovich said. "So we were happy to be able to add him to the staff."

Popovich seems to have a good idea of what Boylen might be trying to build in Chicago, and he gave the Bulls coach words of encouragement after Saturday's game that Boylen declined to share.

"We have spoken, but I don't counsel him," Popovich said. "He doesn't need my counsel. He's been coaching a long time, and he knows what it takes to win, and he knows how to put a program together. It's always tough to take over a program without a training camp and do everything you want to do. But he's a pretty straightforward, honest individual. And he'll do it the way he thinks is best for that group. He'll be fair, he'll be demanding and he'll try to make everything clear so that whatever system he wants to employ will get across.

"I've learned as much from him as he's learned from us here. So my counsel is not necessary."

Back in December 1996, Popovich found himself in a situation similar to that of Boylen as he took over a 3-15 Spurs squad.

"The main thing is to establish what you want to carry over for the following year," Popovich said. "Obviously, you can't do everything [because] everybody is not there. But you do what you can to establish standards and the basics of what you think the building blocks will be for offense and defense for that group. And then you go with it. You go win, and you go lose."

As for San Antonio, the defeat at the hands of Chicago marred whatever progress it appeared to be making during its longest winning streak (four games) of the season. Defense was the team's main issue earlier in the season, as the Spurs dealt with the losses of three All-NBA defenders (Kawhi Leonard, Danny Green and Dejounte Murray) and two solid defensive contributors in Kyle Anderson and the now-retired Manu Ginobili. They've displayed improvement in that area.

But this time, a stagnant offense stalled the Spurs.

"A combination -- turning the ball over, they were aggressive, we couldn't score the ball -- it was a combination of a little bit of everything," DeRozan said.

Including the playoffs, Popovich's coaching record against his former assistants is now 36-15.

"I don't care who you are, it's hard playing your friends," Boylen said.

Dunn carries Bulls to second straight victory
Kris Dunn scores 24 points on 11-of-19 shooting, including the dagger as the Bulls rally to defeat the Spurs 98-93.

Aldridge's 21 in first half has Spurs up big
LaMarcus Aldridge drops 21 points in the first half as the Spurs continue to roll versus the Bulls.