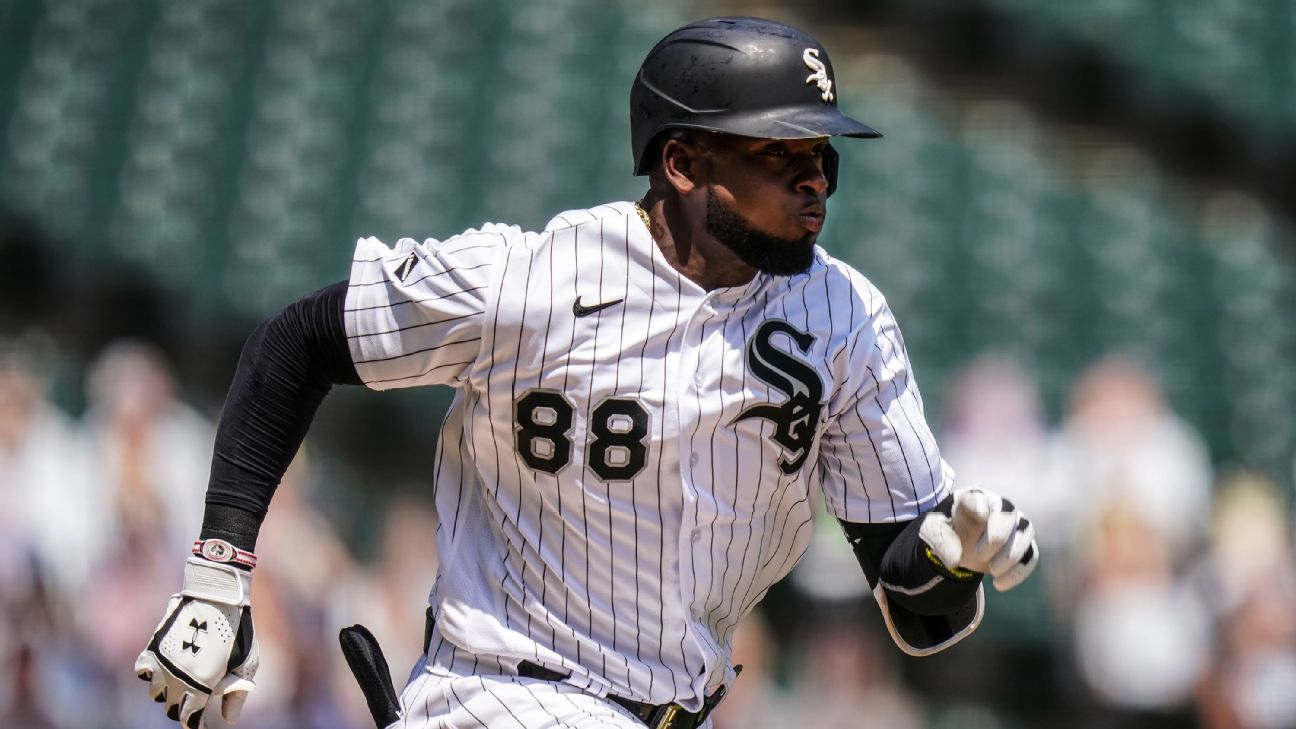 RICK RENTERIA WASin the Dominican Republic in the winter of 2017, shortly after his first season as manager of the Chicago White Sox. He held a stopwatch in his hand and clicked it as soon as Luis Robert's swing produced a routine grounder to the left side. When Robert's foot touched first base, the digital clock read 3.6 seconds, an improbable time for someone sprinting out of the right-side batter's box.Renteria began to doubt what he had seen. Then he watched Robert in the outfield, running down a surefire double in the gap, and felt validated.

Daryl Boston, who coaches White Sox outfielders, experienced something similar in spring training last year. It was March 11, and Robert was patrolling center field in Maryvale, Arizona. A hard, sinking line drive was sent up the middle. Boston was certain it would fall in. Then he glanced over at Robert. "It was like he shot out of a cannon," Boston said. The explosion to quickly make up ground, the anticipation to instantly discern trajectory, the glove work to secure a sliding catch -- all the traits that define elite center fielders were evident on one play.


But the legend of Luis Robert centers mostly on home runs. He secured a $26 million signing bonus as a Cuban free agent in May 2017 and accepted a six-year, $50 million extension in January 2020. In between, Robert, 22, played in only 200 minor league games and produced only one full season of stateside baseball. Somehow, it was enough to create an entire career's worth of unforgettable dingers, many of which came during a 47-game stint in Triple-A last summer.

The most celebrated occurred on the night of Aug. 19 in Durham, North Carolina. Robert's blast cleared the left-field fence, which stands 32 feet high and is 305 feet from home plate. It zipped past the concourse area behind the fence, sailed over the 20-foot-high snorting bull that promises free steaks and disappeared into the night.

Danny Mendick, a 26-year-old middle infielder, can think of a better one. It was the ball Robert hit over the batter's eye in Charlotte. The center-field fence at BB&T Ballpark stands 400 feet from home plate. The batter's eye is stationed roughly 10 feet behind it. Mendick guessed Robert's homer traveled more than 460 feet.

"We were all looking around in the dugout like, 'What just happened?'" Mendick said. "They talk about the bull, and yeah, he hit the crap out of that one, but the one he hit to center was just completely on a different level."

But there was another one, in Buffalo, New York, where baseballs barely carry. Matt Skole, a 30-year-old first baseman, saw Robert reach for a slider down and away and pull it over the left-field fence with one hand.

"He was leading off the game for us," Skole said. "I think the first pitch was a ball, and then he swung at a ball in the dirt, and the guy tried to throw it again, and [Robert] literally scooped it off the dirt and hit it off the net in left field."

Robert hit a similar homer in Birmingham, Alabama, except this one traveled over the tall scoreboard that towers over the left-field fence and navigated toward the museum that resides behind it. Blake Rutherford, a 23-year-old outfielder, swears the ball traveled 450 feet -- on a pitch low and away.

"It was pretty impressive, regardless," Rutherford said, "but especially when you consider the pitch he hit."


A NAGGING THUMB injury limited Robert to 50 games in what would have been his first full season in the White Sox system in 2018. He maintained an air of mystery when the following year began, then batted .328/.376/.624 across three levels, amassing 32 home runs and 36 stolen bases in 122 games, leaving little doubt about his trajectory.

The teammates who raved about his prodigious homers were more impressed with the adjustments he made along the way.

Triple-A has a unique way of humbling the brightest prospects. Many of the ballparks lend themselves to home runs, but many of the men who pitch in them possess the savvy to expose the weaknesses of young hitters. After Robert went on a hot streak to begin his stint in the International League last July, pitchers began to work to him differently. He saw right-on-right changeups, he saw breaking balls in hitters' counts, and he saw pitches that ventured outside the strike zone to begin at-bats, all of which exploited the free-swinging tendencies that had already become obvious.

For a week or two, Robert looked baffled. Many of his teammates were worried that it might mark the beginning of a downward spiral. Then suddenly it clicked again. Robert started spitting on breaking balls off the plate, started turning on those changeups that tailed in on him, started showing just enough patience to bait opposing pitchers back near the middle of the plate.

"They eventually couldn't figure out what to throw him," said 28-year-old outfielder Daniel Palka, who spent many nights watching Robert from the on-deck circle. "It's just funny. It's comical to be his teammate -- to see the other team in awe, or how frustrated they get. I thought the adjustments were the thing that put him above everybody."

Robert began the 2020 season as ESPN's No. 5 prospect, behind only Wander Franco, Gavin Lux, Adley Rutschman and Jesus Luzardo. Before playing in his first major league game, Robert was tabbed as an integral member of a young, up-and-coming White Sox team determined to take over the American League Central after the offseason additions of Yasmani Grandal and Dallas Keuchel.

Then came the coronavirus pandemic, a suspension of Major League Baseball and the buildup to a shortened, strange, unprecedented season that somehow enhanced Robert's mystique. Through the first six games, Robert possesses a 46% swing-and-miss rate and a 47% chase rate, both of which stand among the bottom 5% of his sport. But he also has two batted balls of at least 110 mph and three different runs at a rate of 30 feet per second, both of which place him among the game's elite. Only 10% of the season has been played, but it has already provided a fitting snapshot of the polarities that make Robert so tantalizing.

The most telling moment might have occurred during an intrasquad scrimmage in an empty Guaranteed Rate Field on the afternoon of July 11. Robert faced White Sox left-hander Carlos Rodon and was sitting on an off-speed pitch on the outside corner. Instead, he got a fastball inside and had to react quickly. The improvisation caused him to slip on his backswing and tumble to the ground. He rolled over and lifted himself up in time to watch the baseball sail over the center-field fence.


"I saw him sitting on the ground and I was like, 'Run, run, run!'" White Sox bench coach Joe McEwing later told the media on a video conference. "And then I realized the ball was 15 rows deep."

KEN WILLIAMS, the White Sox executive vice president, saw Robert only twice before signing him. At first glance, general manager Rick Hahn turned to Williams and asked, "Is that the Under Armour mannequin walking toward us?" Williams laughed. Later, as Robert navigated through his first and only official workout with the White Sox in the Dominican Republic, Williams saw exceptional hands moving through the strike zone and what he identified as "under-control power." He noticed that Robert could drive pitches thrown in any quadrant of the strike zone, which reminded him of White Sox slugger Jose Abreu. The other traits -- the speed, the athleticism, the strength -- were as obvious to Williams as they were to everybody else.

Williams later snuck into another team's workout and saw Robert handle breaking balls a lot better. With that, he had seen enough. The next step was convincing ownership to commit $52 million to a relatively unknown teenager ($26 million for Robert's contract and another $26 million as a penalty for exceeding the international bonus pool).

"Those are the kind of decisions that will keep you up at night," Williams said, "and did keep me up at night."

Robert is one of four key White Sox position players who have been signed to extensions before reaching arbitration, along with shortstop Tim Anderson, left fielder Eloy Jimenez and third baseman Yoan Moncada. The contracts carry the inherent risk of guaranteed money to relatively unproven commodities, but because all four deals could buy out a couple of free-agent years, Williams sees them as his best chance of extending a contention window that begins immediately.

In Robert, who stands 6-foot-3 with a chiseled, 185-pound frame, Williams sees a young Eric Davis. Williams bounced around as an outfielder with the White Sox, Tigers, Blue Jays and Expos from 1986 to 1991, which coincided with the early part of Davis' career. Williams is now in his 20th season as chief decision-maker for White Sox baseball operations. During that time, he has learned to trust his instincts as an evaluator and live with the results of an unpredictable business.

He was asked when he stopped losing sleep over his decision to sign Robert.

"That's an interesting question," Williams said while sitting in a golf cart at the team's spring training complex in February. "And I say interesting because you don't want to sound arrogant, but you don't propose doing such a thing in the first place unless you have a certain amount of confidence in your decision.

"But you have to have enough awareness about how the game can play out, how injuries can factor in, how culturalization factors in. It gives you a certain amount of humbleness in understanding that as confident as you can be in something, it still may not work out in your favor. That's sports. And it can cost you your job. And he hasn't produced yet. It still could cost me my job. I'll let you know when I stop worrying about it." 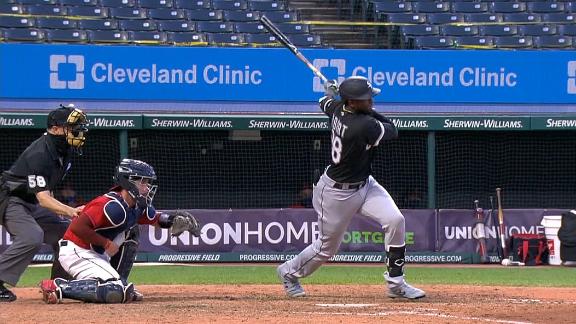