Wrigley Field welcomes back fans for first time in 2 years

CHICAGO (WLS) -- Baseball returned to Wrigley Field Thursday as the Chicago Cubs took on the Pittsburgh Pirates and unlike last year, fans are back in the stadium to cheer on the home team.

The COVID-19 pandemic changes the fan experience dramatically. The park is three quarters empty and fans have to enter the park at assigned gates with touchless tickets. The concession stands in the bleachers are closed.

"When we fly the W, I think you'll here people singing through their masks and obviously the seventh-inning stretch and the national anthem, so all the usual rituals of Wrigley Field will still be here, just a little bit smaller crowd," said Crane Kenney, Cubs president.

The ballpark is spiffed up and ready for fans to come back, but it will be a much different opening day for everyone.

"So this has been really great. This has been the longest time away from the Cubs, and it's so great to be back," said Danielle Diamond, Cubs fan.

City officials said even though capacity in the park is limited and people are socially distanced, opening day is the largest gathering of people in one location since the pandemic began.

"I'm fully vaccinated and I've been going to a hospital all year, so this is nothing," said Kathy Penzel, Cubs fan.

While capacity is limited for the game, neighborhood bars and rooftops, people are not complaining.

"Opening day is opening day no matter where you are, where you're at," said Maria Aristarchus, Cubs fan.

"You know it's cold in Chicago, but with the Sun shining, it's just absolutely beautiful, you know. Can't beat a day out at the ball park," said Matt Beaver, Cubs fan.

With around 10,000 fans are back in Wrigley Field for opening day, local businesses hope the returning atmosphere will also help them.

Even with limited capacity at ball games, business owners look forward to fans being back in Wrigleyville.

"This is how I feed my family. I've been doing this for the last 33 years," said Marcus Lyons, peanut vendor. "For me not to be able to work a whole year definitely put a dent in me."

While the ballpark is limited to 25% capacity, Lyons hopes to be able to fully pay bills and save money as well.

"I probably won't see that large amount of a crowd, but it just feels good to be in the atmosphere," Lyon said.

Some businesses that stayed open during the past year suffered without constant flow of fans. Sluggers said business was down 80% since bulk of the business comes during baseball season.

"There should be 40,000 people roaming the streets instead of the 10,000, so everything's starting slow, but it's better than last year," said Zach Strauss, Sluggers owner.

Strauss hopes even the limited number of fans will generate enough energy to draw even more to the area.

"By having people in the stands, it just makes the neighborhood pop," Strauss said.

"The excitement of just being together. All that togetherness is what we're looking forward to," said Tim Layer, Cubs fan.

"Get a bite to eat and just watch people going back and forth and coming and having the same enthusiasm that we do," said Barb Layer, Cubs fan.

Businesses around Wrigley Field hope to benefit from fans returning to the ball park.

Sean McNeill, owner of Sports World Chicago, was also happy to see more visitors back in his store.

"Love to see our fans. We haven't seen some of our customers in a year, so it's great to see it and a lot of enthusiasm this morning. We're happy, we're excited," McNeill said.

"There'll be people that just want to be in the neighborhood to feel the electric, to feel like it's normal again," Strauss said.

Baseball is back on the North Side with fans being allowed in Wrigley for the first time in two years.

The Cubs are ready to begin a new year, hoping players like Kris Bryant can return to his MVP form.

The White Sox will start their season in Anaheim against the Los Angeles Angels, with the game starting at 9:05 p.m.

Along with limited capacity and contactless tickets, masks are required, seating areas will be blocked off for social distancing, and partitions will now separate the once bare-boned bleacher seats.

What can Cubs fans expect this year?

Julian Green with the Cubs talks about what fans can expect this year.

It's been a year of shutdowns, lockdowns, tests, shots, and positivity rates, but Thursday fans can start talking about strikeouts, home runs and stolen bases.

"It's been two years, pandemic you know the fans are real excited to come out," said Cubs fan Shawn Greene. "I'm sure this place will be crowded but it's just good to be back."

And while it's not a full house at Wrigley, any fans in the stands is a different kind of shot in the arm for not only the Cubs and the business owners around the ballpark, it's a small taste of normalcy.

Roberto Ramos AKA Captain Cubbo is dressed and ready to put his superpowers to work.

"My ability is trying to get as many homers and hits and get as many Ws as we can possibly get and of course you know I'm here for the kids," Ramos said.

Carol Reyes is a super fan who is among the Advocate healthcare frontline workers filling the bleachers.

Advocate healthcare workers were welcomed back to Wrigley Field for Opeing Day.

"The Cubs have just been awesome. It's just been incredible," Reyes said.

Ashley Enk is a nurse that works in the COVID-19 ICU at Good Shepard Hospital.

"It was changing minute by minute every single day. It was very scary to begin with. No one knew what was going on or what to expect, and we had a lot of patients that were very scared," Enk said.

It was one of the most physically and mentally exhausting battles Enk had to face.

"The one most challenging was one who we took care of for over 52 days and then came back several times, and unfortunately, didn't really make it after that because of the long-lasting effects," Enk said. "But it's uplifting to know that we had such an impact as well on his family too."

Cubs gearing up for home opener

Daily Herald sports writer Joe Aguilar talks about the latest Cubs news as the team gets ready to open the 2021 season.

During a year of shutdowns, cancelations and restrictions, Enk sees the light at the end of the tunnel.

"Huge Cubs fan," Enk said. "I remember coming to the games with parents and my dad when we were little, so this is just great to be back here."

Hundreds of other vaccinated health care workers filled the bleachers at Wrigley Field for Opening Day.

"We are celebrating Opening Day but also celebrating being able to be back out in the public again," Enk said.

Thursday was the first home game with fans in more than 500 days, which comes as Advocate Aurora Health rolls out a mass vaccination site next to Wrigley Field.

While Wrigley Field itself will not be utilized, shots will be given in one of the adjacent buildings at Gallagher Way.

More vaccines are needed to combat the rise in cases including a nearly 50% spike in just the past week among adults between the ages of 18 and 39.

"We're not seeing them as sick as they were in the beginning, but they are still coming in," Enk said.

Fans can also use QR codes in front of their seats to order food for a contactless experience.

"So we're doing everything that we can to make sure that fans have a safe, but enjoyable experience at Wrigley Field,' said Julian Green, Cubs senior vice president of communication.

Wrigleyville is ready for an influx of die-hards. However, bars and restaurants will still have limited capacity.

SEE ALSO | Cubs Opening Day 2021: Bar capacity to be enforced in Wrigleyville as COVID cases rise on North Side

Opening Day is a sign of Spring that comes with new hope both on the field and off of returning to some kind of normal.

"I think you'll hear people singing through their masks and obviously the seventh inning stretch in the national anthem so all the, all the usual rituals of Wrigley Field will still be here, just a little bit smaller,' said Crane Kenney, Cubs president of business operations.

It took the Cubs about 10 months to come up with this plan to bring fans back safely and workers too.

The CTA is also getting ready, adding train cars but limiting capacity to 30 people per car, and no more than 20 people on standard buses.

Plans are being made to keep bars around Wrigley Field in compliance with COVID-19 restrictions for Opening Day at Wrigley Field on Thursday.

Officials will be checking on capacity and working to keep large crowds of people from gathering and drinking during the game, and into the weekend.

Some new murals around Wrigley Field are honoring women.

Last year, the Cubs employed some local artists to design murals in and around Wrigley Field, but when the pandemic hit, those artists walked away from their work for months.

Kate Lynn Lewis returned to complete her murals that celebrate Women's History Month and the history of women in baseball.

She did her designs and some T-shirts to help raise money for the non-profit Girls In The Game, so she and the Cubs wanted to make sure that the designs highlight the beauty of women in and around the beautiful game.

"The Cubs have done a really good job of incorporating into each of these a non-profit leg of it as well," Lewis said. "I definitely applaud the team for making space for art in Wrigley Field."

Her designs and T-shirts have sold out and her mural is on display in the Cubs team store.
Report a correction or typo
Related topics:
sportschicagowrigleyvillemlbbarcoronavirus chicagowrigley fieldsportschicago cubscovid 19
Copyright © 2021 WLS-TV. All Rights Reserved.
CHICAGO CUBS
Cleveland hosts Chicago, aims to build on Civale's strong showing 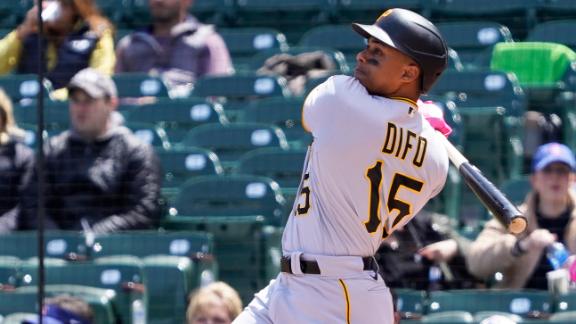