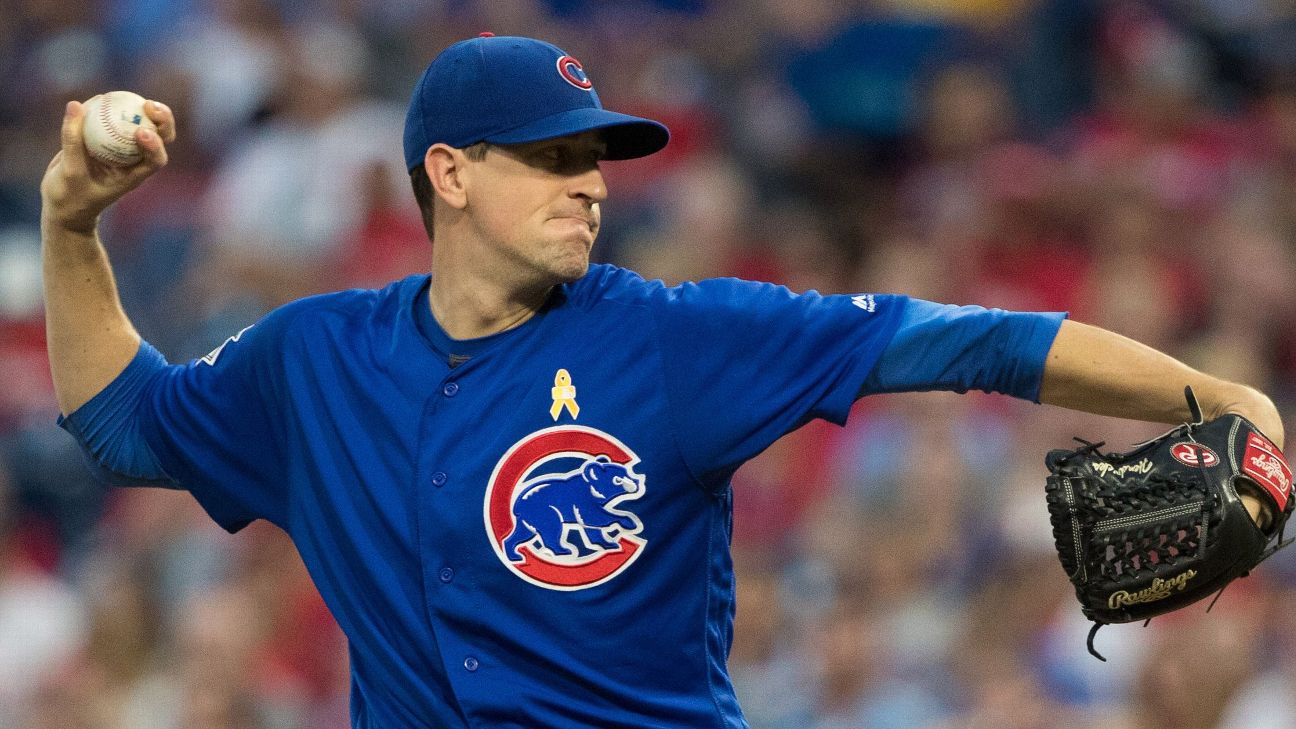 PHILADELPHIA -- It has to be every other National League contender's worst nightmare: The starting rotation of the Chicago Cubs is finally finding its groove at exactly the right time in the season. The calendar might say September, but the starters are beginning to pitch as if it's October.

"This is as locked-in as I've felt," Saturday's winner, Kyle Hendricks, said after the Cubs' 7-1 win over the Philadelphia Phillies.

The same goes for Cole Hamels, who's up for Pitcher of the Month for August, while Jon Lester is also rounding back into form after a post All-Star-break dip. Think about those names if the Cubs do indeed make it to October: Lester, Hamels, Hendricks. They are talented and playoff-tested. What other NL contender, aside from the Los Angeles Dodgers, can say the same about three of its starting pitchers?

"With Jon and Cole, that's where it starts," Hendricks said. "They're never bothered too much. It trickles down to the rest of us young guys."

That's funny, coming from Hendricks, who beat Clayton Kershaw to send the Cubs to the 2016 World Series. He has pitched in big game after big game, but he knows his teammates are in a different class. When you talk about competing, it's hard to find two who are better. Everyone on the Cubs knows that, as the turnaround began when Hamels arrived.

"It's been nice to watch him," third baseman Kris Bryant said. "There's so many guys that can start. It's nice to see those guys out there making it easy on the offense."

It's also nice to see Bryant on the field at all. He has been missing, because of an ailing shoulder, since July 23 but returned in good form on Saturday, going 2-for-4. He can only help, but none of it will matter if the Cubs' rotation doesn't continue to dominate. It has compiled a 2.58 ERA since mid-August.

"The starting rotation is doing a good job," fourth starter Jose Quintanasaid. "We just have to keep it rolling."

It wasn't always the case this season. In fact, the starting staff was the weak link in the first half of the year -- and the All-Star break really didn't change anything. But sometime in August, things did begin to get better, especially for Hendricks, who couldn't get out the first inning without giving up runs. Not so on Saturday, when he used 13 pitches to get back in the dugout without suffering any damage. And when the Phillies did threaten, Hendricks calmly got out of several jams.

"When they started getting something going, Kyle didn't change," Cubs manager Joe Maddon said. "The game did not speed up on him."

That's the beauty of having experience, something almost no other team in the NL can boast about in their rotation. The Phillies have Jake Arrieta, but that's their one playoff-tested starting pitcher. And Philadelphia would be out of the playoffs if they began right now. The Atlanta Braves? All newbies. Arizona has a few guys, like Zack Greinke, but their postseason run last year was short-lived and not very good. And those Dodgers? They're in a tight three-team race in the West.

And even if there's a guy here or there who has a few playoff games under his belt, none compare to Lester, who has won three titles, or Hamels, who has one. Or Hendricks, who also has one. Not even perennial contender St. Louis has that "it" factor on the mound. The Cardinals have turned over their rotation, handing it to guys like Miles Mikolas. He's good, but he's never been there.

Talent and experience. For starting pitchers in the NL, it keeps coming back to the Cubs -- and those top two guys.

"They have a presence," Hendricks said of Hamels and Lester. "Just confidence in what they do and it really helps out the rest of us feel that way."

If a changing of the guard is to happen in the NL, it will take someone who can outcompete those Cubs starters. Even when they get down to their No. 4 guys, like Quintana or Mike Montgomery, the Cubs can count on them for two turns through the lineup. Going to the bullpen that early is only possible if the horses ahead of them can handle the workload. The answer to that question is easy: Try taking the ball out of hands of Lester or Hamels in a playoff game. It's hard enough to do in April, let alone October.

"Those are the guys we count on," Maddon said.

Finally, the Cubs can do just that: rely on their rotation, while serving notice to the rest of the league. Who can beat their front three?