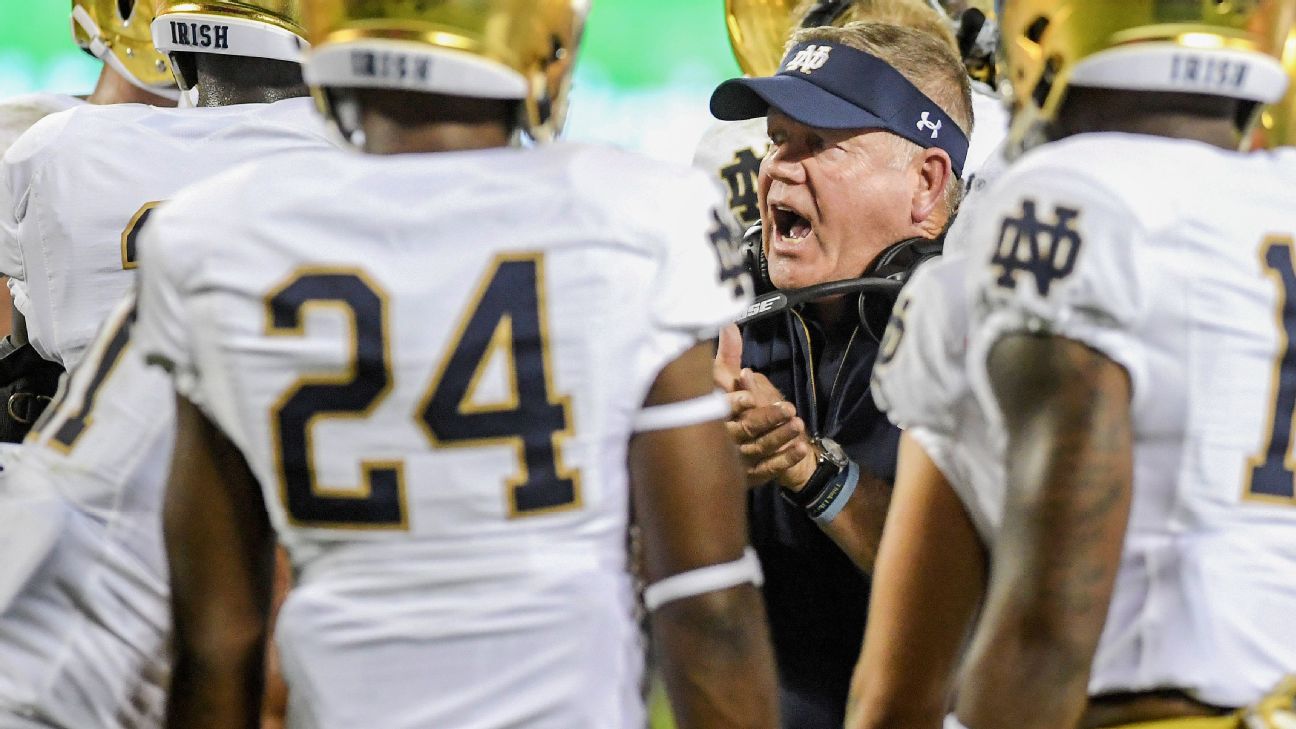 If Notre Dame can make this latest leap into the AP top five actually stick ... if it can reach 7-0 for the first time since 2012 ... make the College Football Playoff ... avenge its national title loss to Bama ... If the Irish can complete that and a whole lot of other stuff on the current edition of the "Notre Dame is back!" checklist, perhaps one day they will pause to dissect the journey that got them to this place and dig down to discover its Big Bang. The touchstone moment that sparked the Fighting Irish's 2018 climb back to national relevance.

When they gave the patrons of Notre Dame Stadium more comfortable seats, then immediately worked to convince those same fans not to sit down in those seats ... and then gave them a player exciting enough to make them stand and stay there.

"Listen to this! Look at this!" Quarterback Ian Book took in the bowl around him, clapped his hands, and took his place in line during pregame drills on the evening of Sept. 29. He was moments away from his third collegiate start during which he sliced and slid and passed his way through and over then-No. 7 Stanford. A half-hour before kickoff, with Bell Biv Devoe pumping bass through the stadium speakers, the student section jumping and graphics dancing across the 5,200-square foot video board, Book smiled and slapped the shoulder of a teammate. "If you can't get hyped for the energy in this place right now, I've got nothing for you!"

Book, a redshirt junior, isn't old enough to know exactly how big of a deal his observation is. The game-day experience at Notre Dame Stadium -- the House That Knute Rockne Built -- has long been known for history, tradition, the echoes, everything seemingly dipped in bronze and rolled out every Saturday for a college football museum exhibition. Former players not much older than Book tell stories of their own pregame workouts, looking into the old redwood grandstands and seeing the team's more seasoned supporters catching catnaps before kickoff.

So, no, "hyped" wasn't a description used much back in the day. But these days, the kid who called it that is one of the biggest reasons that term suddenly fits South Bend as comfortably as a gold-painted helmet.

The meteoric rise of Book has been material worthy of, well, a book. He came to campus three years ago from El Dorado Hills, California, as the fourth-string quarterback. Even after taking the reins from Brandon Wimbush three games ago he was still listed on the Stanford game depth chart as an "or" under Wimbush's name. But in his three games as starter the Irish offense has posted an average of 46.3 points. He has thrown for nearly 900 yards, with nine TD passes vs. one interception, a 73 percent completion rate and has added 81 yards and three TDs with his feet.

He also has added a little something that Notre Dame's offense hasn't enjoyed in quite some time. Like, Brady Quinn's or Tony Rice's time. Book has added imagination.

"I'm just trying to bring some tempo," he declared after hanging 278 yards and four TDs on Stanford in a 38-17 win. "I want these guys to tally behind me, work faster as an offense and just bring some juice. I want to be a leader."

"He's definitely a leader," said senior Miles Boykin, Notre Dame's leading receiver. "He can make so much happen, but he's so calm. He's actually quiet in the huddle, no matter the situation, where we are or what the score is. He's just someone that you trust. You know he can do the job whatever that job is."

Recruiting teammates like Boykin to his cause hasn't been hard for Book. Winning will do that. So will getting as many of those teammates as possible involved in that new offensive push. A total of 10 players caught Book passes against both Wake Forest and Stanford, to go with six pass-catchers at Virginia Tech. Over those three games 10 players have run the ball and nine have scored touchdowns.

The kid's response to posting 45 points on the board at Lane Stadium on Saturday night? Without a hint of arrogance: "Every week we expect to run up the scoreboard. You never know what the score could have been, but we're happy with the win."

When asked about the QB he suddenly placed under center despite a 3-0 start behind Wimbush, the head coach gets downright metaphysical.

Kelly went on to talk about the willingness to opening one's mind to creativity and opening doors to new possibilities in life by trying out new angles in how they view the world. To be clear, he wasn't only speaking of his newfangled offense. He also was speaking of himself. This is a coach who has yo-yoed in and out of double-digit win years, had some of those wins stripped and had promising QBs falter on and off the field. At home, he has watched his wife Paqui battle cancer twice.

Still, it was less than two years ago, following a brutal 4-8 campaign, that Kelly finally forced himself to open the door of his football brain to let in new ideas. That included interviewing his players to ask what they believed needed to be done to fix Notre Dame football. They were brutally honest, telling Kelly that he'd fallen out of touch. They said he was either in full-on CEO ivory tower mode or he was so entrenched in the offensive side of practices and meetings that his defensive team felt neglected. In an effort to reinvigorate his approach, Kelly overhauled his staff, even when it meant saying goodbye to lieutenants and confidants who had been by his side for decades. Since those changes, the team is 16-3.

At the same time, Kelly and athletic director Jack Swarbrick went outside the building to former players and legends to rekindle support. They also chatted up those gray-headed folks who write the big checks and automatically renew their season tickets, but also catch those pregame naps. If Kelly was willing to change his ways, then he reasoned that, if they really loved their football team, some of those folks would need to be willing to change their ways too. Nothing massive. Little stuff, like standing up for big plays and tolerating a little hip-hop music from time to time. No, that's not how Knute Rockne did it when he opened this stadium in 1930, but if he'd been coaching in 2018 and thought playing Kendrick Lamar would've helped him stop Navy on third down, it's a safe bet he would've had the "Black Panther" soundtrack cued up.

"It has always been an interesting balance to walk here at Notre Dame," Kelly confessed over the summer. "To push this program forward into the future as part of the modern game of college football, while still taking advantage of and paying tribute to a history that is second to none. That's not just a challenge for the head coach, the same goes for the administration, the fan base and, ultimately, the players. A lot of people have spent a lot of time over the last few years working to find that balance. I think we're seeing the benefits of that work."

They've also spent a lot of money -- $400 million -- as part of the Campus Crossroads stadium renovation project that added the sound and video system, three buildings melded into the bowl, premium seating, a "future-proofed" television studio and spacious locker rooms and team facilities. Intermixed with the lounges, ballrooms and classrooms are a Smithsonian's worth of statues, plaques and artwork honoring the likes of Paul Hornung and George Gipp. Every corner of like-new Notre Dame Stadium feels like the perfect past/future compromise. All the way down to the postgame scores, shown on the new HD video board, but done so in the style of the old light-bulb scoreboard with the Longines analog clock that it replaced.

As part of the renovations, 8 miles of wooden grandstand benches, the ones installed by Rockne in 1930, were yanked out. Much of that redwood was recycled and reworked into the stadium elsewhere, while the remainder is being sold as souvenirs. The new seating is vinyl-wrapped and widened for more hip and legroom.

"We gave them more comfortable seats, but we've also specifically instructed our fans that it's OK to stand and cheer and not to complain when others do it," a Notre Dame Stadium usher explained at halftime of the Stanford game. "One older gentleman told me he got a new seat but now he never uses it. He always stands up to support the team. So he says when he gets home he sits on the old wooden seat he bought."

The usher was asked, so, what made him finally start standing up? She shouted back "Ian Book!"

Book's fantastic timing is not limited to downfield passes. He and his same-age teammates arrived onto campus right smack in the middle of this new-age Irish sea change. That energy he creates already has pushed the new South Bend game atmosphere over the top. Even this week, there were both internet rumors about his academic eligibility and columns daring to compare him to former Irish QB Joe Montana. But those around him say he remains unrattled.

Should Notre Dame keep marching through 2018 and earn the right to a rematch with Alabama on college football's biggest stage, perhaps Book could push his team over the top, too. Kelly knows he probably can't match the Tide's depth or strength. What he needs is an X factor. Now, finally, he might have that. From a former fourth-stringer who came in under the recruiting radar out of Sacramento.

Neither is the new Notre Dame. 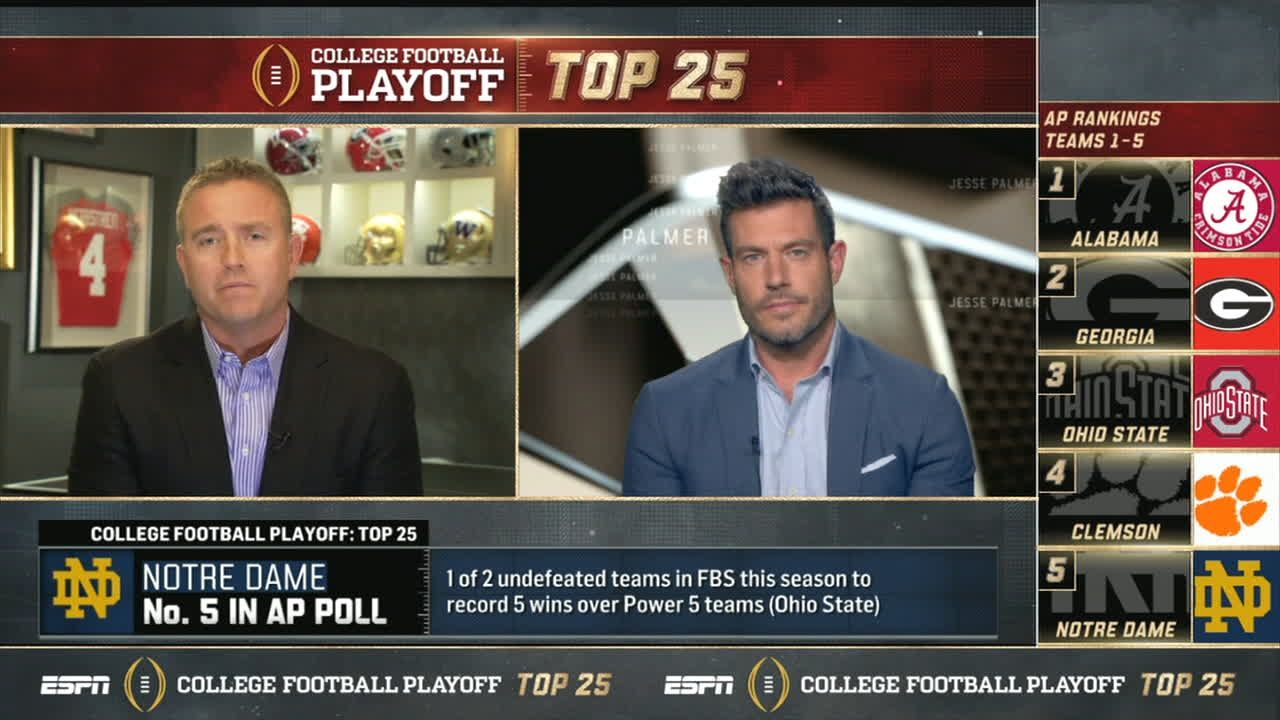