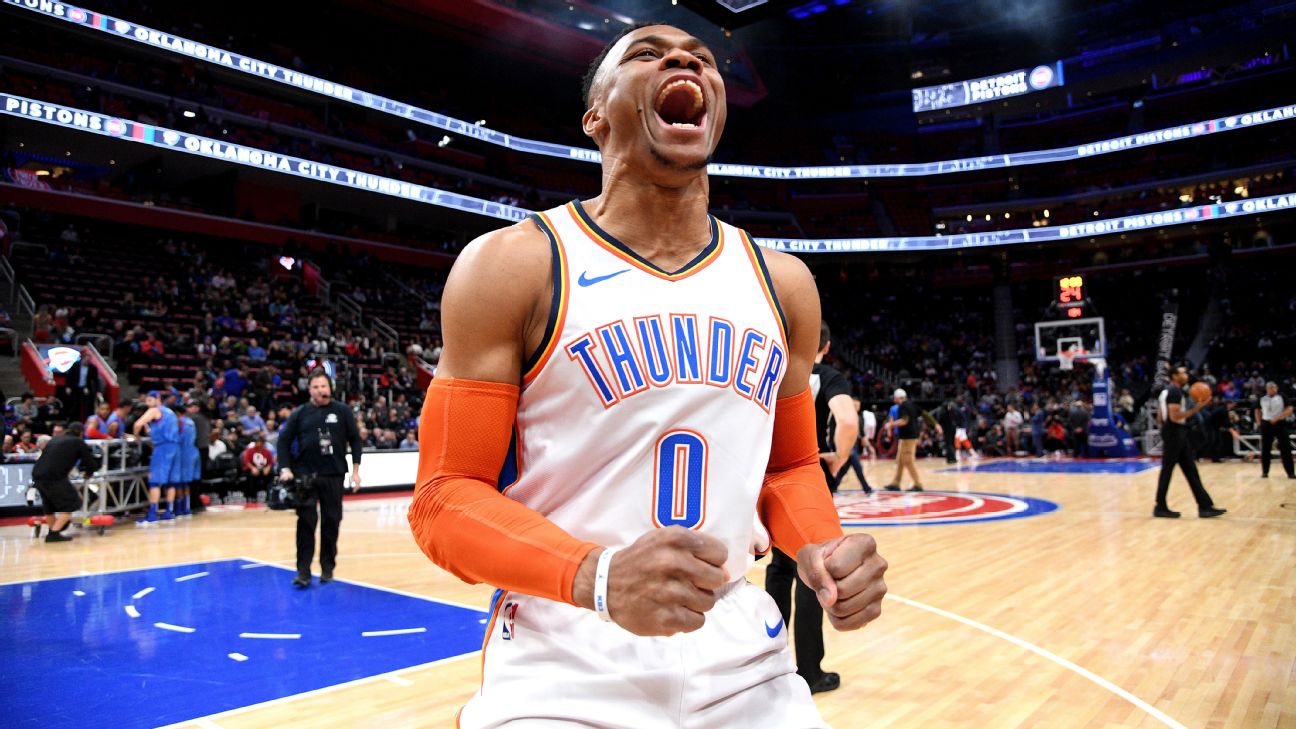 OKLAHOMA CITY -- An otherwise ho-hum blowout by the Oklahoma City Thunder over the Chicago Bullsbecame suddenly tense Monday night when a squabble spilled over into courtside fans as players and coaches tried to separate the teams.

It started in the third quarter of the Thunder's 121-96 win, when Russell Westbrook and Kris Dunntraded contact, and Dunn followed with a shove. Thunder forwardJerami Grantthen ran over and confronted Dunn, and Bulls big menRobin Lopezand Bobby Portisarrived to interject. Lopez then lightly head-butted Grant as they spilled into the first row of courtside seats, and Grant pulled Lopez down on top of some fans.

Bulls coach Jim Boylen ran across the court, grabbed Grant around the neck and pulled him away. Thunder assistant coach Dave Bliss stepped in front of Lopez and separated him from the scuffle as Lopez struggled to gain ground while pointing his finger and unleashing a scowl toward Grant and Steven Adams.

Said Grant, when asked if he had an issue with Boylen grabbing him: "Trying to protect his team. Yeah. Pretty much it ... it's a scuffle. Stuff is going to happen."

It was an unusual scene with the potential to escalate into a bad situation, as Lopez was highly agitated and aggressively going after Grant, all while standing right in front of the first row of fans.

"It felt like I got twisted and flipped a little by someone by that bench there," Lopez said. "I don't know. After that, something happened."

There were two technicals assessed to each side after the tussle -- to Westbrook, Grant, Dunn and Lopez.

"Man," Westbrook said when asked if he was surprised to receive a technical. "Next question."

Westbrook recorded his seventh triple-double of the season with 13 points, 16 rebounds and 11 assists but was not interested in discussing the incident.

"Next question," he said when asked about his reaction to Boylen's grabbing Grant.

Boylen, who recently took over for Fred Hoiberg and made headlines with his practice approach and objective to reset the Bulls' culture, said he liked to see his team not back down.

"That's all we've been talking about is fighting for each other, and we talk about being a pack of wolves, man," Boylen said. "I thought we had some of that. I liked the look in our guys' eyes when that happened. It bonded them a little bit. That's what we've been talking about. Those things are going to come up again, it happens in the league. I think we'll be ready for it next time to handle it even better."

Lopez eventually was ejected a few minutes later after being called for a foul and picking up his second technical for rolling the ball at Grant, who had been knocked down.

"He needed the ball to shoot the free throws," Lopez said. "I thought the refs had done enough, and I wanted to alleviate some of their work. They had an abnormally large workload for the first half of that quarter, and I wanted to help them out, ease their pain a little bit, ease their burden. And I guess not everyone saw it the same way."

Paul George led the Thunder with 24 points and electrified with a 16-point second quarter that featured 6-of-6 shooting as the Thunder built a 20-point halftime lead. After the scuffle, the game lost some flow and George lost some rhythm, missing all six of his shots in the second half.

"It got a little chippy," George said. "But we kept rolling."