Tom Rees, and his journey from Notre Dame QB to QB coach 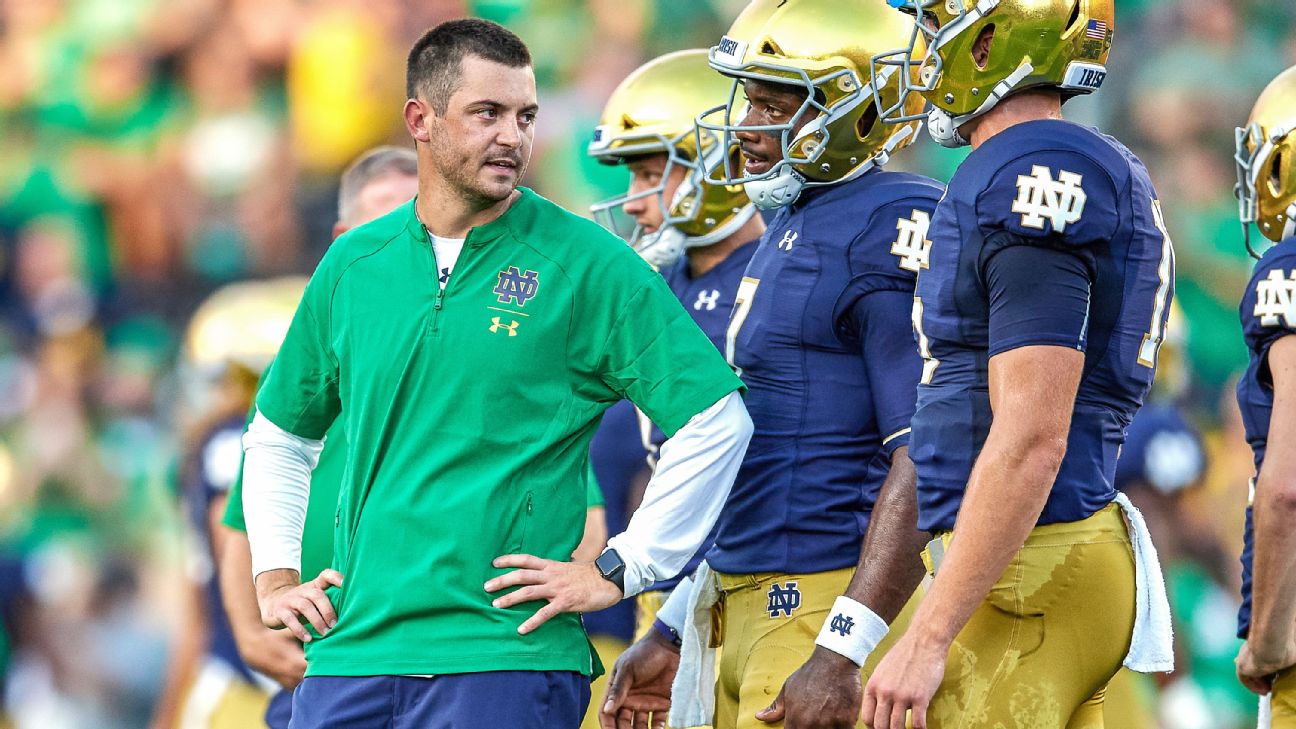 The 26-year-old Notre Dame quarterbacks coach is only five years and a couple of letters removed from his complicated, overachieving career as Fighting Irish quarterback. Tom Rees is happy to discuss how the Irish managed to execute college football's most impactful midseason quarterback swap this year. He'd rather not delve into his own quarterback shuffle, when Tommy Rees produced good results and a less-than-great reception.

Rees knew he would likely be asked to relive his college days when he accepted an offer to coach at his alma mater nearly two years ago. The parallels between this season's 12-0 run and the program's only other undefeated regular season this century -- the 2012 team co-piloted by Rees -- made it unavoidable. He did his best, nonetheless, to avoid it.

"I say I don't remember stuff," Rees said after spending the better part of a 30-minute media session earlier this month parrying questions about his past with coachspeak. "But I pretty much remember all of it."

Rees comes equipped with the searchable hard-drive version of a coach's mind. He has the kind of recall that makes for a good parlor trick and also convinces every boss he's had that he's headed toward a long and impressive career in coaching.

Remembering all of it means he can walk into a darkened meeting room and immediately recognize that the film making his quarterbacks giggle is from a long-ago 7-on-7 summer practice session from his playing days. He might even remember the incriminating half-hearted run fake that's about to show up on screen before shaking his head and telling them to do as he says, not as he did. It means he knows the exact time and situation of a tight-end seam route he hit successfully six years ago, and thus knows exactly where to find the tape to show a young quarterback who hasn't figured out just yet how that throw should look.

Remembering all of it also means the chorus of boos that greeted him the first time he took the field to bail the Irish out of a tight spot in 2012. He remembers the "Turnover Tommy" nickname, the critical newspaper columns and general derision. Limited athleticism made Rees an easy target whenever the team struggled during his time on the field, and sometimes even when it wasn't struggling. Those memories might have been just as valuable as all the others while helping his team navigate a potential tricky situation this season.

Rees jokes with his current quarterbacks about the blowback he got in his four years playing for the Irish. When the outside world started to sound off on the strengths and weaknesses of Book and senior Brandon Wimbush this offseason, Rees let both signal-callers know that their haters paled in comparison to his haters. He said he challenged both of them in August, telling them they didn't come to Notre Dame to be backup quarterbacks.

Wimbush started the first three games of this season before head coach Brian Kelly and offensive coordinator Chip Long decided they needed to make a change for the good of the rest of the team. Rees' job was to get Book ready for the limelight and to make sure Wimbush remained upbeat and engaged. (Wimbush will reportedly transfer after this season.)

Book threw for 325 yards and two scores in his debut start against Wake Forest. He's since become one of the most accurate passers in the FBS (70.4 percent completion rate) this season. Rees said Book has worked hard to develop the consistency and confidence that now define his style of play. Book credits Rees with teaching him everything he knows about scheme and coverages, and with making a potentially awkward transition run smoothly.

A rib injury sidelined Book for one week in early November, which gave Wimbush a chance to step back into his starting spot on senior night at Notre Dame Stadium. He didn't miss a beat, throwing three touchdowns passes and rushing for 68 yards in a blowout victory over Florida State. Rees, who knows well the challenges of being benched, said he can't think of a moment that made him happier than when he hugged Wimbush at the end of that game.

"It was emotional, knowing what he's gone through and maybe that's because of my own experiences," Rees said. "The kid is an incredible young man. For him to have that moment in the stadium on senior night, playing the way he did and leading the team to a victory in a really critical part of the season, meant a lot to a lot of people. It meant a lot to me. It really did."

Three of the four teams in this College Football Playoff juggled players or made wholesale changes at the sport's most important position on their path to the postseason. Alabama and Clemson, the Irish's opponent Saturday, were expected to land here no matter who was taking their snaps. Notre Dame didn't assert itself as a bona fide contender until making its switch, and even then it needed to remain flawless despite Book's injury to stay in the running. Rees proved to be a unique asset in avoiding a season of potential pitfalls.

"I think there's a great amount of trust [between Rees and his quarterbacks] as it relates to on the field with the position itself and the roller-coaster ride of being the quarterback at Notre Dame," Kelly said. "Tommy has taken that trip."

That experience, along with the extensive mental library built into Rees' mind, are the reasons why Kelly had long hoped to add Rees to his coaching staff. Mixed in with a whole bunch of well-documented exasperated hollering, Kelly started telling his young quarterback that he'd be a great coach one day when Rees was still a sophomore or junior battling for playing time. Minutes after Rees finished the last of his 30 collegiate starts to cap a career in which he wrung every drop of athletic potential out of his body, Kelly told a room full of reporters that the outgoing senior had an open invitation to take a job on the Notre Dame staff as a graduate assistant whenever he wanted it.

A few years and stops at Northwestern and with the San Diego Chargers passed before Kelly made good on his promise. Rees turned down an analyst's spot when Kelly first called. Then in January 2017, the head coach asked -- "I begged," Kelly said -- Rees to take over the quarterbacks room.

Rees took a few weeks to decide. Given the reception he received during his first go-round in South Bend, it would be easy to understand if the bright, young coach with options collected his diploma and bid the campus adieu. This is, after all, the home of the fan base that once started an online petition to ask the president of the United States to keep Rees off the field on Saturdays. (President Barack Obama declined to use his constitutional powers to bench a fellow Chicagoan.)

Rees says his return to South Bend is not an attempt at redemption or to stick it to his former detractors. There is no record of slights to settle hanging on his walls. "No Billy Madison list," he confirms. He returned because he thought it would be good for his career and because he genuinely wanted to give back to a place where he enjoyed spending four years.

"People want me to have more negative feelings than I actually do," Rees said. "I played a lot here. I built great relationships here. It's opened doors for me that I would never have seen somewhere else."

The beauty of a mind that remembers everything is it lets you decide where to focus. When asked why he doesn't harbor those negative feelings, Rees recalls an issue of the local newspaper printed a couple days after one of his less-inspiring performance in 2012. He imagines that there were critical columns and comments, but what sticks out in his memory is the letter to the editor submitted by a former professor defending him.

The professor turned out to be Chris Stevens, a former Notre Dame basketball player who went on to be a co-founder of the coffee-machine company Keurig before returning to South Bend to teach classes. Stevens is now the professor Rees and other Irish coaches call on to explain the academic side of coming to Notre Dame to prospects on recruiting visits.

"I was in his class like twice," Rees said. "There's no reason for him to do that, and he did it. It's something that meant a lot to me at the time and it continues to. That's what I think of when I think about my time at Notre Dame."

Stevens buys each of his students a gift when they take one of his courses. He gets them a copy of a book that implores them to look five years ahead to develop a plan for a better future. Five years after Rees finished his playing career in South Bend, he's back on campus. Like most of his former and current bosses, Rees too believes he's bound to be a better coach than a player.

Rees said he's proud of his playing career, even if some Irish fans are not. He believes that at some point, probably when he's older and has once again moved on from Notre Dame, the former-player tag will fade and fans might find a new way to remember him. 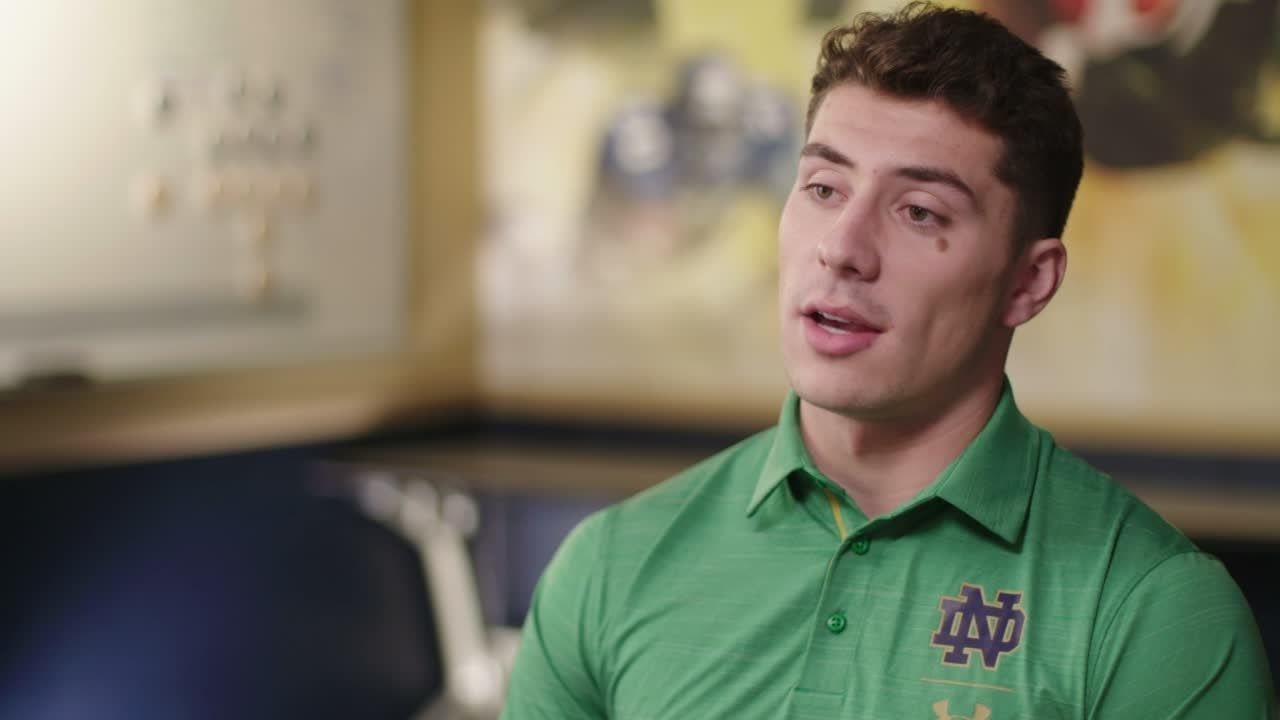