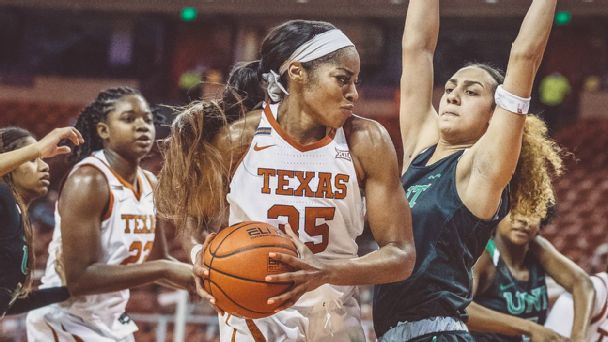 The New York Liberty will have the No. 1 pick for the second year in a row, but the 2021 WNBA draft has many more questions than answers right now. Will there be a full college basketball season to evaluate talent? Will any top seniors opt to come back for another season, as the NCAA is allowing athletes to do because of the impact of COVID-19? How many draft-eligible juniors will come out?

Will the Dallas Wings, the WNBA's youngest team last season (24.20 average age), use all three of their first-round picks like they did last April? Or will the Wings try to trade picks for a veteran or two? How will free agency -- which was more active last season than ever before -- affect the draft?


Nothing seems clear, including the No. 1 pick. Kentucky junior guard Rhyne Howard topped ESPN's list of the best women's college basketball players for 2020-21, and many think she might go first if she was eligible. She isn't agewise -- she won't turn 22 in 2021 -- and the only other way she'd be eligible is if she graduated early. A Kentucky spokesman said Friday that Howard is not planning to do that and expects to finish her college career in 2022.

We include two juniors in this mock draft who are eligible agewise with this caveat: Neither has said yet if she is considering leaving early. Three draft-eligible juniors were first-round picks in 2020 -- Oregon's Satou Sabally, Texas A&M's Chennedy Carter and UConn's Megan Walker -- which took away from this year's senior class.

Expect that this mock could -- and likely will -- change dramatically as we go through the season toward April's draft.

Just a junior, she is eligible because she turns 22 in September. The Collier train has picked up a lot of speed in recent weeks. She averaged 13.1 points and 10.5 rebounds per game as a sophomore, but at 6-foot-5 got stronger in the offseason and looks good thus far for new Longhorns coach Vic Schaefer. That includes a 44-point performance vs. North Texas and an average of 30.3 PPG and 12.0 RPG through three games. It will be interesting to see how she does against Texas A&M on Sunday (8:30 p.m. ET, ESPN). With so much uncertainty about No. 1, for right now Collier seems at least a decent guess. She could help a Liberty team that in finishing last in 2020 struggled with a lot of things compared to the league's better teams.

She was eligible for the draft last season but opted to return to Arizona and is one of the best players in the Pac-12 and the nation. At 5-foot-6, she's on the small side, but is incredibly quick, skilled and fearless. After spending her freshman season at Washington, she has averaged 22.5 PPG, 6.1 RPG and 4.2 assists per game in her two seasons with Arizona. She also has a former WNBA player as a mentor in Wildcats coach Adia Barnes. The Wings, as mentioned, might decide to deal this or other picks. And considering they already have Arike Ogunbowale, Dallas might not see McDonald as fitting a need. But she might be the best player available this early.

A promising 6-foot-4 post, Kuier doesn't turn 20 until next August, so we will have to see how WNBA-ready she might be for 2021. But her potential is such, offensively and defensively, that she could be a lottery pick. Especially with a draft that doesn't have an abundance of sure things. The Dream could use more depth in the post. If they don't get that in free agency, they might see a still-developing prospect with a high ceiling like Kuier as a worthwhile possibility.

A starter since her freshman season, the 6-foot-2 guard/forward has averaged 14.8 PPG, 7.8 RPG and 1.8 APG. You could make some comparison between Davis and former Lady Vol Shekinna Stricklen, a nine-year WNBA veteran who is also a versatile 6-2 player. Indiana general manager Tamika Catchings' Tennessee background might lead her in this direction, and Davis could fit a need, too.

After spending her freshman year at Texas Tech, Guirantes returned closer to her New York home and has blossomed for the Scarlet Knights. Last season, she averaged 20.6 PPG, 6.0 RPG and 3.1 APG, plus played a team-high 37.1 minutes per game. Her 36-point showcase in a February victory vs. Ohio State was one of the more exciting individual performances of last season. Perhaps the 2020 success of Rutgers alums Betnijah Laney and Kahleah Copper might also help Guirantes' profile.

She's one of the two juniors we are including because they are age-eligible, although they have not indicated they will leave early. Westbrook has good size at 6 feet and is very skilled. She started during her two seasons at Tennessee, averaging 14.9 PPG, 3.6 RPG and 5.3 APG as a sophomore in 2018-19. She sat out last season after transferring to UConn, and is expected play a lot this season for the Huskies. The Mercury might see her as a backcourt bridge to the future.

Her physical skills are abundant; she averaged 18.9 PPG and 8.9 RPG last season and 18.3 and 8.5 as a sophomore. Her ability to defend against multiple types of players should help, too. The issue, though, is that as an undersized forward -- she is listed at 6-0 -- she probably needs more guard skills for the next level. She can hit the 3-pointer -- she has made 41 in her career -- and it will help if she can improve there. The key for the team that takes her, though, might be to focus on what she does well and not what she doesn't.


Sure, she is small at 5-6, but look at the WNBA rookie of the year last season: Minnesota's 5-5 Crystal Dangerfield. Spouses Courtney Vandersloot and Allie Quigley have anchored the Sky's backcourt for a long time, but Evans could be a good addition for her scoring capability and her defense. She averaged 18.0 PPG and 4.2 APG last season.

After a strong junior college career, Mack has played just one season in Stillwater. So fans outside the Big 12 probably haven't seen much of her. But at 6-4, she averaged 17.6 PPG and 12.5 RPG last season, plus had 96 blocked shots and was named Big 12 newcomer of the year. She doesn't shoot the 3-pointer, but she does everything else pretty well.

In today's more "positionless" basketball, the 6-2 Jones might not be thought of as versatile enough; she also doesn't shoot the 3-ball. But she's a strong defender and a tireless worker on the boards, averaging double-digit rebounds (11.3, 11.7) the past two seasons. And with Chennedy Carter gone from the Aggies, we might see Jones' offensive numbers go up this season, too. That has been the case in the first three games, as she has averaged 19.3 PPG compared to 11.0 last season.

One of the best stories in college sports, Mangakahia is back after sitting out last season while facing breast cancer. Sure, she is just 5-6, but you can't deny her productivity; she has averaged 17.1 PPG and 9.1 APG in her two seasons with Syracuse. The Australian guard could end up being the oldest player in this draft -- she turns 25 in April -- but the positive of that is her maturity. If she is still available at this point, the Storm might see her as another point-guard-in-waiting behind Sue Bird.

Like everything else with this draft, it is very hard to guess what the Aces will do. They were the WNBA's worst 3-point shooting team last season with Kelsey Plum out with an Achilles tendon injury. Boley is a different kind of 3-point shooter at 6-2. After her freshman season at Notre Dame, she transferred to Oregon and shot 43% (108-of-251) in 2018-19 and 44.1% (78-of-177) last season from behind the arc. The combination of her size and perimeter shooting might be appealing to Las Vegas, if her defense is considered good enough. 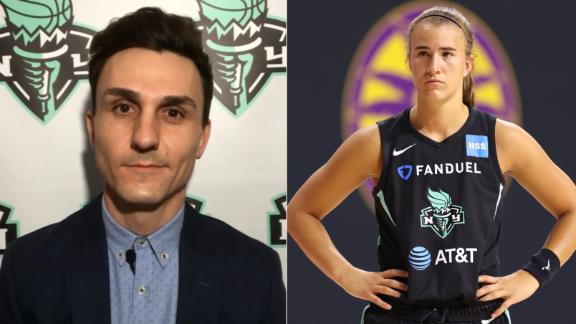