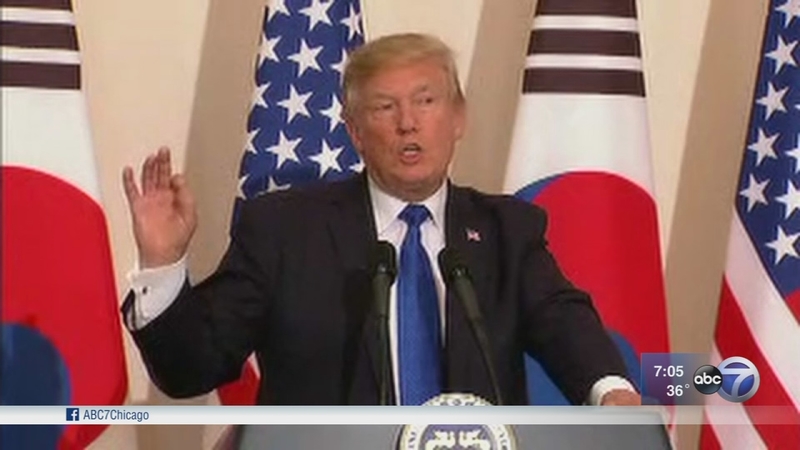 SEOUL -- During a news conference with the president of South Korea Tuesday morning, President Donald Trump talked about a hero who had a gun and shot the church gunman before the killer shot himself in the head.

The president was asked whether "extreme vetting" of gun owners would have made a difference.

Trump said "there would have been no difference three days ago" in the deadly Texas shooting if an extreme vetting policy for gun ownership had been in place.

"If you did what you're suggesting there would have been no difference three days ago, and you might not have had that very brave person who happened to have a gun in his truck and shoot him, and hit him and neutralize him," Trump said responding to a question during a joint news conference with South Korean President Moon Jae-in.

"Instead of having 26 dead he would've had hundreds more dead," Trump said.

Trump has called for "extreme vetting" of immigrants from Muslim-majority countries in response to terrorist incidents. But he has resisted any action on gun laws in response to the deadly mass shootings that have occurred during his time in office.

The president, once again, mentioned Chicago directly in relation to gun violence.

Question: Are you considering any kind of gun control policy going forward?

Trump: When you look at the city with the strongest gun laws in our nation, it's Chicago, and Chicago is a disaster. It's a total disaster. Just remember, if this man didn't have a gun or a rifle, you'd be talking about a much worse situation in the great state of Texas.

Chicago's violence has been a talking point for Trump for years, but what he claims is not true.

The only gun law the city of Chicago has is a gun dealer licensing ordinance, and there are no retail gun dealers inside the city. As for Illinois laws, there are many other states with tougher gun restrictions. These facts have not stopped Trump from repeating his rhetoric.

Along with California, New York, New Jersey, Connecticut and Colorado all have more restrictive gun laws than Illinois. Chicago gained the reputation as being tough on guns when it passed a ban on handguns in 1982, but that law became moot in 2010 when it was struck down by a federal court. The state then passed a law permitting concealed carry in 2013.

Despite Chicago's gun violence and the nation's mass shootings, getting gun laws passed in Illinois, a blue state, remains an uphill battle.

"There are a lot of measures out there, both on the congressional level and here in Illinois, but we need the political will to do that," said Colleen Daley, Illinois Council Against Handgun Violence.

While a gun dealer licensing bill may be brought up for a vote in Springfield, a ban on assault weapons is not likely to come up during the current session.

"We know there are plenty of scientific research that shows states with weaker gun laws have higher levels of homicides, suicides and firearms trafficking," Jones said.

Jones said universal background checks have stopped almost 3 million people who should not have guns from buying them. He said that number will go up if the gun show and private sales loophole is closed.

In large American cities, when adjusted for population, Chicago ranks eighth for the murder rate, with cities like St. Louis, Baltimore and Detroit ahead of the Windy City.

The University of Chicago Crime Lab recently released a report that said 60 percent of illegal guns in Chicago come from out of state.

Sunday's church massacre where 26 people were killed took place in Sutherland Springs, Texas. It marks the deadliest shooting in Texas history, with victims ranging in age from 17 months to 77 years old.

Trump said Monday that he believes the Texas church shooting was caused by a "mental health problem," not an issue with gun laws in the United States.

"Mental health is your problem here," Trump said, noting that "based on preliminary reports" the shooter was "a very deranged individual."

"This isn't a guns situation," Trump said. "This is a mental health problem at the highest level. It's a very, very sad event."

"A very, very sad event, but that's the way I view it," Trump said.