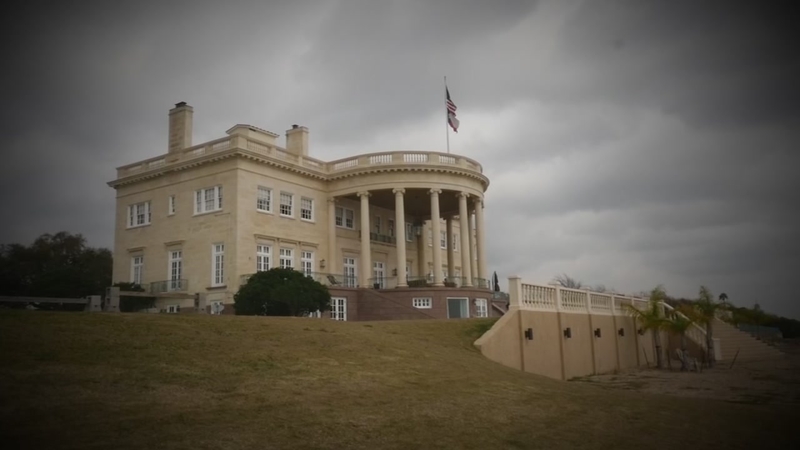 Take a historical tour of the Texas 'White House'

LA PORTE, Texas -- The president-elect isn't the only one who will be moving into a White House. One lucky bidder will soon be able to claim Texas' White House as their new home.

Built in the 1920s, the 20,000-plus square foot waterfront mansion sits right outside of Houston. Built for former Texas governor and Humble Oil founder Ross Sterling, the home is now up for auction -- and with no minimum bid.

Earlier this year, we got a sneak peek of the historic landmark, which sits in the bayfront community of Morgan's Point.

"Looks like you're looking down Pennsylvania Avenue and it looks like the White House," Listing agent Lin Neese told us.

That's what many say when they see the 22-foot columns, outlining the majestic rotunda portico that shapes back of the Sterling Mansion.

"Back in the '20s when this was built, they wound up spending over a million dollars, even back then, to build this home," Neese told us.

But in order to appreciate the historical landmark, we should take a step back in time to explore its roots.

Historian and owner of the Sloane Gallery Story Sloane III told us, "most of the films I have in my collection are from the Sterling family."

Sloane gave us a look back of what life was like when Governor Ross Sterling lived here.

"It's fantastic because you have guests arriving at this luxurious mansion of the day. Pulling up in the Fords and parking up front," Sloane said. "And you can only imagine the amount of powerful people, whether they're the state legislature, or even national, government or politics. Even oil barrens coming through those doors to have a good meal."

Sloane obtained these films from Sterling's grandson, and learned about the family history as well.

"I think it was ideally located to where Ross Sterling grew up. Kind of figures he'd want to be close to home when he built his main mansion after he made his fortune," Sloane told us.

Now as far as why it was built this way, there have been a few versions circulating.

Neese said, "My understanding is that Ross Sterling showed a Mr. Finn, who was a well-known architect, he showed him a $20 dollar and said I would like for you to build me a home that looks like this."

While some out there deny that story, it's certainly one of the more popular ones. As we take a look inside --

VIDEO: KTRK archive film of the Sterling mansion, when it was the "Boys Harbor" in the 60's
EMBED More News Videos

"You come into this grand room with very high ceilings, very decorative crown moldings, beautiful original hard woods, and then a very large grand dining room. A beautiful library, the mahogany in that room," Neese said.

It has nine bedrooms, 15 bathrooms, six fireplaces, and a double grand staircase. It's truly a one-of-a-kind home.