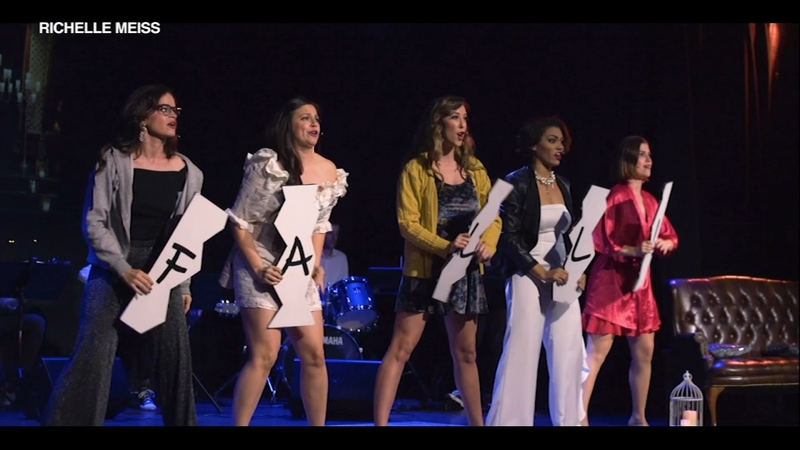 CHICAGO (WLS) -- It's time to put your best foot forward and earn the first impression rose when "Bachelor: The Unauthorized Parody Musical" premieres in the "most romantic city in the world."

With more drama than a group date, more surprises than a rose ceremony and more musical numbers than any season of the show, "Bachelor: The Unauthorized Parody Musical" is written by Richelle Meiss (bookwriter, lyricist) with music by Sam Johnides and Tony Gonzalez (composer, music supervisor, music director).

"Bachelor: The Unauthorized Parody Musical" is the most dramatic unauthorized musical parody of "The Bachelor" yet, its creators said. With songs like "Sob Story," "Two-On-One Tango" and "The Date Card is a Riddle," this uproarious parody is packed with romance, competition and contestants who may or may not be here for The Right Reasons, according to its creators.

Whether you love "The Bachelor," only watch "The Bachelor" with your girlfriend or have never seen "The Bachelor," get ready to fall in love with this musical. Who will get the final rose? Who will go home heartbroken? And how many "Bachelor" jokes can they cram into a 75-minute musical? You'll just have to come pick up your rose and find out!
The cast of "Bachelor: The Unauthorized Parody Musical" features Chelsie Cravens (Lauren M. and others), Ann Delaney (Lauren R. and others), Jake Elkins (Jesse Palmer), Cecilia Iole (Lauren P.), Nina Jayashankar (Jayshia and others), Alexandria Neyhart (Lauren T.) and Christopher Wayland (Bachelor). Understudies for the company are Alexandra Jaymes, Alanna Lovely, Jesi Mullins, Austin Nelson, Jr. and Dylan Obrochta.

RELATED: 'The Play That Goes Wrong' coming to Broadway Playhouse in Chicago

Richelle Meiss comments, "My favorite feedback from audience members is, 'I don't even watch 'The Bachelor' and I was laughing the whole time!' We have inside jokes that only true members of Bachelor Nation will get, and we have hilarious moments that anyone with a pulse will enjoy. The exceptional cast involved in the Chicago premiere of 'Bachelor: The Unauthorized Parody Musical' is amazing at both poking fun at the fame-seeking contestants and belting out the musical's original pop-rock songs. By the time we arrive at the dramatic final rose, you'll fall in love with these characters (or at least love to hate them)."

Tickets are on sale now and can be purchased at Ticketmaster.com, by calling (773) 935-6100 or by visiting the box office at Apollo Theater Chicago.

"Bachelor: The Unauthorized Parody Musical" is recommended for ages 13-plus.

SAM JOHNIDES & TONY GONZALEZ (he/him; composer, music supervisor, music director) are thrilled to join the Right Angle family with "Bachelor: The Unauthorized Parody Musical." Their most recent collaborations ran at Second City Hollywood, including "Trump in Space" and "Supportive White Parents." Their EP, "BRAVURA," and other singles can be streamed under the artist name "Diary of Atticus."

TIM DRUCKER (he/him; director) is thrilled to be right back at the Apollo with the Right Angle team after mounting "Love Actually? The Unauthorized Parody Musical" this holiday season. He previously developed the show in Los Angeles at Rockwell and Dynasty Typewriter. He currently directs the North American tour of "Friends the musical parody." This spring he directs the global tour of "Trixie and Katya: Live!" For more information, visit TimDrucker.com.

CHELSIE CRAVENS (she/her; Lauren M. and others) is a Utah native who moved to Chicago after completing the Actor Training Program conservatory at University of Utah and earning her BFA. After landing in Chicago, she completed the Second City Conservatory, and performed in various sketch, improv, and musical sketch groups around the city, before turning her sights back to regular ol' acting. She would like to thank her friends, family and her agents at Big Mouth Talent!
ANN DELANEY (she/her; Lauren R. and others) is happy to be back at the Apollo after playing Emma Thompson/Others in "Love Actually? The Unauthorized Musical Parody." Recent Theater credits: Phoebe D'Ysquith in "A Gentleman's Guide to Love and Murder" (Porchlight Musical Theatre), Penny Pingleton in "Hairspray" (Skylight Music Theater), Hannah in "Newsies" (Paramount Theater), Mary Lou in "Buddy: The Buddy Holly Story" (American Blues Theater), Rita in "White Christmas" (Theater at the Center). TV credits: "Chicago Fire" (NBC) and "The 4400" (CBS studios). Ann is represented by Gray Talent Group.

JAKE ELKINS (he/him, Jesse Palmer) is thrilled to be a part of "Bachelor: The Unauthorized Parody Musical" at the Apollo! Other Chicago credits include "Love Actually? The Unauthorized Musical Parody" (Right Angle Entertainment), "Grease" (Marriott Theatre), "Wizard of Oz," "Mary Stuart" (Chicago Shakespeare Theater), "Machinal" and "Birds of a Feather" (Greenhouse Theater). Jake would like to thank all his friends and family, most notably his Mom and Dad for helping him become the best person he can be. Jake studied Musical Theatre at North Central College and is represented by Gray Talent Group.

CECILIA IOLE (she/her, Lauren P.) is thrilled that all her years of watching "The Bachelor" are finally paying off! Some theater credits include: Rapunzel in "Into the Woods" (Writers Theatre), Johanna in "Sweeney Todd" (Paramount Theatre), Mabel in "Pirates of Penzance" (Utah Shakespeare Festival), Cunegonde in "Candide" (Clarence Brown Theatre), and most recently, Street Singer, etc. in "A Christmas Carol" (Denver Center for the Performing Arts). Cecilia serves on the board of Artemisia Theatre and is represented by Gray Talent Group.

NINA JAYASHANKAR (she/her; Jayshia and others) is an actor and a graduate of Northwestern University, where she earned her Bachelor of Arts in Theatre with the Music Theatre Certificate, as well as another major in Mathematics. She just spent this past holiday season performing in "A Christmas Carol" at Indiana Repertory Theatre. Nina has worked at a number of companies in Chicago, including The Goodman Theatre, TimeLine Theatre, Porchlight Music Theatre, CPA Theatricals, and Music Theatre Works. Favorite credits include Shakuntala (The Goodman Theatre), Sohni Mahiwal (The Blank Theater), Mr. Burns (Theater Wit) and Peter Pan (Music Theatre Works). She is represented by Gray Talent Group.

ALEXANDRIA NEYHART (she/her, Lauren T.) is beyond thrilled to be back on stage with "Bachelor: The Unauthorized Parody Musical." Alexandria graduated (virtually) from Chicago College of Performing Arts where she was seen in several productions including "Into The Woods," "Urinetown," "The Threepenny Opera" and "Stage Door." Catch her TV debut in "61st Street" on AMC and "Power Book IV: Force" on Starz this spring. Alexandria would like to give a rose to her supportive family, friends, and agents at Gray Talent Group.

CHRISTOPHER WAYLAND (he/him; Bachelor) is thrilled to work again with Right Angle Entertainment. He was last seen as Liam Neeson & Others in "Love Actually? The Unauthorized Musical Parody." In Chicago, he has worked with eleven theater companies and in six different states, regionally. His TV credits include "The Chi" (Showtime), "neXt" (Fox), "Chicago Med" (NBC), and "APB" (Fox). Christopher received an MFA in Acting from The Theatre School at DePaul University.

AUSTIN NELSON, JR. (he/him; understudy) is so excited to be joining The Bachelor nation! Previous Regional credits include: "Sister Act" (Mercury Theater Chicago); "My Way: A Musical Tribute to Frank Sinatra," "Buddy: The Buddy Holly Story," "A Funny Thing Happened On the Way to the Forum" (Metropolis Performing Arts Centre); "Elf the Musical," "Snowy Day and Other Stories" (First Stage Theatre); "Seussical the Musical" (Marriott Theatre); "Joseph and the Amazing Technicolor Dreamcoat" (Brightside Theatre). Much love to his family and friends for their undying support. Welcome back to live theatre, everyone!