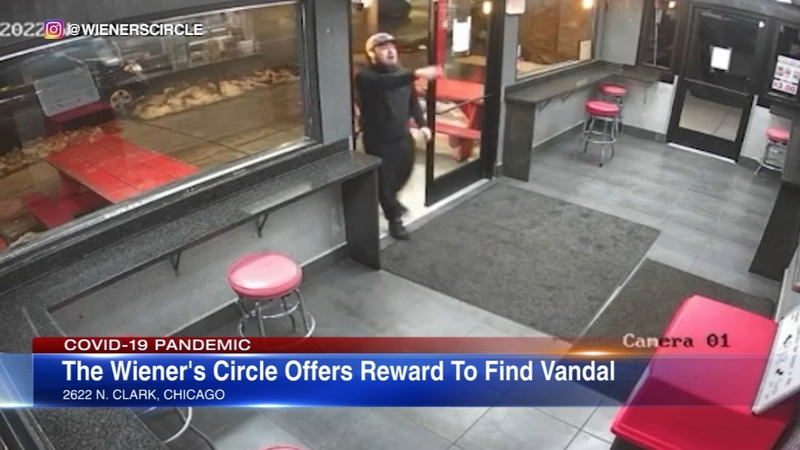 CHICAGO (WLS) -- The Wiener's Circle is offering a reward to find the man who was caught on surveillance video vandalizing the popular Lincoln Park hot dog shop on Wednesday night over a mask dispute.

The incident happened at the store in the 2600-block of North Clark Street at 8:40 p.m., Chicago police said.

The man entered the restaurant and refused to put on a face mask, according to police.

Surveillance video shows a man throw a brick at the Wiener's Circle in Lincoln Park after police said he became angry when staff asked him to wear a mask.

Police said the man became angry and threw snow at the employees and left in a car. He then came back and was caught on camera throwing a brick at the front door, breaking the glass. No one was injured.

The Wiener's Circle said it will give away two bulls tickets or a throw a party for anyone who helps lead police to the suspect.

Alright sleuths…the brick thrower owes us $400 bucks and an apology at minimum. He was driving a Kia Soul, license plate below (sorry it’s a bit fuzzy). If you crack the code before the ⁦@Chicago_Police⁩ we will throw you a party or give you 2 row 5 center bulls tickets pic.twitter.com/P1ly1hMyfC

"I hope he gets caught," said the general manager Evelyn Morris. "We are all in fear of this COVID but we don't want to be a target for people that don't want to wear a mask or comply by the laws."

The restaurant tweeted a photo of their repaired door saying they're, quote, "hot on the trail" of the vandal.

The door is fixed and we’re hot on the trail of the suspect, thank you to all the sleuths who have reached out pic.twitter.com/63RVocLyJc