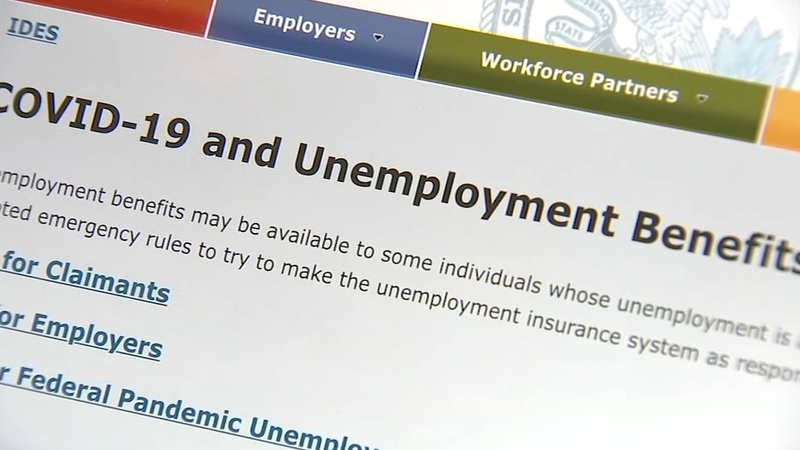 Why are thousands still waiting for Illinois unemployment benefits?

LISLE, Ill. (WLS) -- Complaints about filing for unemployment in Illinois continue to come in, ranging from website glitches to technical problems to waiting on hold for hours.

One suburban woman kept a record of the hours, days and weeks she's spent trying to get her money and still hasn't seen a dime.

"I feel that I'm at a stalemate. There's really--I don't really know what to do at this point. Other than wait until the government offices reopen again and then I can only imagine the line," said Lisle resident Linnea Wittwer.

Wittwer has been trying to get unemployment since she stopped working at her retail sales job on March 15. Her store eventually shut down during the pandemic.

"I am in retail sales and I've been there a long time, but that, you know, I'm not making the big bucks, and then only goes so far, you can only make so far," she said.

Witter said she's already used her $1,200 federal stimulus check and is having no luck getting state unemployment through the Illinois Department of Employment Security (IDES).

"I get an error message saying my temporary password has been expired. This has happened every occasion I try to log in. It says contact local office," Wittwer explained.

When she calls, she's had no luck. She showed the I-Team screenshots of her calls: on hold for 55 minutes up to more than 2 hours.

"I've been on hold since 7:30 this morning and I've been trying since March. So, I mean, do the math, clearly there is a problem," she said.

At one point, Wittwer said she made progress with a certification but that led nowhere due to technical problems.

"I definitely have lots of bills. My mortgage, my food, my phone, and then there's my car insurance," Wittwer said.

In a recent news conference, Republican lawmakers said their constituents are fed up.

"I've asked them to beef up the staff, I've asked him to go out into the private sector," Illinois State Representative Jim Durkin said. "You know, I'm still hearing the same complaints from people in my district, who are now on a month and a half of without receiving any type of benefits from the state of Illinois which their employers have paid in for this specific circumstance. It's unacceptable."

On Wednesday, the I-Team asked Governor Pritzker about the dozens of complaints they've received on their hotline and in their email.

"Many, many applications have been processed, 800,000 applications or more, and the numbers of people that we have seen having trouble are a fraction of that. That doesn't make it any easier, I know. so that is why we increased the ability for so many people to call in and even that can be difficult sometimes and I would ask for people's patience," Pritzker said.

But 24 hours later, the governor announced changes to IDES, including a new call center and more agents to process claims.

"For those of you reaching out over the phone our new call center is ready. There will be 100 new agents by Monday. And we will continue to scale it up with an 100 additional agents taking call," Pritzker said Thursday. "For those filing online, while there is still more work to be done, IDES' computer system has been improved measurably. Load times average less than one second."

Pritzker acknowledged the increase in unemployment claims taking the US to its highest level since the Great Depression.

"The financial toll on the people of Illinois has been breathtaking," he said. "And it's unprecedented. IDES is often an often-overlooked agency, which has been fundamentally defunded over many years. It has 500 fewer employees now than it did during the Great Recession a decade ago. Its computer systems, like those of many other states, was built in the aftermath of the Great Recession with the idea that nothing could ever be worse than the Great Recession. If this current crisis has seen, national unemployment claims surpassed that era several times over. IDES' systems were unfit to handle the surge, causing tens of thousands of Illinoisans to wait at a moment when families are hurting at a scale the world hasn't seen before in our lifetimes."

The governor added that a fairly new "chat bot" helped with 2.3 million inquiries, something Wittwer said also didn't help with her case.

The I-Team sent Wittwer 's detailed information to IDES, but have not heard back. As she waits, desperate for answers, she is also praying that she can qualify for unemployment backpay.

"It's been really frustrating to try to do that and I'm here as well, to try and do it every single day, and only to log on and you get the same error messages repeatedly on the website. There's no one to physically reach out to," she said.