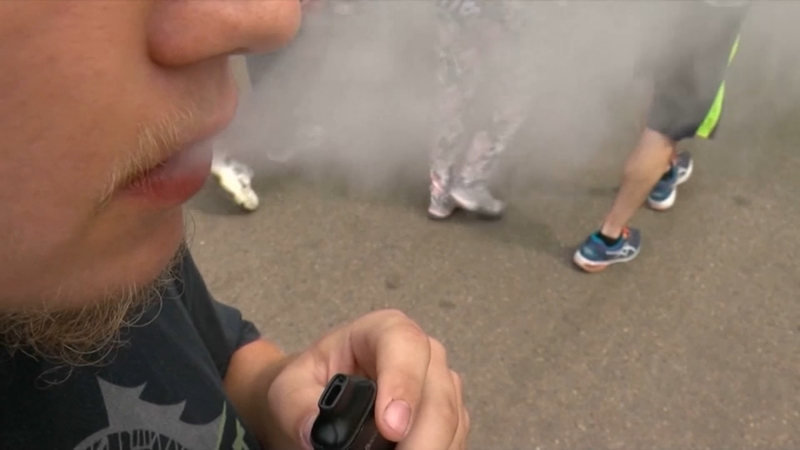 CHICAGO (WLS) -- New numbers from the Centers for Disease Control and Prevention show widespread use of tobacco products in middle and high schools in the US.

The numbers have gone up by millions of students over the past two years.

"As far as the vaping - horrific. It should not even be on the market to be honest with you," grandmother Joann Schalz said after hearing the news.

And yet, according to the CDC, the number of middle and high schoolers using tobacco products, including vaping, has almost doubled in just two years.

"It's scary as a mom just to know it's out there in schools," mother Ashlee Loughran said.

Loughran's son Parker is in sixth grade. He said he knows someone who was expelled for vaping.

"The allure of vaping has brought a whole new generation of youth to tobacco in ways that really make us highly concerned as pediatricians," said Dr. Matthew Davis, Lurie Children's Hospital Department of Pediatrics chair.

Davis said the potential for long-term damage is high.

"The deaths that we've seen here in Illinois from vaping are only the tip of the iceberg in terms of what we are going to find out about the health problems of vapes in the future," he said.

In 2017, the CDC was celebrating a big drop in youth tobacco use. Then it was down to just 3.6 million middle and high school students saying they had used any tobacco product in the past month.

Only one in five high schoolers and one in 18 middle schoolers reported using tobacco products.

That's one in three high schoolers and one in eight middle schoolers, with e-cigarette products leading the way.

"We haven't realized the danger of the products yet, so it feels like we're back in the 50s with cigarettes," father Ray Shannon said. "Feels like we're reliving the same nightmare all over again."

School districts in and around Chicago, Oswego, Belvidere, McHenry and Elgin have the most suspensions because of tobacco, according to the Illinois State Board of Education.