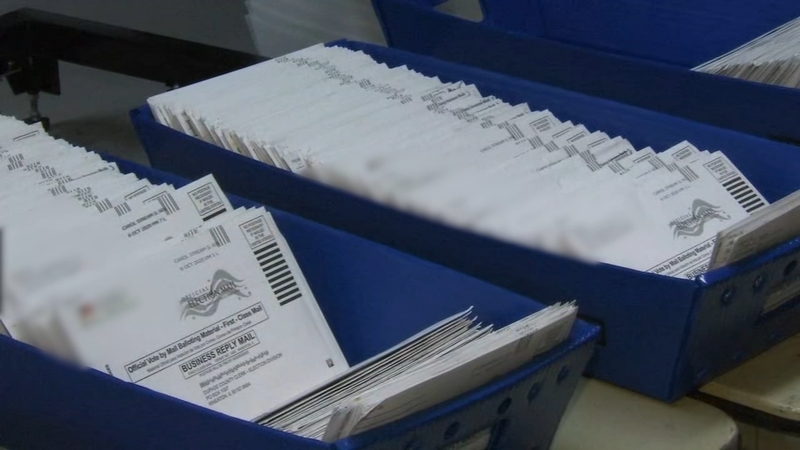 CHICAGO (WLS) -- With the 2020 election less than a month away, officials are reporting a record-shattering influx of requests for vote-by-mail ballots in Illinois.

New data analyzed by ABC Owned Television Stations and the ABC7 I-Team shows a small number of those ballots have been rejected by election authorities in past years.

WATCH: How to vote by mail in Illinois

What that may mean for this current election is not yet determined, but election experts said there are simple steps you can take to make sure your mail-in ballots are counted.

There are now more than 2 million applications across Illinois counties, which is more than four times as many as the 2018 election that was the previous high.

COVID-19 obviously one cause; but this politically supercharged election cycle can't be overlooked.

"Vote by mail is not in any way comparable to any election we've seen before. It is off the charts," said Matt Dietrich with the Illinois State Board of Elections.

More than 300,000 mail ballots have already been sent in and that is on top of more than 100,000 early votes cast in-person at special polling places.

And in DuPage County the mail keeps rolling in, after nearly 190,000 people already requested mail-in ballots.

This year, as in the past decade since mail-in voting began in Illinois, some ballots are rejected for a variety of reasons.

DuPage County Clerk Jean Kaczmarek doesn't expect the reasons for rejection to be different than years past.

"Generally, a ballot would be rejected if it wasn't sealed, or if it wasn't signed, or if the signature did not reasonably match what's on file for the voter registration," said Kaczmarek.

SEE ALSO: Illinois counties with 10% mail-in ballots rejected in 2016 and 2018 US elections

In DuPage County, in the past two elections, more than 2% of mail-in ballots were rejected according to data analysis by ABC Owned Television stations.

Cook County had a much smaller portion rejected but it also increased two years ago.

Will County had a less than 1% rejection rate.

It's not easy for a ballot to be rejected.

"It takes a consensus, a unanimous decision of three election judges that your signature is not valid before your ballot can be rejected for having an invalid signature. Now, also that same election authority is required to notify you the voter," said Dietrich.

That notification must come within two days and the voter would then be able to submit a statement that the signature and ballot is genuine. Dietrich said Illinois gives voters a very good chance to redeem or cure those ballots.

Kaczmarek is also confident of the safety nets built into the process.

"Our office would be contacting that voter very shortly and give them the opportunity to remedy the situation," said Kaczmarek.