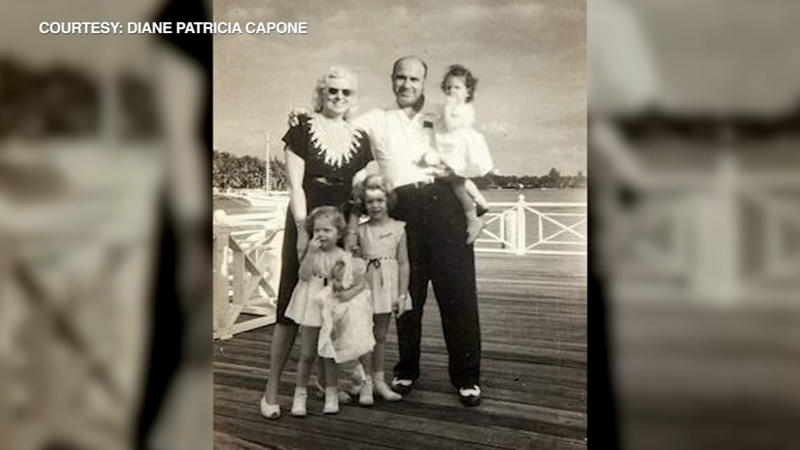 CHICAGO (WLS) -- The second granddaughter of Chicago's most notorious organized crime boss is sharing unscarred memories of the man she called "Papa."

Al Capone died 75 years ago this month, but to this day he is still known around the world.

Diane Capone talked to the I-Team about the man she only knew as a loving and generous grandfather.

"I was a very little girl when my grandfather was alive," she said.

RELATED: 75 years to the day after Al Capone's death, it's not your father's Chicago Outfit

Diane Capone was 3 years old when her grandfather Al Capone was living at his post-Alcatraz home on Palm Island, Florida. She took pictures with him there during a Christmas visit.

"I remember the morning that the picture was taken because that was Christmas morning at Papa's house," she said, " I remember vividly my grandfather sitting in the chair in the living room, near the big Christmas tree and just smiling from ear to ear."

When the 48-year-old Capone died at that same waterfront home, duplicate caskets were sent to Chicago to prevent the body from being stolen.

75 years ago this week the ruthless gangster was first buried at Mt. Olivet Cemetery but later moved to a family grave site in Hillside where a simple marker asks Jesus for mercy.

"The man that I knew, was a very loving grandfather. And certainly a very loving father, my dad idolized his father," Diane Capone said. "I understand that there are an awful lot of people who know about things that happened back in the '20s and so forth, you know, I can't really speak to that."

Diane Capone wrote a book about him, based on her young memories and conversations with her grandmother.

"There are very few people who are all bad or all good. Most of us are some combination," she said. "I think my grandfather certainly lived at a particular time in life, where he didn't have an awful lot of options. I think he certainly went down a very unfortunate path. I don't mean to any way rationalize that, but I know that he was trying to take care of his family. And that, I assume, believe, that was the only option open to him. He didn't finish school. He didn't have any advantages of having any mentors other than people who were involved in things that were risky."