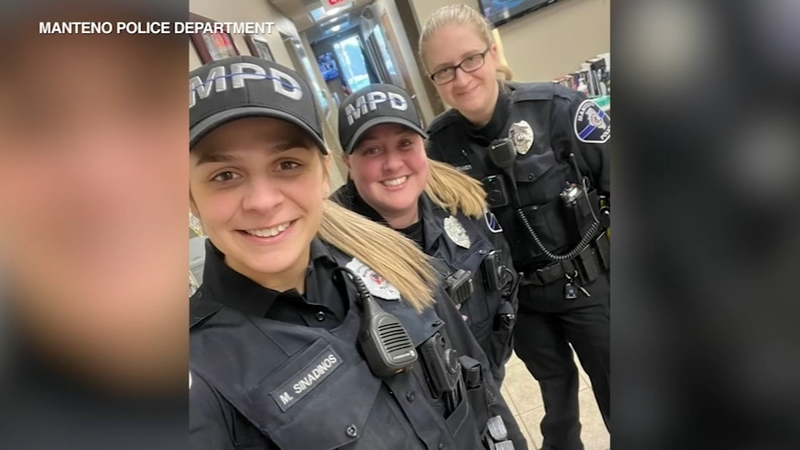 MANTENO, Ill. (WLS) -- History was recently made at a suburban police department.

"When we were all standing in the break room? We're like oh my God, it's only us today," said Officer Miranda Sinadinos.

For the first time ever, the Manteno Police Department had a shift staffed entirely by female officers.

"We're like we should probably capture this moment. Officer Sinadinos put her selfie arm out and captured the moment and it just kind of took off," said Officer Jessica Rourke.

The selfie of officers Sinadinos, Rourke and Karen Brandt was posted on the department's Facebook page.

"There was mostly good comments. There was some negative, which is expected, but mostly good," said Officer Sinadinos.

Officer Rourke was once the only woman on the force in Manteno. Now, three out of the 20 officers on staff are women.

"We didn't even have a female locker room when I started. We had these magnetic things where one would be like a female officer changing or male one," she said.

Many departments struggle with recruiting women.

"We're not a white male community. So I would like to see 50% female in our department," said Chief Alan Swinford of the Manteno Police Department.

With just how the scheduling works at this department, Swinford said sometimes women will be the only ones on duty for a shift, keeping this community safe and inspiring young girls.

"It makes no difference that if I have men backing me up or the two girls, I feel comfortable with any of them backing me up," Rourke said.

She and Sinadinos are hoping with time a selfie of a female-only police shift won't be so remarkable.

"It makes you feel so empowered to be able to do this job because everybody does think it's a male field and it's not. Females have a place here for sure 100%," Sinadinos said.
Report a correction or typo
Related topics:
community & eventsmantenowomen's history monthhistorypolice officerwomenselfie
Copyright © 2022 WLS-TV. All Rights Reserved.
WOMEN'S HISTORY MONTH
'Together We Rise': Women business leaders write about experiences
Female doctors could earn $2M less than men over career, study says
City honors ABC7 employee for Women's History Month
Our Chicago: Women work to educate, protect young Chicago girls
TOP STORIES
Security guard shoots man in buttocks at Millennium Park
Chicago mass shooting victim ID'd as father of 2, with twins on way
Teen boy's death after scam is part of increase in 'sextortion': FBI
9 shot, 2 fatally, on Near North Side
BARK returns to the park to support dogs in need
Russia's claim of Mariupol's capture fuels concern for POWs
2 robberies happen 1 day apart at CTA bus stop on South Side: police
Show More
US, South Korea open to expanded military drills to deter North
3 wounded in separate shootings on South Side, Chicago police say
Chicago Weather: Occasional showers, thunder Saturday
CTU elects Stacy Davis Gates as new president
Postal police say they are sidelined during time of heightened crime
More TOP STORIES News