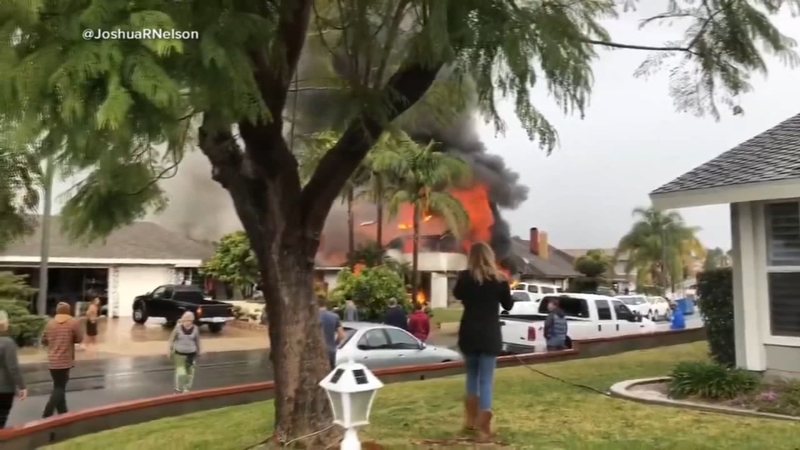 YORBA LINDA, Calif. (WLS) -- A 75-year-old man was at the cockpit controls during a horrific plane crash in Southern California on Super Bowl Sunday, police said.

Five people were killed, according to authorities in Yorba Linda, when the Cessna piloted by Pastini crashed into a suburban neighborhood near Los Angeles. Police say he was a veteran private pilot and restaurateur.

Five people were killed and two others were burned Sunday afternoon after a small plane crashed in a Yorba Linda neighborhood, authorities said.

A federal air safety team was working Monday night to determine what happened and why.

There were small explosions when the Cessna 414-A hit a home and killed four family members hosting a Super Bowl party. Two men and two women in the home were killed in the fiery crash and then the plane bounced into another backyard. Burning plane parts were scattered throughout the neighborhood.

Investigators say the pilot has just taken off from an airport about ten minutes away and took a sharp left turn before falling from the sky.

"Preliminary radar data show that a airplane climb to about 7800 feet before started rapidly to the center of the ground," said NTSB investigator Maya Smith. "A few witness reports say that they saw the airplane coming out of a cloud at a very high speed before parts of the airplane such as tail and then subsequently wings started to break off."

Another NTSB officer, Elliott Simpson, said there was a four-block long debris field. "We're in the process of documenting the debris and the wreckage," Simpson said. "The main cabin of the airplane along with one of the engines came to rest at a bottom of a ravine in the backyard of somebody's house."

Pastini was a restaurant owner in Nevada and apparently flying to see family members in Southern California. He was said to have retired from the Chicago police department in the mid-1980s after 21 years on the force. Chicago police officials on Monday said they were unable to verify that an officer by his name or another name he was known to use actually worked for the department.
Report a correction or typo
Related topics:
californiaorange county fire authorityhouse fireu.s. & worldi teamfirefightersplane crash
Copyright © 2022 WLS-TV. All Rights Reserved.
I-TEAM
I-Team: The QR Con
75 years after Al Capone's death, it's not your dad's Chicago Outfit
34 state prisons on COVID lockdown as cases soar
Tips for tax season
TOP STORIES
Bitter, dangerous cold moves into Chicago area
Aurora woman honored for tireless work to help homeless
2 suspects linked to 8 armed robberies, carjacking on NW Side: CPD
Bears hire Ryan Poles as new GM
School Closings: Chicago Area Complete List
75 years after Al Capone's death, it's not your dad's Chicago Outfit
Death of ISP trooper, wife ruled a murder-suicide
Show More
Man denied heart transplant because he has not received COVID vaccine
Chicago Weather: Sunny, very cold Wednesday
Apple CEO allegedly stalked by woman who showed up at house
Original 13th Amendment on display in Chicago for Black History Month
St. Charles woman sues after attacked by neighbors' dogs
More TOP STORIES News