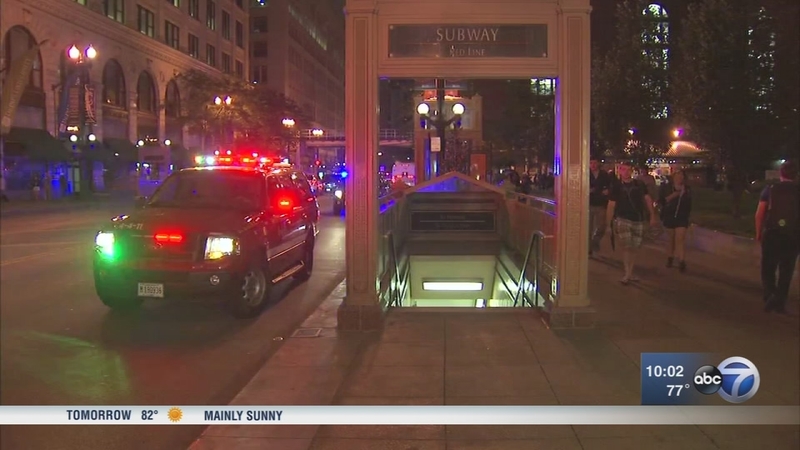 CHICAGO (WLS) -- A 24-year-old man was injured in a shooting at a CTA Red Line station in Chicago's Loop Thursday evening, police said.

The shooting happened about 7:45 p.m. at the Jackson Red Line station at 230 S. State, police said. Police said the man was shot in the left arm and ankle.

The victim was taken to Northwestern Memorial Hospital in serious but stable condition for treatment.

Police said the shooting appeared to be targeted, and that it appears the shooter was waiting for the victim.

"As the northbound subway train was pulling into the station, a subject shot into the train as the doors opened. The offender seemed to target a subject on the train, in which time he fled the subway up the stairs," said First Deputy Superintendent Kevin Navarro, Chicago Police Department.

Police also said they would be reviewing CTA surveillance footage in their investigation.

Passengers on the train described absolute pandemonium: people hitting the ground, others scattering on the platform in all directions. One man said he was beaten and had his bag stolen in the chaos.

"I was a little scared by it. Seeing other people lying on the floor was a scary experience. And then when they said we were holding, waiting for police with the doors open, that was a little shot of terror," said Andrew Lapin, passenger.

Lapin, who heard the shooting, said he was sitting near the back of the train, and the shots came from four or five cars in front of him. He did not see the victim or shooter.

The Jackson station was initially closed for the investigation, and Red Line trains were halted, but normal services resumed on both the north- and southbound tracks shortly before 10 p.m. Trains were previously rerouted to elevated tracks.