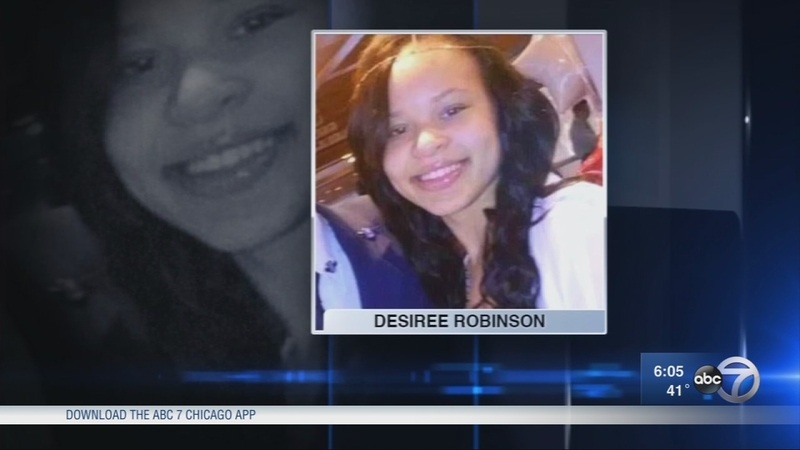 MARKHAM, Ill. (WLS) -- Police in south suburban Markham are investigating after a 16-year-old girl was found dead in a garage on Christmas Eve.

Desiree Robinson, 16, was found dead in a garage in the 16200-block of South Hamlin Avenue. The Cook County Medical Examiner said Robinson died from injuries from an assault and ruled her death a homicide.

"I want everybody to know Desiree was a beautiful, kindhearted, free-spirited girl," she said.

Markham police said that Robinson was found by friends with the assistance of the homeowner. Police are following up on leads with the South Suburban Major Crimes Task Force.

"She didn't deserve this. And there are a lot of babies out here that don't deserve it," she said.

Robinson is urging anyone who knows anything to come forward.

"Please come to the police station and say something," she said. "If you know anything, please say something. So that way, it's not your child next because it could very well be any one of our children."

"What you did to our granddaughter because of our love, we would not want that to happen to you," Robinson's grandfather said.

Investigators are not saying how long her body had been in the garage. Although police are calling this a random and isolated incident, neighbors are now living in fear.

"If it can happen in a nice neighborhood like this it can happen any place, it's rather disturbing," Bob Hosclton, a neighbor, said.

Robinson's grandfather, Dennis Treadwell, said he had temporary custody of Robinson. Treadwell said he and his wife reported Robinson missing with Chicago police on December 13 after he hadn't heard from his granddaughter in a couple of weeks.

He warned his granddaughter to stay alert.

"We tried to tell her that it's very dangerous out here, that you have to watch out for yourself Desiree, and she had her own mind and had her own goals," Treadwell said.

Her close friend, who did not want to be identified, said she could not believe what happened. In fact, the girls had plans to see each other this week.

"I was in denial, that's how hard I took it, I'm like, that's not true, I know Desiree. Desiree hasn't been murdered, but yet she was and it was hard trying yeah, that did happen," she said.

Treadwell said Desiree had plans to go to college after she finished school. Now, her family and friends now left with many questions and a lot of grief.

"It's the worst thing that you could ever imagine and you see people around you getting killed and that kind of thing and you don't think that it will hit home like this and here it is," Treadwell said.

"Desiree was not the type of person to be around that, she was always somewhere safe," Desiree's friend said.

Both Desiree's family and friend said they do not know if she had any ties to Markham.