WLS
By Leah Hope, Diane Pathieu and Rob Elgas
WHEATON, Ill. (WLS) -- The second of five Wheaton College football players accused of hazing a freshman player last year turned himself in Tuesday after police called on the players to do so.

Earlier on Tuesday, with his parents and lawyer by his side, Kyler Kregel surrendered to Wheaton police. He was the first football player to turn himself in.

"He will have an arraignment date on October 23rd at 10 o'clock. And we will try the case in court," said Christine Field, Kregel's Attorney.

On Monday evening, felony charges were announced for Noah Spielman, Samuel Tebos, James Cooksey, Ben Pettway and Kyle Kregel. Police said the five players dragged a freshman teammate kicking and screaming from his dorm room last year, tied him with duct tape, and left him beaten and half-naked with two torn shoulders on a baseball field.

'We have reason to believe hazing has taken place with the football team for a number of years," said Terry Ekl, the alleged victim's attorney.

Wheaton College released a statement that said, in part, "Our internal investigation... resulted in corrective action. We are unable to share details... due to federal student privacy protections."

"They are very serious charges. They are felony charges of aggravated battery, mob action and unlawful restraint, so the individuals will be answering to felony charges," said Wheaton Police Chief Jim Volpe.

Wheaton police said the incident happened in March of 2016. A long investigation led to the charges, and the five players will have to turn themselves in to police custody.

In a statement, a spokesperson for Wheaton College said, "When this incident was brought to our attention by other members of the football team and coaching staff in March 2016, the College took swift action to initiate a thorough investigation."

Three of the five student football players were on the roster for Wheaton College's game last Saturday. The victim apparently left the school after the incident. 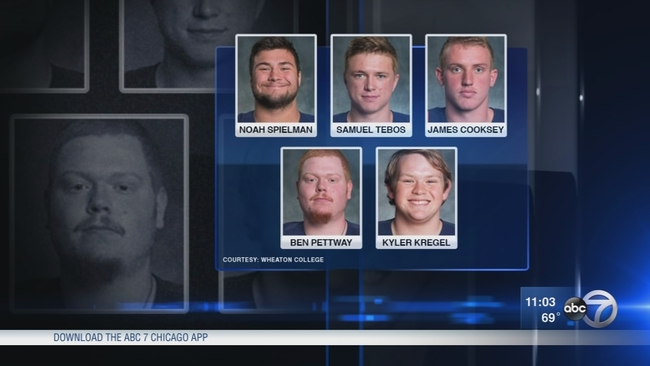