WLS
By Chuck Goudie
CHICAGO (WLS) -- Amid new terror threats against America the ABC7 Eyewitness News I-Team has learned some residents of a Chicago icon are concerned for their safety.

They live in the John Hancock Building where the I-Team has been examining security for years.

At the John Hancock, the third-tallest residential building in the world, some residents Wednesday night asking, "Are we secure?" It's not just the new terrorist organization and new threats of an attack on mainland America.

One thing at the Hancock hasn't changed in years is thousands of visitors are able to go to the top of the tower without any physical screening.

The gateway to the tip of the Hancock, home of the 95th Floor Restaurant, there is no screening of anyone entering here to go to the top.

That much hasn't changed in the four years since the I-Team uncovered this: The Hancock used as set-up in an al Qaeda recruiting magazine for an article about waging personal holy war against United States targets.

Despite that, and renewed terror threats tonight from overseas, cars enter the Hancock parking garage without any security check.

They used to inspect vehicles here for explosives, as guards still do across town at Chicago's tallest building, The Willis Tower.

Some of the 1,800 people who live in the Hancock reached out to the I-Team about their security concerns in a statement.

"...we are very disappointed in the lack of visible security in our building," the statement reads. "It gives us great pause for many reasons including our inability to obtain personal damage insurance caused by acts of terrorism. We are hoping the new owner of the John Hancock Center will raise the level of security on par with other world class buildings in Chicago and around the country."

One long-time resident says he feels secure but would support metal detectors.

"I would probably be a fan," said Ravin Gandi. "In the commercial side of the building where the general public was allowed in, yes, I could see them doing that."

The half-million annual visitors to the 94th floor Hancock Observatory are subjected to bag checks.

That layer of security was added following an I-Team report a year ago.

In a statement Wednesday night, the 360 Chicago Observatory owner said: "The company has invested in upgrades to surveillance footage, bag-checking and other security procedures for the 94th floor visitors."

But there are still no metal detectors for observatory guests, something that got the attention of a tourist from Scotland.

"I've been in the Empire State Building and it seems to be a lot more stricter," Stuart Lindsay said.

Employees who work in businesses there are required to use electronic pass cards, but do not go through bag checks or metal detectors.

"We don't have that (metal detectors) here, no," said Allan Perales, who works in the Hancock. "That's not something that's needed, per say, but who am I to say, it's not a part of the policy."

"I think the security Is really good," said Hancock worker Lilly Bromann. "We all have ID cards and to get to every floor you have to use it."

In 2009, New York City published a building security guideline stating: "High risk buildings should have 'outsiders' pass through magnetometers and their bags should be x-rayed... Vehicles should be screened."

The city of Chicago does not have such guidelines. Chicago's Office of Emergency Management told the I-Team: "The (Hancock) building has a comprehensive evacuation plan with all of the requisite information on file with the city. The city also partners with the Public Private Task Force to ensure the private sector, including high rise buildings, is part of our emergency planning and preparedness efforts."

The city Wednesday night says building owners are in charge of their own security.

The I-Team contacted the Hearn Corporation, which owns Hancock lobby and office space, but they didn't answer our calls or emails, neither did the president of the Hancock Condo Owners Association.

Concerned building residents say they asked him for a building security committee to address their concerns. After one year, they say they're still waiting. 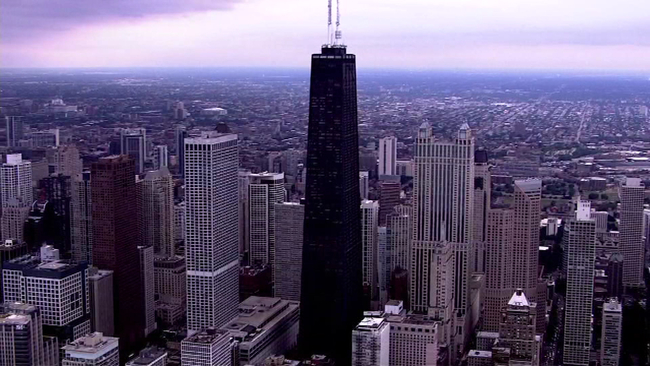