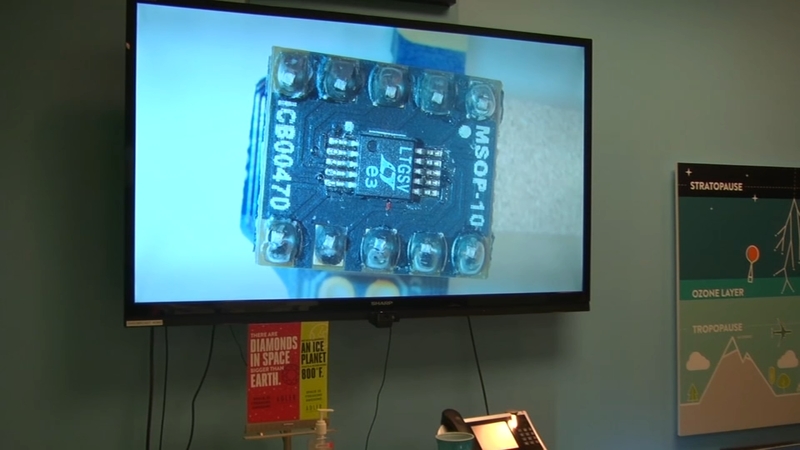 Local students develop tech to be launched into space

CHICAGO (WLS) -- On April 17th, an Antares rocket takes off for the International Space Station. But the upcoming mission includes an extra payload: bundles of small student-made satellites called ThinSats.

Adler Planetarium Systems Engineer and Educator Jesús García described ThinSats as "many slices of bread all put together that will fold out like accordions and fly a round orbit around our planet."

The project is funded by Virginia Space, which sent STEM equipment to schools and educational institutions. Here in Chicago, the Adler team wants to specifically use light sensors to look beyond our solar system.

"We'd like to identify whether we can see land features, such as polar ice caps, water, vegetation.... Can we identify that on our own planet with rudimentary sensors as if we were looking at an exoplanet," explained García.

Throughout last school year he taught ITW Speer Academy seniors coding, soldering and circuitry at Adler's Far Horizons lab. The finalized ThinSat was sent to Virginia Space to be packaged up with other experiments, all launching on April 17.

Some of these integrated circuits are so small that a penny covers them; some of the light sensors alone are even smaller. Yet the impact of building a satellite was the complete opposite for teens involved.

"You never know that a requirement from school can become a big part of your life... you're always going to have that background that you were part of something bigger than you ever thought you could," said Fatima Guerra, one of the Speer students last year who helped make the ThinSat.

As the countdown continues to this inaugural ThinSat launch, more Adler teens are perfecting a 2.0 version of the satellite for the next mission.

"It's mind-blowing that I'm a part of it and that I get to help and get my own ideas, instead of sitting quiet by myself," said Shuntyia Green while soldering materials.