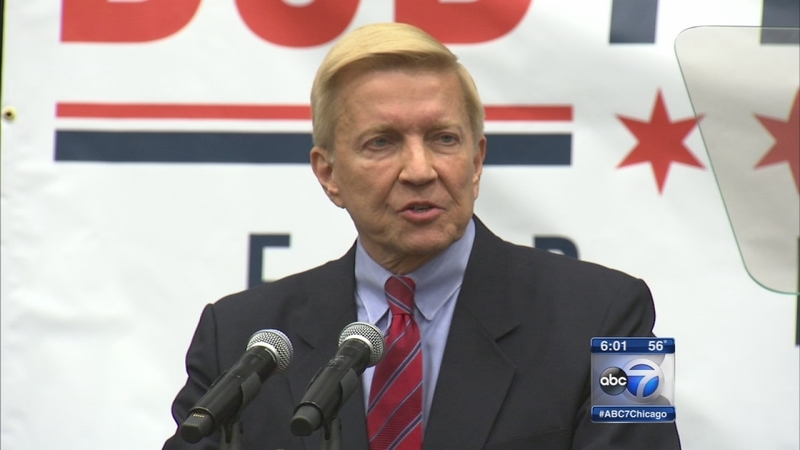 CHICAGO (WLS) -- Alderman Bob Fioretti jumped into the race for mayor of Chicago Saturday with an attack against Mayor Rahm Emanuel and the mayor's campaign fired back.

Fioretti launched his campaign with a website and a campaign video.

The two-term City Council member wasted no time criticizing current Emanuel, painting him as out of touch, unwilling to listen, and divisive, a politician of broken promises on jobs, crime, and education, and attacked his administration's policies like charging not-for-profits and churches for city water.

"But our schools are being gutted, our streets are not safer and so many are missing out on economic opportunities and jobs," Fioretti said.

The Second Ward alderman made his announcement Saturday morning before a crowd of about 100 supporters at East West University in the South Loop.

"Four years ago, Rahm Emanuel promised he was going to be tough. People voted for tough, but all we got was tough luck," Fioretti told the crowd.

Fioretti proposed a 1 percent commuter tax, arguing that some 600,000 suburbanites who work in the city take $30 billion out of Chicago's economy when they go back home.

During his speech, he also said he would support a $15 an hour minimum wage for employees working for companies with revenue of more than $50 million a year.

"It is a wage that will give people respect and will help so many in this city get a leg up," he said.

Emanuel did not comment about Fioretti's candidacy while at a library dedication on the city's northwest side, but a spokesperson for the his campaign released a statement slamming the challenger.

"Time and again, Alderman Fioretti has shown no backbone for making tough choices and little respect for Chicago taxpayers' pocketbooks," the statement read. "Chicago can't tax itself out of its problems. Chicago needs, and has, a strong leader who has shown that he is willing to make tough decisions."

"You better look at what's happening and what he's doing," Fioretti responded.

"They do share the same base in the African American community," Washington said. "The strategy could be to pull off enough votes from Rahm to force a runoff and the stronger of them could defeat Rahm in the next round."

A recent poll found Fioretti has only minimal name recognition with the majority of voters outside his ward.