"I was gonna put my shoes on. I had flip-flops on; everybody's making fun of me (for that)," Eugene Bozzi said.
WLS 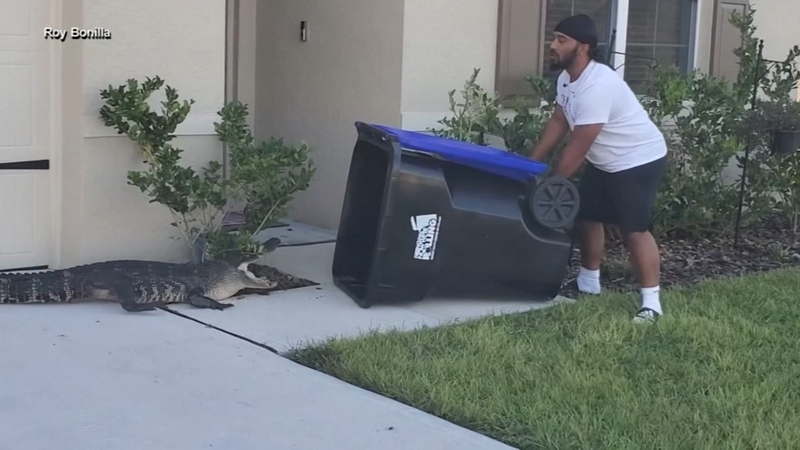 Army vet from Philly catches gator in trash can

PHILADELPHIA -- A brave U.S. Army veteran from Philadelphia put himself into the danger zone when he was faced off with a surprise home invader, launching him into viral fame.

Eugene Bozzi's kids were playing outside of his Orange County, Florida home on Tuesday.

Bozzi's family knew the noise was coming from the bushes in a neighbor's yard.

"My daughter came and got me. I couldn't really see it, so I got close up on it, and he backed up a little bit, and I was like, 'he's kind of big,'" Bozzi said after coming face-to-face with the alligator.

The father jumped into action immediately.

"I was gonna put my shoes on. I had flip-flops on; everybody's making fun of me (for that)," Bozzi said.

How to catch a gator 101: You're going to need a bigger trash can! This might sound like something out of a movie, but not even Hollywood could write this script!

And he was armed with the best thing he could find.

It was a showdown between a gator and a guy with his garbage can.

With the trash can, Bozzi was able to back the gator up. He flipped up the can's lid and waited for the alligator to approach.

Once the alligator's head entered the trash can, Bozzi flipped the lid down.

The North Philly native, still in flip-flops, walked the gator across the street and down the hill.

Eugene Bozzi from North Philadelphia only needed a trash can to get the gator back to the water.

He eventually rolled the trash can to the edge of the water, quickly dropped it and ran away. The gator slowly made its way out of the trash can.

Bozzi returned and pushed the can, which gave the alligator a nudge to get into the water. He then grabbed his trash can back.

Bozzi said that's the one moment where he was truly scared.

"When I got down to the hill, I thought 'if I'm dropping him off, there might be three more in the bushes,'" Bozzi said with a laugh.

His neighbors and many of the millions who have seen the now-viral video have called Bozzi a hero. But he's just happy no one was hurt - gator included.

"I love all animals. I don't care how vicious they are, how heavy they are, how small they are; we're connected somehow. We're on this planet. I think it was my duty to protect everybody and the animal came out alright," Bozzi said.

Bozzi has only lived in Florida for a year.

He says since this video went viral, he's been fielding calls from talk shows all over the world, including Australia.