CHICAGO (WLS) -- A fire on the city's Northwest Side claimed the life of a 10-year-old boy and injured several of his family members.

Several people had to jump to safety and dozens of people are without a home Sunday night. Firefighters were first called to the home around 4 a.m. Sunday morning in the 5700-block of North Kimball. 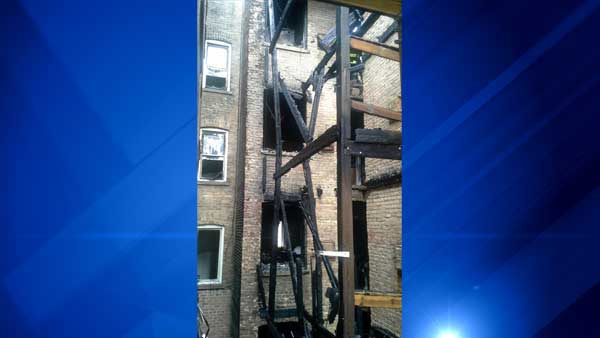 PHOTOS: North Side apartment fire kills 1, injures 11
Crews battled a fire in a Hollywood Park apartment building that has killed a child and injured 11 other people, officials said.

Both his parents and siblings of the unidentified 10-year-old remain hospitalized Sunday night. In the meantime, officials continue to try to determine the cause of the fire.

"They were literally jumping out of the window," said witness Rehana Patel. "It was like nothing I've ever seen. It was terrible."

It was just about 3 a.m. Sunday when they fire broke out in a four-story apartment building in the Hollywood Park neighborhood.

The blaze caught residents by surprise, but while most were able to evacuate safely, others were not. Trapped inside their fourth floor apartment by the fast-moving flames, a family of five was forced to escape, the only way they could, through the windows.

"The dad had his kids, there was a lot of smoke coming out of the window. He throws his kids, held them by the ankle and drops them and a bunch of people went and caught them," said Daniel Sendroiu. "Him and his wife, they jumped also.

Two of the couple's children were thrown to safety and taken to Thorek Hospital, where they remained Sunday night. But a third child, a 10-year old boy, according to police, was trapped and later found dead by first responders.

"It's traumatic for all of us," said Deputy Chief Anthony Vasquez, Chicago Fire Department. "It makes it difficult for us to go home and look at our children."

In addition, the fire department says eleven others were injured, including five children. As for the building's other residents, the American Red Cross says ten families, 27 people in total, were displaced as a result of the fire.

Earlier, some were allowed back inside to try and recover what they could. In some cases, it wasn't much.

"Just a few things, a few clothes here and there," Charles Hurdle said. "I just thank god that we're alive, that me and my family are ok."

Sources tell ABC7 Eyewitness News that the fire may have been the result of arson, but neither the fire department nor the police department will confirm, saying only that the investigation is ongoing.