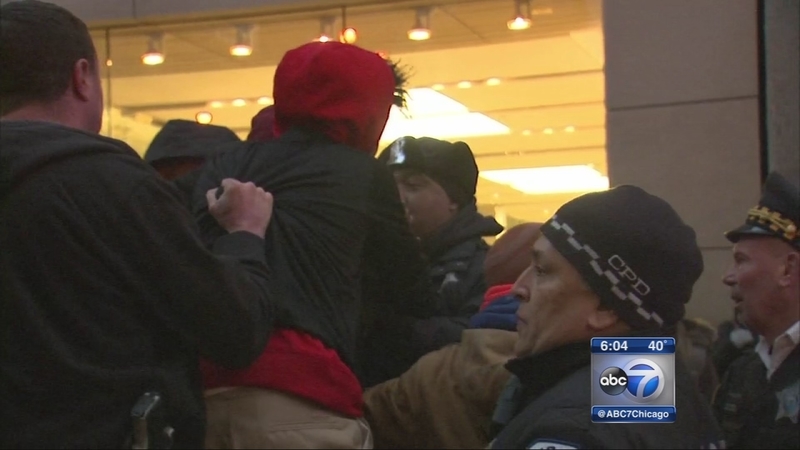 CHICAGO (WLS) -- Rallies took place Tuesday evening at Apple stores in Chicago and in cities across the world to protest a court order forcing the tech giant to help the FBI hack into a locked iPhone belonging to one of the San Bernardino terrorists.

But most of the protesters in Chicago were not there to support Apple but, instead, to call for Mayor Rahm Emanuel's resignation after the Laquan McDonald shooting.

Shortly before 6 p.m., protesters scuffled with police who tried to keep them from blocking the entrance to the Apple store on Michigan Avenue. At least one person was arrested.

But people who showed up to rally in support of Apple also supported their fellow protesters, even if their topics diverged.

"I don't' think that it's the type of thing where there's only room for one type of protest, I feel like all of our messages are important, all of them need to be heard, and it's important we get out here and exercise our voice," said Apple supporter Kyle McDaniel.

Rallies are planned Tuesday at Apple stores in Chicago and in cities across the world.

A group called Fight for the Future helped to coordinate the demonstrations.

The protesters are against Apple being forced to compromise security features that protect all users' personal data. The court order sides with an FBI request to create a master key that would unlock the iPhone. Protest organizers said that would put everyone at risk.

"It goes far beyond this single case for this single phone, and in fact they're actually asking Apple to do something that puts millions of people's safety and security at risk," says Evan Greer, campaign director for Fight for the Future.

Investigators believe there could be critical evidence on San Bernardino shooter Sayed Farook's phone, which has remained locked to their frustration.

Many of the victims' families support the FBI's efforts to have Apple unlock the phone.

"There might be some information in that phone who lead to any other terrorist plots," says Robert Velasco, father of one of the victims.

"I feel very upset with Apple for not cooperating with the FBI," said Arlen Verdenhyou, husband of one of the San Bernardino victims.

In an email to employees, Apple CEO Tim Cook writes, "at stake is the data security of hundreds of millions of law abiding people."

The director of the FBI responded in an open letter, "We don't want to break anyone's encryption or set a master key loose on the land."

Even Microsoft founder Bill Gates weighed in on the controversy, telling the Financial Times that he thinks there's a way for Apple to turn over specific information to the Feds.

"You shouldn't call the access some special thing," Gates said. "It's no different than should anybody ever have been able to tell the phone company to get information."

A Pew Research Center survey showed 51 percent of respondents thought Apple should unlock the phone and 38 percent said Apple should not, to ensure the security of user information. The rest of the people surveyed gave no opinion.