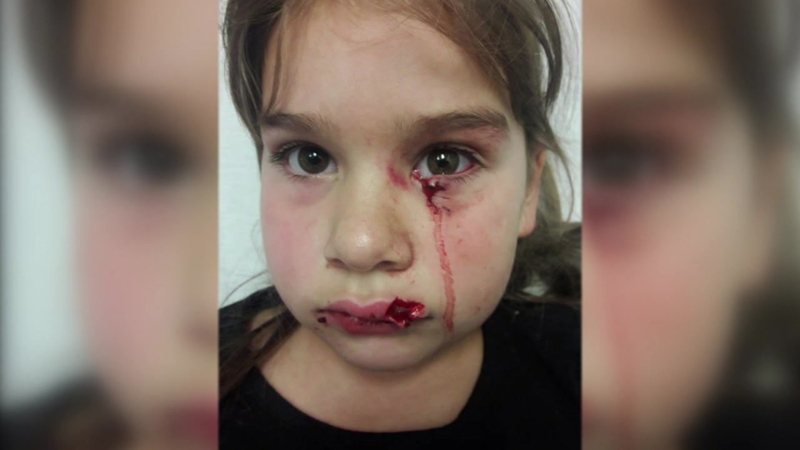 PORTLAND, Oregon -- A mother has filed a $1.1 million lawsuit against the Port of Portland after her 5-year-old daughter was mauled by a pit bull at Portland International Airport. She's accusing authorities of letting a dangerous "emotional support animal" into the airport without a carrier.

Alaska Airlines and the dog's owner, Michelle Brannan, are also defendants in the lawsuit.

In the lawsuit, the girl's mother, Mirna Gonzalez, claims Brannan should have known that her dog had "vicious propensities."

In December 2017, Gabriella Gonzalez, who was five years old at the time, was waiting for a flight with her family when the dog allegedly attacked her. A photo released by the family's lawyer shows her face covered with cuts.

According to the lawsuit, the girl had injuries "to the muscles, tendons, bones, nerves, and soft tissue of her face, eye, eyelid, tear duct, and lip." Those injuries "required surgery to repair complex facial lacerations and a damaged tear duct."

In the lawsuit, Mirna Gonzalez says the airline is at fault for allegedly allowing Brannan to bring a dangerous dog into the gate waiting area, where the attack happened, when the dog wasn't a trained service animal and wasn't properly confined.

At the time of the attack, airport rules said emotional support animals needed to be in a pet carrier. The lawsuit says this dog was not.

The airport changed their rules for animals in June, six months after the attack. Steve Johnson, an airport spokesperson, told KATU News they changed the rules to fit better with what individual airlines require.

According to the Port of Portland, these are the basics animal owners need to know:

Trained service dogs are allowed in the airport any time. A service dog is one that is specifically trained to do work or perform tasks for the benefit of a person with a disability.
Other animals, including emotional support or comfort animals, are only allowed in the airport if traveling with their owner or being shipped by air. These animals must be kept in pet carriers, except when using the pet relief area. Most airlines offer pet carriers, and carriers are available at pre-security news and gift shops.
In rare cases when an animal does not fit in a pet carrier, the owner must carry the animal when practical; otherwise the animal must remain on a leash that does not extend from the body by more than three feet.
All animals in the airport must be housebroken and must be kept under control at all times. If an animal isn't in a carrier, keeping the animal under control means keeping it on a short leash and away from working police and security dogs.
Report a correction or typo
Related topics:
oregonpit bull attackdog attackpit bullu.s. & world
TOP STORIES
Winter storm expected to bring snow to Chicago, NW IN | LIVE RADAR
Girl, 8, killed by stray bullet; man critically wounded: CPD
Kyle Rittenhouse faces new legal issues
St. Charles library closes after threats over mask policy
13 shot, 3 fatally, in Chicago weekend violence
Retired Chicago priest accused of sexually abusing minor 40 years ago
Chicago Weather: Morning snow Sunday
Show More
Slain NYPD officer joined to help 'chaotic city,' partner also wounded
Shipmate dies in 'tragic accident' on freighter on Lake Michigan
How a 73-year-old grandmother outwitted a scam artist
Wounded Bradley police officer out of ICU: Family
Lake Geneva Ice Castles open in Wisconsin
More TOP STORIES News