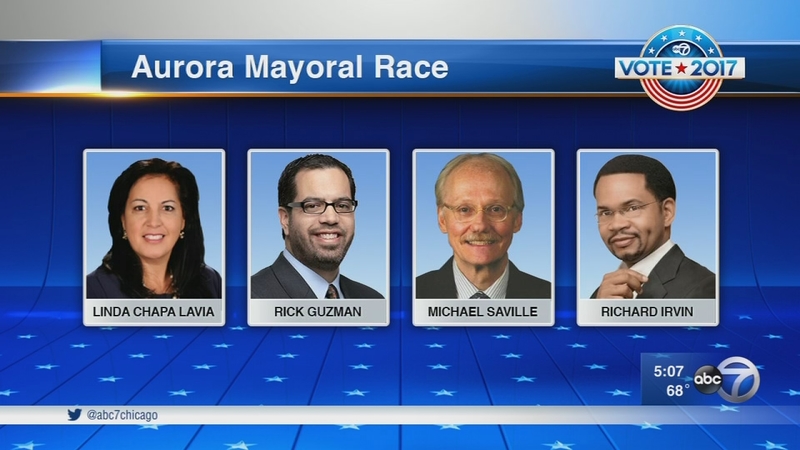 AURORA, Ill. (WLS) -- The race for Aurora mayor is heating up before the non-partisan Feb. 28 primary. Among the candidates who are running is a state lawmaker who just won re-election.

After 12 years of Mayor Tom Weisner, west suburban Aurora will elect a new mayor this year. The non-partisan primary features a Democratic state rep backed by a powerful party leader.

"We made close to eight thousand phone calls in the last couple of months since December. So we're working hard," said Linda Chapa LaVia, candidate for mayor of Aurora.

Now she is running for mayor of Aurora, her hometown. She'll give up the seat in Springfield to do something she says she's wanted to do all of her life.

"I'm excited about the possibilities of Aurora and doing this full time. I really am," said Chapa LaVia.

Along the Fox River in far west suburban Kane County, Aurora is home for around 200,000 people, making it Illinois' second largest city.

"As an Alderman for ten years, I've been directly involved in getting Aurora to where we're at now so we can build on it," said Ald. Richard C. Irvin, candidate for Aurora mayor.

Ald. Irvin and Chapa LaVia's other opponents all say she is a tool of Illinois Democratic Party Chairman House Speaker Mike Madigan, who held a $1,000 a plate fundraiser for the state representative.

Irvin, a former prosecutor, wants Madigan and Democrats to butt out of Aurora's non-partisan mayoral election.

"That means we can have everybody involved. There is no us versus them mentality. We all work together to take Aurora to the next level," said Irwin.

"I have as many Republican supporters right now and my colleagues that I work with in both the Senate and the House than I do here. And nobody here is a Speaker person. Nobody," said Chapa LaVia.

But Irvin said Chapa LaVia's very association with anything Springfield is reason voters should not cast their ballots for her.

"If you look at Illinois, it's the worst run state in the union. We don't want someone from that broken system to tell us what we need to do in Aurora to take us to the next level," said Irvin.

"We have the feel of a hometown girl making it big. At least coming back and becoming the next mayor of Aurora," said Chapa LaVia.