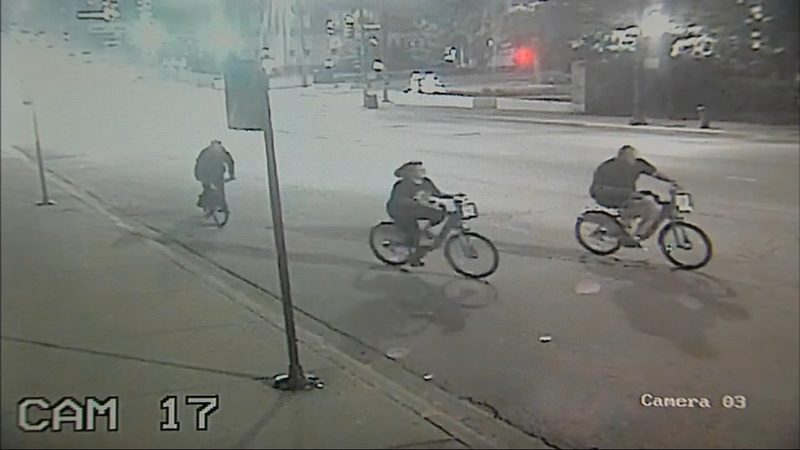 CHICAGO (WLS) -- Police are searching for a hit-and-run driver who critically injured a man on a Divvy bicycle in the River North neighborhood Tuesday morning.

The 32-year-old bicyclist was riding westbound in the 400-block of West Grand Avenue at about 1:14 a.m. when police said he was struck by a dark-colored sedan, possibly a Honda or Toyota. The bicyclist was transported to Northwestern Memorial Hospital in critical condition.

A witness who was riding her bicycle with the victim said she saw the driver speed off westbound on Grand Avenue. She was not injured, police said.

Surveillance video shows the man and woman riding on Grand Avenue while another man not traveling with them trails behind them.

The man on the bike is seen veering a little into the street, away from the curb, when the sedan zooms by and crashes into the man just out of frame, narrowly missing the woman. The third man hit his brakes, reacting to what he just witnessed.

"When a car is traveling 20 mph, 9 times out of 10, someone is going to survive that crash," said Jim Merrell, of the Active Transportation Alliance. "Going 40 mph, those numbers flip and 9 times out of ten we're going to see a fatality."

This is the second hit and run involving a cyclist being injured in the past week. Divvy user Joel told ABC7 he was struck, also in River North, just minutes before coming across our camera.

"I was waiting in the bike lane at Grand and State. The guy wanted to make a right turn. He had a very large rear view mirror. He just went up and hit me with it so I would get out of the way," he said.

Since their inception, share-ride bikes have become a popular mode of transportation, whether for impromptu rides or short commutes to work. In spite of this most recent incident, they are also involved in fewer accidents than cyclists on regular bikes, both in Chicago and nationwide.

"We think that's because they're often - just like the Divvy bikes - large, brightly colored heavy bikes that move pretty slowly, so people aren't able to get themselves into a situation that might lead to a crash," Merrell said.