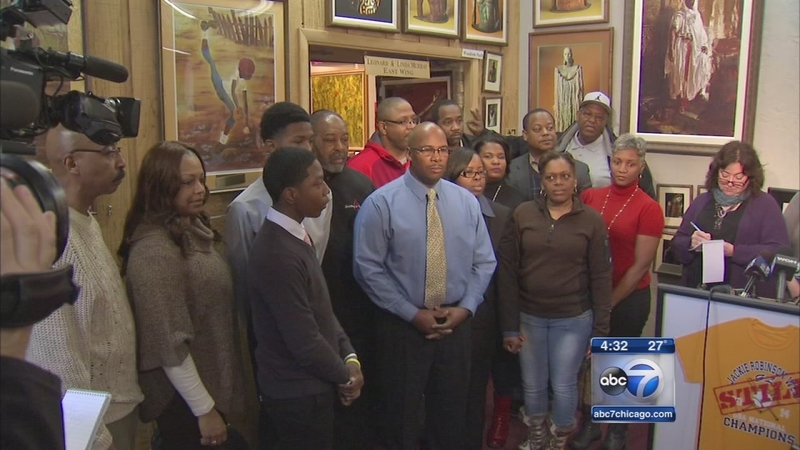 CHICAGO (WLS) -- A lawyer for the parents of the Jackie Robinson West players stripped of their 2014 World Series title says the main goal of a lawsuit filed last week is to seek reinstatement for the championship team.

New details were revealed Monday during a news conference about a lawsuit filed by parents of the players.

The team's title was taken away after it was discovered some players didn't meet residency requirements.

JRW captured the hearts of many people in Chicago and across the country after winning the U.S. Little League Championship. The all-black team represented the South Side, where some areas are plagued by violence. The team met President Barack Obama at the White House and was cheered by thousands at a rally in Millennium Park.

The lawsuit filed by the families of JRW players claims team officials and Little League concealed the residency information to benefit from attention the team was getting. The lawsuit also claims that ESPN broadcaster Stephen A. Smith defamed players' parents by implying they were involved in the alleged fraud.

James Karamanis, the lawyer representing the players' parents and coach Darold Butler, says at every turn, the parents submitted the proper documents for their children and thought their children were eligible to play on the team. Karamanis contends JRW was allowed to play through the regional tournament without complaint, and that league rules specify all residency challenges must be filed before the regional tournament ends.

Karamanis said the league president let the players attend special events at the White House and MLB World Series after the win, while saying there was wrongdoing, then signed a new TV deal for Little League.

Karamanis said he's not conceding the players didn't live within the boundaries, but that the JRW-submitted map was verified as legal during the regional tournament.

When asked why the lawsuit was brought now, Karamanis said the statute of limitations was running out. Defamation lawsuits have a one-year statue of limiations.

Little League issued a statement saying in part: "Little League International stands by its decision and actions as announced on February 11, 2015....at this time it would be inappropriate to comment further while the legal process evolves."

JRW parents allege they and their children were led to believe they were eligible by JRW's former treasurer Bill Haley. Last February, Little League took the title from the team alleging boundary maps were inappropriately changed, making some players ineligible.

Chris Janes, at the time with Evergreen Park Little League, lodged the complaint to Little League, and according to the parents, invaded their families' privacy by obtaining personal information. Karamanis said the rival coach is also named in the lawsuit because he publicly stated that he somehow had access to JRW parents' license plate numbers.

A spokesperson for ESPN tells us, "We have not seen the lawsuit so it would be inappropriate to comment."