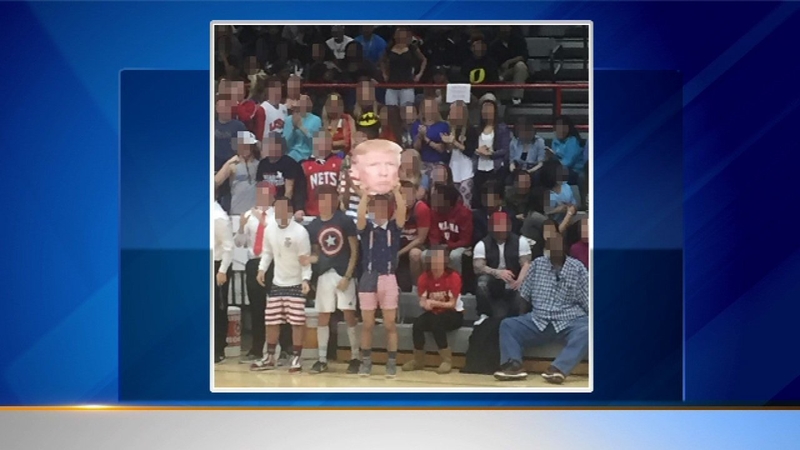 Fans accused of being racists at game

A high school basketball game between two northwest Indiana Catholic school rivals turned controversial Friday after fans on one side allegedly started chanting things that their opponents felt were racist toward Latinos.

"The student body for Andrean had big placards with the face of Donald Trump and they also were yelling, 'Build a wall, build a wall,'" said Vincent Soto, a fan for Bishop Noll Institute.

The game between Bishop Noll, which has a largely Latino student population in Hammond, and Andrean High School in Merrillville included the usually back-and-forth chanting and taunting.

Fans on both sides said they have had a friendly rivalry for years.

"It was jovial," said Andrean parent George Galanos. "It was a lot of fun. There was hugging going on between the teams."

But some Bishop Noll fans said a line was crossed.

"I understand they're kids," said Ashley Howard, a fan who was at the game supporting her cousin who goes to Bishop Noll. "You expect them to make mistakes. Maybe they didn't know how far to push the envelope because they are rival schools, but that's what the administration is for and that's where the administration is supposed to step in and say, 'hey kids, that's not ok.'"

However, on social media Saturday, Andrean fans insist it was not their intent to offend and that last night's USA theme is one they've used at other games. They added that the Trump imagery was not meant to be racist.

Andrean parents who were at the game are dismayed by the controversy.

"The Bishop commented on how well the kids were with each other," Galanos said. "There was no animosity going on at the game. You had Andrean people mixing and intermingling with Bishop Noll, and Bishop Noll intermingling."

Bishop Noll released a statement tonight that read, in part, "The accusations being leveled against Andrean are being taken very seriously by Bishop Noll Institute ... This is a teachable moment for everyone about responsible speech, social media, and sportsmanship. Perhaps last night's incident was an unfortunate byproduct of irresponsible speech in today's political arena."