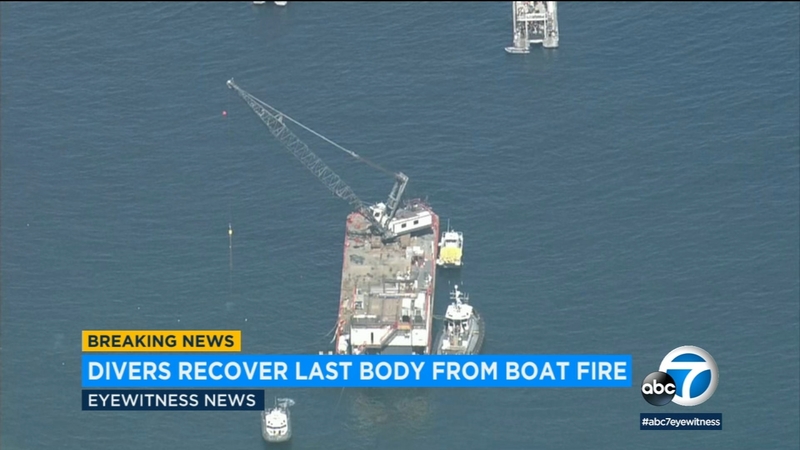 Salvage efforts resumed Wednesday at the scene of the deadly fire and sinking of a scuba diving boat filled with passengers that erupted in flames off the coast of Santa Barbara last week.

The Conception Incident Unified Command is relieved to report that search and recovery efforts today were successful in locating the last missing victim. DNA testing is still being conducted to confirm identities of 7 of the 34 victims recovered.#conception

The victim is one of 34 who died at sea in the early morning blaze on Sept. 2 near Santa Cruz Island. Five of the Conception's six crew members survived after multiple attempts to save the others who were trapped below deck.

RELATED: Santa Barbara boat fire: Owner says crew 'had no choice but to evacuate the boat'

A criminal investigation of the fire is being handled by the Coast Guard, FBI and U.S. Attorney's Office in Los Angeles.

Federal officials said the FBI and the Coast Guard are working on the investigation jointly. The FBI doesn't investigate such a case unless it's possibly criminal, according to ABC News.

The news came just one day after search warrants were served at the company that owned the scuba diving boat that caught fire.

Authorities have said the victims, 21 women and 13 men from 16 to 62 years old, appear to have died from smoke inhalation.

Investigators are trying to determine if the fire could have been prevented and if anyone is personally responsible. They are looking at a number of safety issues including whether a night watchman was on duty when the fire broke out.