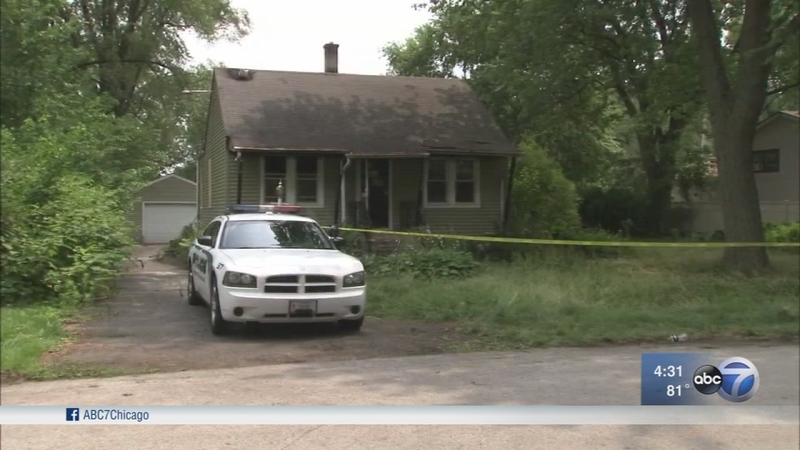 MARKHAM, Ill. (WLS) -- The body of a young child was found Monday inside a burning home in the south suburban Markham.

The Cook County Medical Examiner's Office has yet to determine the child's age, gender and cause of death.

A fire broke out around 6 a.m. Monday at a home in the 15400-block of South Hamlin Avenue. Firefighters found the body of what appeared to be a baby girl about 1 year old wrapped in plastic after the fire was out, while they were conducting a search of the home.

Neighbors said the home's elderly owner moved out more than a year ago and it has been vacant and on the market since. However, one woman said she did notice some suspicious activity over the last few days.

"Just a strange car in the last week. Police have all the info. I believe they will be onto something soon," said Dianne Stahl, neighbor.

The cause of the fire is still under investigation. Realtors said the home has been on the market for about a year and they had been showing it. They said it appeared someone had broken in through the back of the home.

The home is located in a community filled with families and young children.

"It's devastating. It's terrible. I know different things happen in different people's neighborhoods. You just wouldn't think it would happen in your own backyard," said Rebecca Orris, who lives in Markham.

"Where's this baby from? For one, you know, it's like. I don't know. I'm just disgusted," said Ron Dunbar, neighbor.

Neighbors expressed concern that if the child was murdered and the home set on fire to cover up the crime, the killer could still be in the area and could do it again.

Community activist Andrew Holmes pleaded with the public for their help.

"If you knew, or know, anyone that was expecting or had a child and you don't see them no more, give the Markham Police Department a call ASAP because this could've been prevented," Holmes said.

Holmes passed out flyers in the neighborhood, hoping to help bring information to light.

"Someone knows someone that's missing a baby. Someone's family knows they're missing a loved one and they need to come forward if indeed the mother doesn't come forward, because this ain't going anywhere. I mean, it's a crime," he said.

Markham police have not given any indication that the community is at risk.