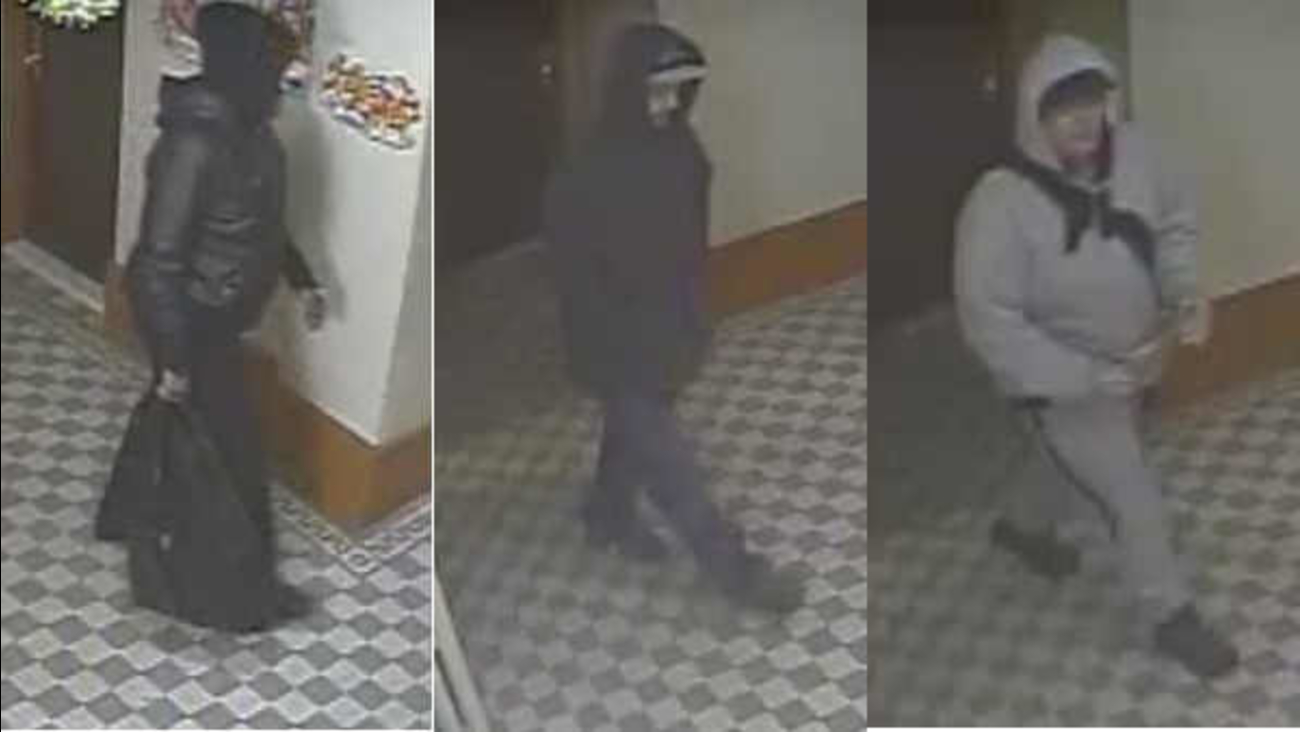 NEW YORK -- Police are searching for three suspects who robbed an elderly woman during a home invasion at her Bronx apartment, and they are hoping surveillance images will lead to arrests.

Authorities say the 82-year-old victim answered a knock at the front door of her Prospect Avenue home in the Claremont section around 10 p.m. on December 20.

The man at her front door reportedly told her that he had a package to deliver, and when she opened the door, two men and a woman pushed their way into the apartment, displayed a firearm and bound her with duct tape.

She told Eyewitness News that she pleaded for mercy, asking the suspects if they had a grandmother. In response, the female suspect slapped her in the face.

She covered her face for the interview and rocked back and forth, a clear sign she has been robbed of the sense of security she's enjoyed in her apartment for 40 years. The quotes are translated from Spanish.

"When they knocked on my door, they held up package they said was for this apartment," she said. "I said what package? What gift? For me?"

She described how they dangled a wrapped Christmas present in front of the peephole, duping her into opening the front door.

"They came in...they pushed me in my back, dragged me and and threw me on the floor," she said.

Once on the floor, she says they wrapped duct tape on her wrist and mouth, and then pulled out a gun and threatened her.

The suspects ransacked the apartment, but the only cash they grabbed was $5 that had been placed in a ceramic figurine near the front door for good luck. And all of it happened while her husband made a quick 30-minute trip to the store.

"When I came upstairs, the door was open," he said. "She was on the floor, kicking, and was tied up, and said they attacked me."

The first suspects is described as a Hispanic female in her early to mid-20s, approximately 5-foot-7 and weighing 160 pounds. She was last seen wearing a gray hoodie, long braids, a blue cap and black shoes.

The other two suspects are both Hispanic males in their early to mid-20s, both about 5-foot-8 and weighing between 150 and 170 pounds. One was wearing a dark gray hoodie and blue jeans, while the other was wearing a gray cap, gray shirt, dark leather jacket and dark pants.

All calls are strictly confidential.