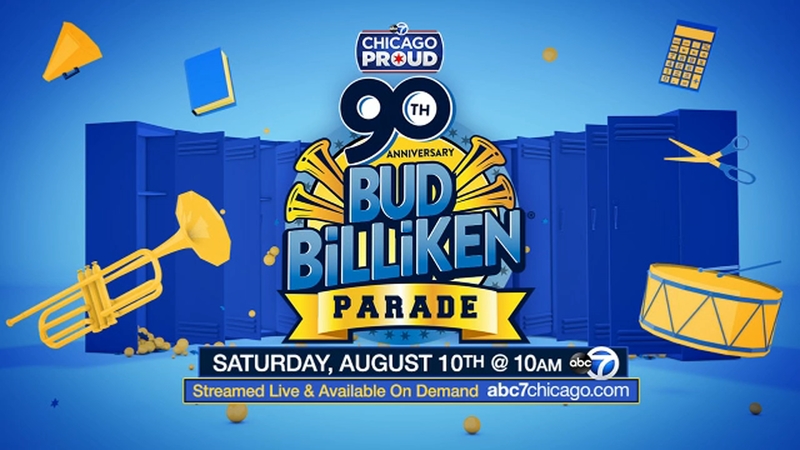 CHICAGO (WLS) -- ABC 7 is CHICAGO PROUD to be the only TV station in town broadcasting the 90th Annual Bud Billiken Parade, live, Saturday, August 10th, from 10:00 a.m.-12:30 p.m. on the station's main channel ABC 7, abc7chicago.com, and the ABC7 News App. The entire broadcast is now available on-demand at abc7chicago.com.

ADORABLE: The 'coolest one in the school'
EMBED More News Videos

5-year-old girl tells ABC 7's Karen Jordan how excited she is to start kindergarten while attending the the 90th Bud Billiken Parade.

Once again, the team of ABC 7 Eyewitness News Anchors -- Cheryl Burton, Hosea Sanders and Jim Rose captured all the fun for viewers watching at home. ABC 7 Anchors Terrell Brown and Karen Jordan were also a part of the festivities, checking out the action along the parade route. Actor and comedian, Lil Rel Howery, who hails from Chicago's West Side, served as the 2019 Grand Marshal. Lil Rel also made an appearance in the ABC 7 broadcast booth to talk about his Chicago roots and Bud Billiken Parade memories.

The theme for this year's parade is "90 Years of Excellence." Grammy-Award nominee BJ The Chicago Kid and Academy-Award winner Che "Rhymefest" Smith were honorary Marshals.

Celebrating in the annual tradition were members of the ABC 7 Eyewitness News team including, Ravi Baichwal, Liz Nagy along with ABC 7 Windy City LIVE's Val Warner and Ryan Chiaverini, who rode atop the station's colorful float.

The Robert Sengstacke Abbott Foundation produces the Bud Billiken Parade; ABC 7 is a sponsor and produces the parade broadcast.

According to John Idler, President & General Manager, ABC 7 "The Bud Billiken Parade is steeped in Chicago tradition and has been celebrated by families every summer for generations. I'm proud of our partnership with the Robert Sengstacke Abbott Foundation and the fact that we are the only TV station in Chicago to broadcast the parade for the entire community."
"This year we are celebrating 90 years of Legacy and Academic Excellence. We are so grateful for ABC 7's coverage of the Bud Billiken Parade and the amazing team of anchors who continue to participate and support our legacy and tradition," said Myiti Sengstacke-Rice, Bud Billiken Parade Chair and President/CEO of the Robert Sengstacke Abbott Foundation (formerly Chicago Defender Charities, Inc.).