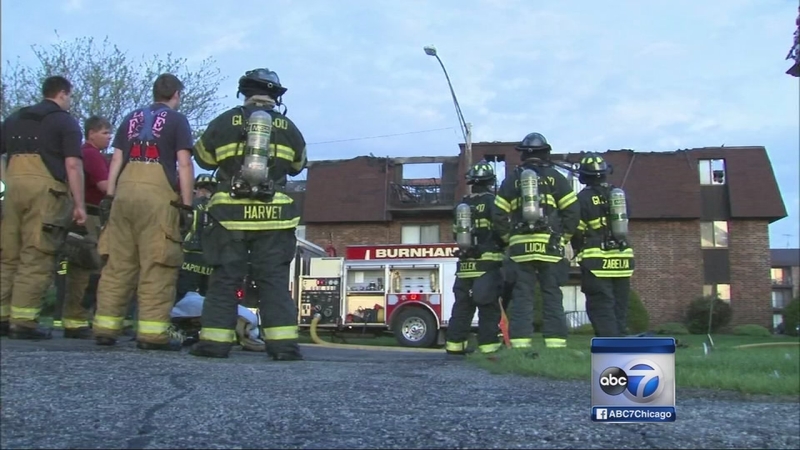 BURNHAM, Ill. (WLS) -- Investigators are looking into what started an extra-alarm fire in south suburban Burnham and whether there are water pressure issues in the area that need to be resolved. 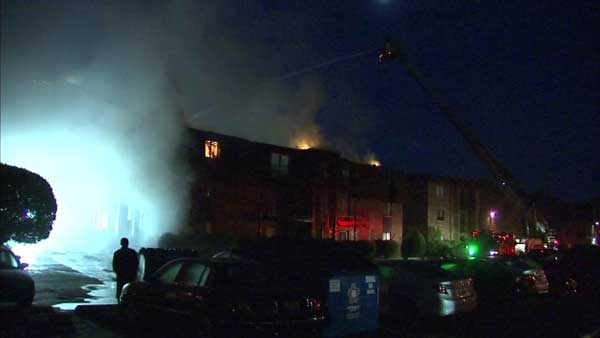 The blaze broke out just after 3:10 a.m. Monday in a multi-unit apartment building in the 14500-block of South Muskegon Avenue. The fire spread quickly through the entire third floor, which was gutted, and thick black smoke billowed from the roof.

Fire crews from Harvey, Hazel Crest, South Holland and Calumet City were called to assist Burnham firefighters. The fire was out by around 5:40 a.m.

Early scanner reports indicated firefighters needed help getting the water they needed to douse the flames.

"Yes, the water pressure was low. When the pressure is low the reserve comes from Calumet City. Then Cal City can boost the water supply up," Mayor Robert Polk said.

"For a fire of this size, frequently we need water supply assistance from other grids. Our nearest grid is across State Street in Calumet City," Burnham Fire Chief Andrew Horberg said.

Investigators plan to look into whether there are water pressure problems in the area that need to be addressed.

Some residents said they were woken up by Burnham police going door-to-door to evacuate the building. Others were alerted by neighbors.

"I was awakened by the smell of smoke and people banging on the door. I opened the front door and black smoke came in. I immediately dropped to the ground and crawled out. I came out and within a few minutes the whole roof was on fire," said Frank Moore, who lives on the third floor.

Residents huddled under blankets outside to ward off the early morning chill.

"They just ran out with whatever they had on. We offered them robes and clothes. The adrenaline kept them warm," said Trina Anthony, who lives next door.

"I instantly broke down because my prom dresses, my graduation dresses, my pictures - everything was in there," said Kamari Donaldson, who lives on the second floor.

Horberg said no one was hurt in the fire.