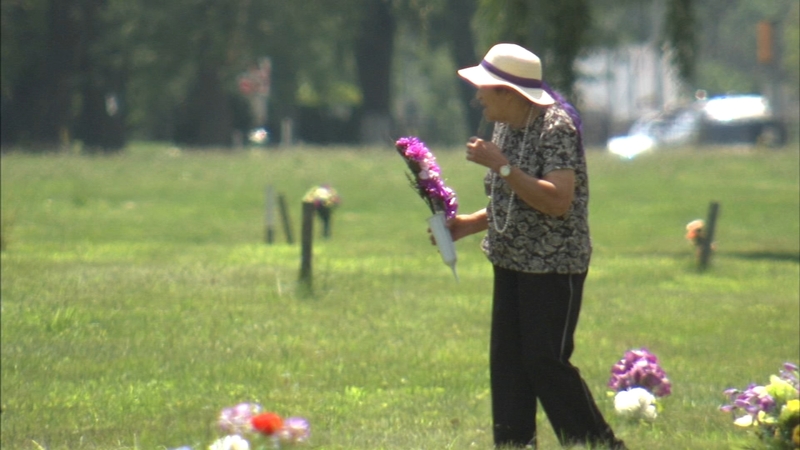 ALSIP, Ill. (WLS) -- The Friends of Burr Oak group gathered at Burr Oak Cemetery on Tuesday to mark the 10th anniversary of a grave-selling scheme that was exposed in Alsip, Ill.

Four cemetery employees were convicted of digging up bodies and selling plots.

Norma Wright said she has four family members buried in Burr Oak Cemetery. She said her uncle's 1989 burial is one that she'll never forget.

"I happened to notice they'd buried my uncle on top of somebody, on another casket," Wright said.

At the time, Wright said she thought it was strange, but not scandalous, until 2009 when the Cook County Sheriff's Office uncovered the huge scheme.

Cemetery employees were reselling graves to grieving families and pocketing the money. They would dig up remains and bury new bodies in their place or, in Wright's uncle's case, bury caskets on top of each other.

Wright said she still has no idea where any of her relatives are buried.

"How could they do that, what rights to do that," Wright said.

The four cemetery employees were convicted in the scandal, including the manager, who received a 12 year prison sentence.

Ten years later, the historic black cemetery is under new ownership. Money from a trust fund helped pay for a new memorial and new fencing, but many family members with loved ones buried here said there are still many problems.

Shapearl Wells has several family members buried at Burr Oak Cemetery, and she said she does not like the cemetery's current conditions.

"I have nine family members who are buried here, and the conditions of the cemetery we find to atrocious," Wells said.

Conditions like potholes, flooding, overgrown grass, and a decades old marking system that makes it difficult for families to find graves.

"It's not fit for the dead to be buried here," said Zeola Thomas Hill, who has relatives buried in Burr Oak Cemetery

Friends of Burr Oak also gathered on Tuesday to call on the new owners to clean the cemetery.

"Some of the roads have been done as recently as last week. We expect a large part to be taken care of this summer," Carter said.