4 dead identified as cause of California bus crash probed 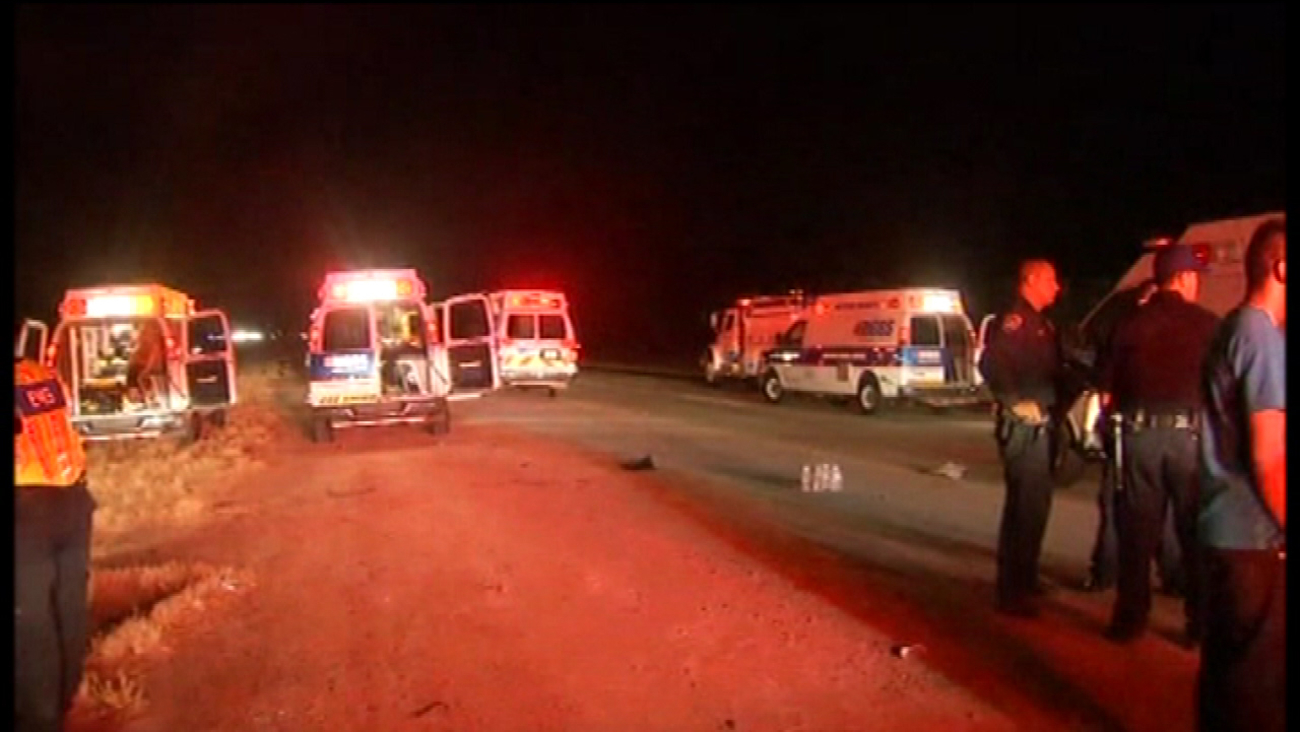 The California Highway Patrol says the tour bus was carrying about 50 people when it crashed into a highway pole at 3:30 a.m. on Tuesday August 2, 2016.

ATWATER, Calif. -- A husband and wife traveling from Mexico to see their daughter in Washington were among the four identified Wednesday as those killed when a bus slammed into a highway sign that tore through the vehicle in California's Central Valley.

The identities were released as investigators started piecing together what led to the crash early Tuesday. Among the possible factors being examined are driver fatigue and mechanical problems.

"At this point we don't know what occurred immediately before the crash," said Don Karol, a senior highway accident investigator for the National Transportation Safety Board.

PHOTOS: Tour bus crashes in California
At least five people are confirmed dead after a tour bus crashed on a highway in California.
Driver fatigue is a natural place to look considering the collision happened around 3:30 a.m., said Henry Jasny, senior vice president of Advocates for Highway and Auto Safety.

After 10 hours continuously behind the wheel, bus drivers must be off for eight hours. Truckers are allowed to drive 11 hours, but have longer required rest periods at 10 hours.

It's unclear how long driver Mario David Vasquez, 57 of the Los Angeles area, had been behind the wheel. Investigators have not been able to interview him because of his injuries, California Highway Patrol Officer Moises Onsurez said.

"The consequences are very serious in terms of the numbers of lives at stake on a bus," he said.

There were 27 people, including the driver, aboard when the bus struck an exit sign post amid San Joaquin Valley farmland, officials said. Of the survivors, seven suffered major injuries, and 16 had minor to moderate injuries.

The California Highway Patrol initially reported five deaths, but Merced County Sheriff Vern Warnke lowered the count to four after canvassing hospitals and the coroner's office in an adjacent county.

"It was chaotic," CHP Capt. Brian Hawkins said of the miscount.

The crash split the bus down the middle. The local sheriff has said rescuers pulled "bags of body parts" from the bus. Some survivors suffered severed limbs.

Investigations into such crashes can last months before a probable cause is determined.

The probe will also look into possible distractions or medical issues the driver suffered, as well as other drivers or hazards in the road and whether the bus company had a culture of safety problems.

Officials said they want to give answers to the survivors and the relatives of those killed as well as make bus travel safe.

The dead include Fernando Ramirez, 57, and Petra Carillo Ruiz, 64, a married couple from Mexico traveling to visit a daughter in Pasco, Washington.

The final victim was identified as Jose Morales Bravo, 58, who lived most recently in Avalon, California, but came from Concepcion de Buenos Aires in the state of Jalisco, according to relatives. Officials said Bravo's wife was among those hospitalized.

Eva Maria Morales wept as she talked about her father, Jose Morales Bravo.

"He was a good father," she said in Spanish from her home on Santa Catalina Island, off the Los Angeles coast. "He loved being with his children."

She said her parents made sure to visit all their children at least once a year and had most recently left Catalina for Washington state, where two of them live. Morales said her mother is expected to survive.

Moments before the crash, it appeared the driver was trying to pass another vehicle that he apparently expected to yield, but it would not let him merge, passenger Nakia Coleman told Washington state's Tri-City Herald newspaper.

The bus was traveling north on State Route 99 when it crashed, only a few miles from its next stop, where it was scheduled to change drivers.

Passenger Leonardo Sanchez was sleeping peacefully on the bus carrying him to Oregon to pick blueberries when he was suddenly thrown face-first into the back of the seat in front of him.

He said only about eight people, including himself, escaped largely unscathed.

"We couldn't pull people out because there was shattered glass everywhere, seats destroyed," Sanchez said.

Some victims were thrown from the bus into a ditch.