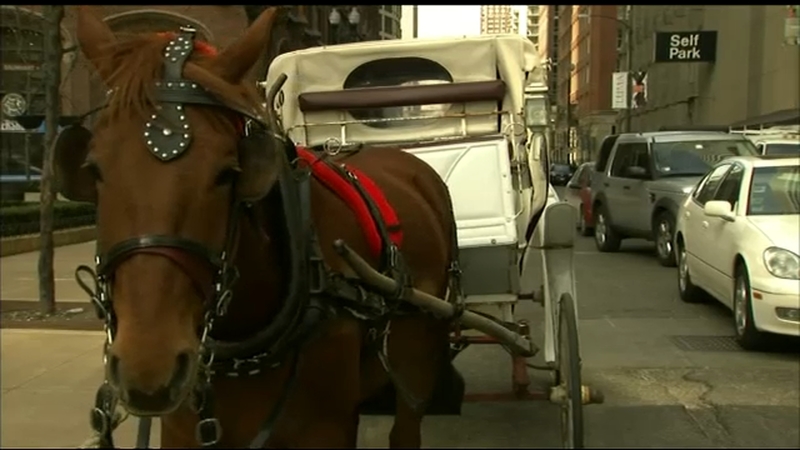 CHICAGO (WLS) -- It's an old-fashioned mode of transportation that's putting a controversy back in the saddle.

You can still catch a horse carriage on Chicago's streets, but a new fight is aiming to keep the tradition in the past.

Bad weather is bad for business as carriages and the horses that pull them sit idle on rainy days, but one group says Chicago carriage operators should be out of business no matter what day of year it is.

The Chicago Alliance for Animals dropped off over 20,000 signatures in support of a horse carriage ban to Mayor Lori Lightfoot's office Wednesday.

"Chicago's horse carriage operators continually refuse to follow the law," said Jodie Wiederkehr with the Chicago Alliance for Animals. "They overwork horses on a regular basis, not provide water and work horses when it's too hot."

The animals rights organization said it has proof to back up their claims.

"We document the horse, we document the markings on that horse, and the driver and the carriage to prove it is the same horse that has been working the entire day," Wiederkehr said.

The group blames the city for not enforcing the laws and is urging City Council to take up a proposed ordinance to ban horse carriages.

"They are allegations. I know in my heart that is not true," said Debbie Hay.

Hay is the owner of Antique Coach & Carriage, the largest operator in the city. She disputes the allegations that her horses are abused. Hay said her animals rotate back to her farm in Homer Glen regularly, adding that rotation is more often lately because business has declined in the past two years.

"It's gone from a decent size income to a quarter of income," Hay said. "I think propaganda of the animal rights agenda has infiltrated my client base."

The ordinance to ban horse carriages is likely to be on the City Council's licensing committee next week. The Chicago Alliance for Animals believes there are enough votes for it to pass.
Report a correction or typo
Related topics:
businesschicagoloophorsesanimalhorse drawn carriagesanimal rights
Copyright © 2021 WLS-TV. All Rights Reserved.
More Videos
From CNN Newsource affiliates
TOP STORIES