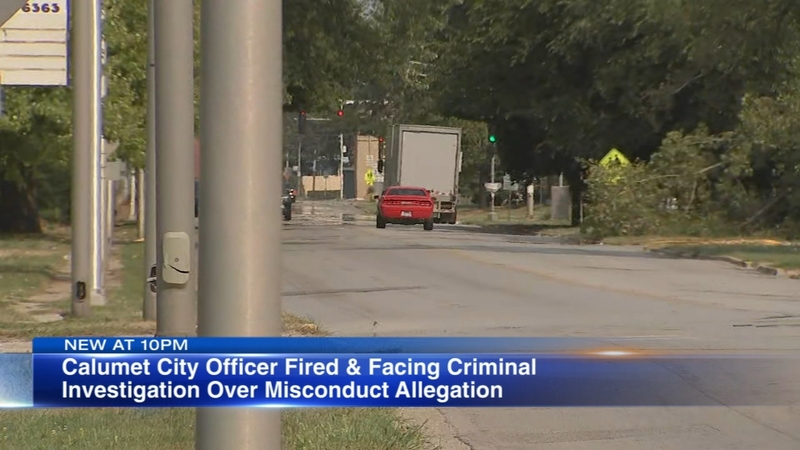 CALUMET CITY, Ill. (WLS) -- A Calumet City police officer has been fired after being accused of sexually assaulting a woman during a traffic stop.

LaToya Thompson said she was driving through Calumet City at about 2:30 a.m. on Aug 23 when she was pulled over. She said the officer, a 12-year veteran of the police force, ordered her out of the car and began making lewd comments and touching her inappropriately.

Her attorney said the officer only left after getting a call from dispatch.

Calumet City police initially said the accused officer "was immediately removed from assignment without pay, pending termination proceedings" and a "criminal investigation into the allegations is being conducted by an outside agency."

Tuesday night Mayor Michelle Markiewicz Qualkinbush and Police Chief Christopher Fletcher said the officer had been terminated. They also said they will work to support the Illinois State Police's criminal investigation of the incident.

Thompson initially posted about the assault on social media only, saying she didn't think she was going to be heard. The city said when the post was brought to their attention, both Mayor Qualkinbush and Chief Fletcher reached out to Thomspon.

"So many times, in the climate we're in now, I wanted to reassure her that this allegation was going to be taken seriously," Chief Fletcher said. "If the investigation proved credible, we were going to act on it. That's precisely what happened. I want to thank her again for her courage in letting us know this happened so it never happens again."