Tornado damage in Cameron, Illinois, to be assessed No injuries in IL tornadoes

CAMERON, Ill. (WLS) -- As many as six tornadoes were reported Thursday evening in western Illinois. The towns of Cameron and Delavan were hit just before dusk.

No one was seriously injured, Galesburg Fire Chief Tom Simkins said, but 50 homes were damaged in Cameron. The National Weather Service will survey the damage to determine the strength of the tornado on Friday.

"The force that came through this small town was tremendous," Illinois State Police Trooper Jason Wilson said. "There is no doubt about that." 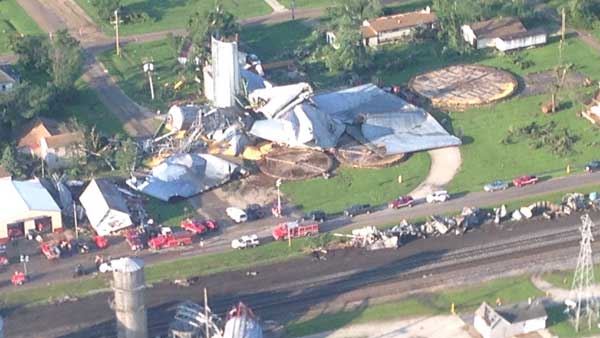 The strong line of storms stretched from Galesburg in western Illinois to the western suburbs of Chicago. The tornado hit Cameron around 7:30 p.m., flattening garages, ripping roofs off homes and twisting metal grain bins.

""What I have to credit this town for is that every resident said, 'This is serious. I need to go seek shelter now. I'm not going to take the chances. I'm going to go inside, protect myself and my family and survive this incident,'" Trooper Wilson said.

No one was allowed into Cameron except first responders and Illinois State Police, who conducted search and rescue operations through the night. Many of the town's 600 residents didn't see the extent of the destruction until the sun came up Friday.

In Delavan, which is about 80 miles south of Cameron, the damage was much the same. And, again, no one was injured.

"We were very fortunate. The tornado started on the southwest side of town, veered in a little bit and veered back out," Delevan Mayor Liz Skinner said.

"My friend that I'm staying with called me and said we had to go into the basement," Maddie Shue, Delevan resident, said. "There were branches. You could see them flying across the windows."

Cameron resident Mike Trout, 50, took refuge in his basement during the twister. Trout said all he could hear was roaring wind and shattering glass. Every window in his house was shattered and a 2-by-6-inch piece of lumber pierced through a wall of his home.

"I lived in this town in 1989 when the last tornado touched down," he told the Galesburg Register-Mail. "The damage this time is far, far worse; 1989 doesn't even compare to this."

"There's nothing you can do about it. I'm not hurt. None of them are hurt. Everything can be replaced eventually," Tom Trout said.

Wind gusts of up to 80 miles per hour were reported. The storm also unloaded up to four-and-a-half inches of rain. Several gas leaks were reported. Local electric utility Ameren Illinois said thousands of customers in the area were without power.

A temporary shelter has been set up at United High School in nearby Monmouth, Illinois. The Galesburg Register-Mail said the Red Cross set up a shelter at the Monmouth Armory. About 20 residents were being helped there Friday morning.