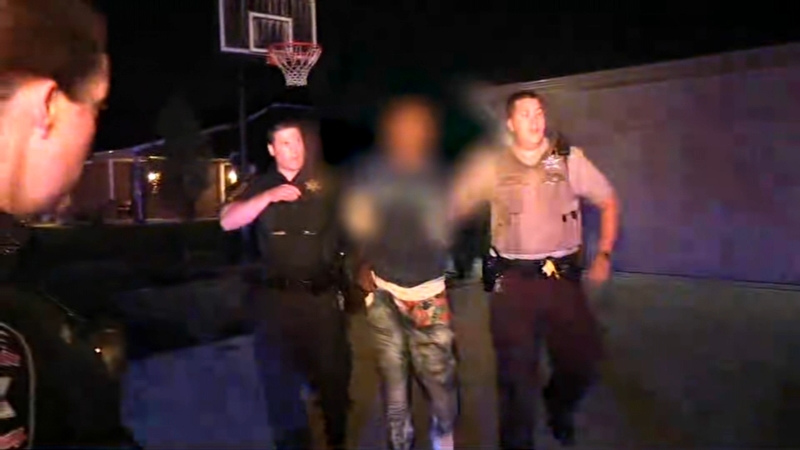 WILMINGTON, Ill. (WLS) -- Two juveniles were charged after a carjacking in a south suburb that led to a high-speed police chase and crash Wednesday morning.

Police said one of the suspects held a driver at gunpoint in Calumet City Tuesday night and stole his car.

Police in Wilmington, Ill. search for a suspect after a carjacking and police chase Wednesday, sources said.

The duo, both 17, then led police on a high-speed chase, at one point reaching speeds of 130 mph through Dolton and Harvey, according to a source. They then took the chase onto I-57, later crashing the stolen car in Wilmington and fleeing the scene.

It was just after 5 a.m. Wednesday when a Will County homeowner's dogs started barking.

"I grabbed my pistol and I called, 'If somebody is in the house, leave now,'" said the homeowner, who asked not to be identified. "He hollered back, 'I'm not leaving.' I fired one shot and I said, 'Won't fire another shot if you leave now' and he said, 'I'm not leaving.' I just said, 'Go out the way you came and I won't shoot again.' He said, 'I don't want to die tonight.' I said, 'You shouldn't be in somebody's house,' and he took off out the back."

One of the suspects was found minutes later armed with a knife and hiding underneath a trampoline.

His partner-in-crime, however, remained at large for hours, sending the entire area into a lockdown as dozens of officers from different jurisdictions, swat teams, K9 units and even a helicopter took part in the manhunt.

"Better safe than sorry," said City of Wilmington Police Chief Phillip Arnold. "We don't want people coming out of their house. We had officers all over."

Wilmington's school district, which just started classes last week, shut down for the day as the search continued. By 9:30 a.m., it was all over when a homeowner spotted the second suspect peering out from inside his pole barn.

Police were already nearby and the suspect was taken into custody within minutes.

The Wilmington Police Department said the juveniles are charged with home invasion, burglary, obstructing justice and fleeing and eluding.